Are you watching closely?

Magic is the art of manipulating attention. Any time a magician says okay, so here’s the trick, or now here’s where the trick starts, they are straight-up just lying. Any time a magician says now watch closely, there is nothing for you to see. It’s one of the tools of the magician, to simply direct your attention to something, because it’s something that doesn’t matter any more when they tell you to do that.

Magicians want to control your attention and any time you think they’re showing you something, they’re trying to make sure you see nothing. 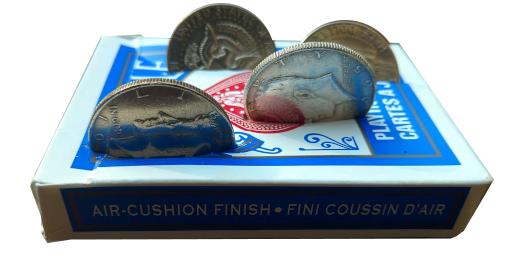 One of the channels we’re going to talk about this month, Sankeymagic, by Jay Sankey, shows a lot of great examples of this. Lots of magic channels show tricks and sell gimmicks (as well they should – I don’t think anyone should regard gimmick purchases as bad). Jay doesn’t seem to have a big distribution system for his work – instead, he tries to sell digital distributable versions of gimmicks which means he sells pdfs of books and diagrams. In order to promote that stuff, though, he will regularly show videos explaining how to make Gimmicks – sometimes with printed labels to make tools for other magic tricks.

He refers at times to this as brute techniques – like in this video, showing a great example! This shows you a set of different spiderwebbing techniques for a magic trick based around a gimmick’d box of cards. And you might – with good reason! – think hang on, that’s such a simple object, is that a gimmick? The point is not that gimmicks are complex, the point is that they change when the trick is happening. You can build a gimmick or prop a month in advance, and then a large portion of the trick has been handled.

This is one of those lessons for game design, by the way! You can make components, or background lore, or standard game pieces that you create ahead of time, do work so that players don’t have to do that work on the spot. It’s a great lesson about offloading work.

A RPG Sourcebook that contains massive, detailed explanations of important characters and their places in the world, or where chunks of dungeon or monsters are just waiting in a book to be quickly slapped into place means that you’re trading book space and the work of designing those components (and balancing them!) ahead of time so that you can just make it happen during the game quickly. This is that same exchange; you do work earlier so the player doesn’t have to do the work on the spot.

In this way, some games, like Forged in the Dark Engine games do a lot of creative work ‘on the spot’ – and even then, the game has done a lot of work ahead of time by creating a very consistent, very coherent mood. In Blades in the Dark, you’re not going to be dealing with thirty different kind of problem: you’re going to be dealing with thief stuff. By controlling and focusing the player’s attention (see, see) on a particular genre and style of story, you’re making it so the on-the-spot creativity asked of the game runner is able to use a smaller number of reasonable solutions.

There’s even some work done offloading onto players! In fiction-first RP, because the player has to come up with a justification for how their ability applies to the problem presented to them, the GM has one more source of the narrative being done without them needing to manage all those pieces. Now, this isn’t just a trick the game does to make life easier – it’s kind of the point of fiction-first roleplaying games! Still, the principle applies:

Work you do yesterday is work you don’t have to do today. Be aware of what you’re trading off, and what does – or doesn’t – need the work you’re putting into it.