Hey, here’s a thing that I find difficult.

Content warning: I’m not nonbinary, and I’m going to talk about nonbinary identities. This is naturally fraught and I’m not going to pretend that I’m an expert, or that I can’t make mistakes. Cool? Cool.

Now to get dork cards on the table, this is something that started out because I was making superheroes for roleplaying on City of Heroes. This is some nerdy stuff, right? And I’ve mentioned in the past that I have a spreadsheet for this stuff. One of the columns in that spreadsheet is character gender. Once upon a time, I’d have had that as one of two options – a character is male or female, right?

Since then I’ve become a little bit better informed.

I used to make mostly male characters. I made a few girls (while embarrassed at how good they looked and how many cool costume parts and great hair they got). The idea at the time was that it was inappropriate or creepy for me to make women superheroes. Especially with all the seeming-dudes around me who made superheroines, then became real life superheroines. I didn’t want to be seen as invading that space. I didn’t want to be leering at my girl heroes nor did I see myself as being my superheroes. They were characters I made, to play in a narrative space. I wanted to write about them and I wnated to share their stories.

Without getting to the level of backstory people joke about in cooking blogs, I’ve come to understand that if I’m going to make stories about Black Widows and Power Girls, I want to make my own rather than rely on other people to play them in my space around me, and there’s nothing wrong with that. But the time spent breaking down that wall and recognising that these characters are all just pieces in narratives I want to share means addressing types of characters that I have the least experience with:

That is, nonbinary, genderfluid, and genderless superheroes.

And it starts with names. 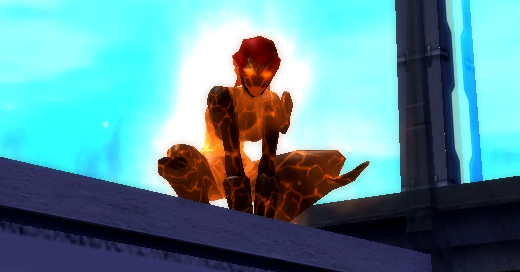 Look, this isn’t a guidebook or a set of rules. I am outside. It’s much more about the specific, individual quirk of character design that comes from when you want to handle giving a character a name. Not a superhero title – those are good, those are important, and I love them to bits, and they’re also important to get right, but characters who are from a superhero society are from a society like ours. They have names and identities and sometimes bank balances and all that jazz.

There’s a ton of stuff that names do. If I tell you a character is named Hitomi or Scott, you can immediately put that name within a context, and if that character deviates from that context, it is in contrast to that context. A non-Japanese person named Hitomi is going to earn surprise – that’s something that begs explanation.

In a weird way, names are kind of a place we keep gender – not our gender, but some of it. Gender, like glitter, gets there. There are masc coded names and femme coded names, and then, in my society, we have a lot of names that are coded either…

How do you signal a character’s name is nonbinary?

A nonbinary friend said to me once that there was a joke amongst enbies that your chosen name would be just your three favourite letters. That serves as a pretty okay place to start with in my mind because at the very least, you don’t think in terms of ‘a name, but let’s mess with the gendery bits.’ And names do have gendery bits. Names that end with -ette and -vy have a certain femininity that names that end with a -ck and -dd don’t.

This is a real tricky thing to think about, particularly because I’m so steeped in binary thinking that it’s very hard to present nonbinary characterisation from within that binary space. The library of lessons and name references in my head is deep for women and men – but for nonbinary characters, or agender characters…? It’s much shorter, so much so that the main thing you reference by making one of those references (like Yehenni) is to evoke the gender of the character more than anything that character signifies.

The names I have used so far, by the way, for characters that are coded as being external to this are Veni and Jac. Jac’s an archer (he/him) who has a deliberately aggressively femme-pink style wedded to gymnast masc, in an attempt to use the limited expression in city of heroes to make it clear that he’s not typical, gender-wise. Veni (they/them) is a nonbinary mutant with lava powers; joking around a little in my mind about how they’re neither rock, not fire, but also both at once – a sort of riff on the ‘can’t you make up your mind’ you sometimes hear directed at genderfluid people.

I’m not sure where I’m going with this, just that this is a puzzle I haven’t solved, and it’s not like nonbinary people are going to have monolithic advice. What’s more, this isn’t even about being something that wouldn’t upset nonbinary people – this is about character signalling so anyon who reads this story or observes this RP won’t be confused, and have to see and understand that the character they’re interacting with is nonbinary, not ‘actually A or B.’