This is Cae! Cae is my friend. Cae has been my friend for, like, actual literal years now. And this year, Cae has had a pretty wild successful shift in her life, in that she’s… now… a modestly successful Vtuber attached to a notable and successful indie game? 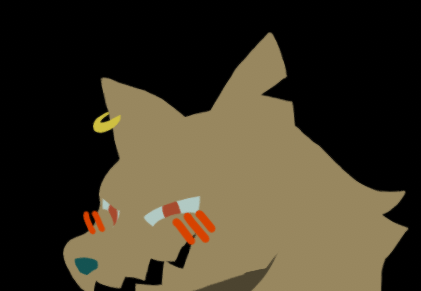 This is (a shot of) Gra. Gra has a longer name, that I cannot remember and do not trust me to romanise properly into English. Gra is a snapjaw, a type of trash mob from the game Caves of Qud. Now, Gra exists in part because turns out that if you’re a queer woman on the internet, showing yourself is going to attract you terrible people, and that means Gra serves a degree of defensive protectiveness. That is a noble and worthwhile thing Gra does.

But you know what else Gra is?

Gra is an amazing performative tool.

Gra is a fluid, immensely flexible and spontaneously creative form of puppet that Cae can make interact with the game, with the screen she’s in front of and also with … just… whatever random bits of emoji, graphics, anything that can be slapped on a screen or a layer in front or behind of Gra.

And Cae plays Gra. Gra is a character and refers to her ‘voice actor.’ In fact, I’m actually kind of unsure if Gra uses she/her pronouns just because Gra is so distinctly a separate character to Cae, her actor, and that’s really interesting. Because she’s live performance, a character played to play another game. And that’s really fucking interesting.

Oh and check her out on Twitch.