I think I’ve given this piece enough time to cook. Let’s get business sorted out nice and early.

Here’s your super simple review: it sucks. Oh, you liked it? Well, great, thanks for bothering to ask. I’m glad we could have this fascinating exchange of ideas. Here’s a link for you to continue the conversation.

If you’re actually interested in why I think this sucks, then here’s a fold and you can meet me on the other side. I’ll spoil some things about the manga and maybe, maybe, I’ll spoil something about the movie, if it warrants discussion. 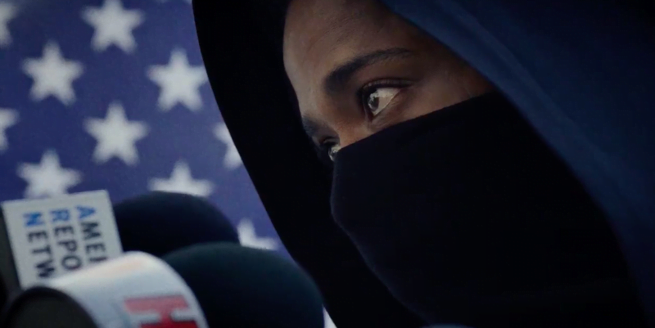 I don’t like this movie, and I’m sure that’s unsurprising, but I did want to, before I went forwards, note three things in this movie that merited some positivity:

The Whitewashing That’s Not

I suppose it behooves me to be fair to this story as much as I can. There’s some talk about the idea that making a Live Action Death Note in the West at all is a betrayal of the canon or a violation of the source material or, to put it simpler, Cultural Appropriation. And boy oh boy if you go looking, you’ll find a lot of the people who are mad about L being black now are also really mad about things like white genocide? So that’s great company to worry about being in.

Anyway, re Cultural Appropriation, it’s not. Like, seriously, your definition of Cultural Appropriation has to be pretty damn broad to the point where it can be ‘white people creating any art at all.’ Death Note is a multimedia franchise that has sold over 30 million copies of books, broadcast in multiple languages and countries, with games, animated movies, novels, eight live action movies one of which was a musical, and acting as if those things will somehow be harder to find if Death Note 2017 – The Netflix Franchise Kickoff exists, especially in the era of hyperconnected googling and a rabid misguided fanbase talking about comparisons and connected versions is at best ridiculous. This movie is an ad for all the rest of that crap.

The Netflix movie was made on a budget of $50ish million, spread out over potentially as much as seven years, during which time three more Death Note movies came out in Japan. The people who concepted this garbage got paid. The Japanese Death Note stuff is still happening.

Basically you don’t get to call it ‘cultural appropriation’ when you are actively choosing to export your culture. If that’s the case I’d be ‘culturally appropriating’ American culture any time I listened to the radio, and the idea that multinational export cultures and connected media conglomerates are poor abused marginalised people having their only expression swiped away from them cruelly is incredibly orientalist. Japanese people make media and money and do business. Maybe they’re not communist angels having their ideas stolen from them by an invading superforce.

Basically don’t put Native American headresses being made in China and sold in Connecticut on the same tier as paying an author millions of dollars for their work from a different country.

Death Note (2017): The Netflix Movie – Avenging the Subtitle is an American production based on a Japanese idea. It is a remake that does not seek to erase or destroy the original, that couldn’t if it tried, and that was made with the original creators getting money for their work. It was not plucked from some poor mangaka’s notebook by a passing corporation and gleefully mass-produced, and if you want to die on the hill of ‘it’s stealing’ then I have no time for you or for that conversation.

No, Death Note (2017): The Movie On Netflix – Willem Defoe Mugging for Hours sucks on its own merits.

What It’s Not About

Death Note (2017) The Movie – Endless Couch Gags is a remix; a cultural transplantation of a premise. Just like we remake older stories, just as we re-tell stories from other cultures, we sometimes take an old premise and bring it into a new cultural context and framework and re-tell the story and see what changing the surroundings result in the change. You may recognise this as what every single queer person does with every single other work they look at: what if this was just gay? 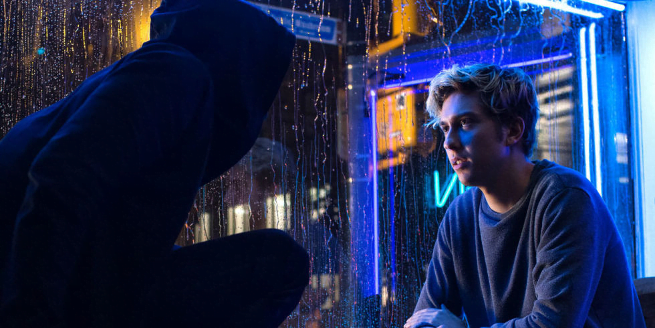 That said let’s look at Death Note as an original work. What is it, in the end, about? What kind of things does Death Note see as important? Without going into a lengthy essay about it, because I don’t care that much, the original series Death Note is about (one particular really obnoxious interpretation of) intelligence, power, and consequence. Specifically, it’s about the idea of an intelligent person given the capacity to wield power, and the consequences that flow from that. The story does definitely, definitely think that Light is smart, by the way, and it does think the story is about whether he’s right to wield power the way he does.

There’s a really sad kind of approach to this, where the story repeatedly hammers on the theme that opposing Power is evil; that Light will be determined as right or wrong not by how he impacts other people, but whether or not he’s caught. At the end, Near catches him, and Light dies; but even then, the story persists with the notion that maybe Light was Right?? Cults to a serial killer persist, and the story keeps on spiralling out with different permutations on this same central question of so about this book. Near may lecture Light about how he’s just a serial killer corrupted by power, but the story of Death Note doesn’t show you that corruption and rejects Near’s position by having cults that worship Kira lasting, with people pleading for Kira to kill them. No matter what Near says, he’s not just a killer: he did, in the incredibly stupid world of Death Note, change the world by his actions.

While the story may want to have a moral underscoring, it really is just about the fantasy of wouldn’t it be great if god existed, and was smart, and murdered people I don’t like? You can consider that a moral framework, but the story doesn’t do enough to convince me the people behind it do.

Still, that’s something of a compelling fantasy for America. America is not a place where power and intellect go together or are seen as logically connected. Oh don’t fucking @ me. American cultural power is the paw with a shawtgun and the plain talking political leader and the Shut Up Egghead, We Know Better and so on and so on and so on. American culture is not a culture about What If God Was Smart. You could do something really interesting if the story was about Light actually being a knucklehead and the sheer lack of information in the world around him about him being core to his power. 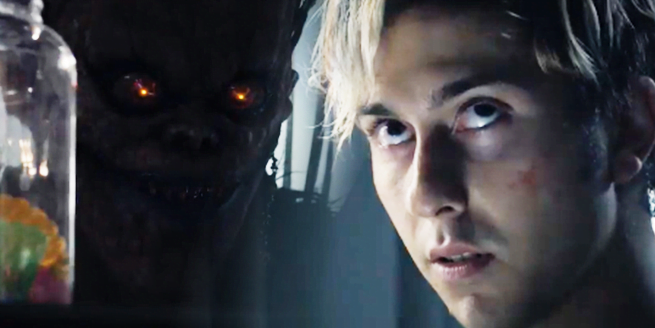 Another thing that Death Note 2017 – Hot Topic Boogaloo isn’t about is about giving a teenager the capacity to kill people en masse as pertains to a culture that already has teenagers killing people en masse. It doesn’t want to talk about school shootings, a thing that actually happens in the US on a nearly weekly basis.

Despite the fact that Light gets his kills from internet surveillance and online databases, it’s not about online security details. It’s not about drone warfare, another good example for remote-viewing based killing in unjustified ways that’s actually happening with the actual power of the actual United States. It’s not a story about how well you trust what you put on the internet, either, or about how convicted of something isn’t the same thing as guilty of something.

It’s not about the dangers and abuses of a justice system ill-equipped to deal with out-of-context problems, either. It’s not about cops abusing their power – the cops in Death Note 2017 – Blue And White Lives Matter are treated as entirely legitimate sources of power and their deaths are seen as a moral boundary too far for Light’s sensitivities.

Death Note 2017 – Not About Daeth Or Power is not about death. It’s not about power.

Death Note 2017 – The Ends Justify The Memes spends ‘time’ ‘establishing’ that Light’s state is reasonable. His dad is morally correct but functionally abusive, his mother died by the hands of unpunished evil. It gives him a backstory, a justification for being hateful and violent and also underscores that he’s so very smart and yet also bullies him into committing his first murder. It basically does a lot to try and excuse Light for being exactly what the story shapes him as being, while still trying to also make it clear he goes into this behaviour totally willingly. It’s very much having your cake and eating it too. 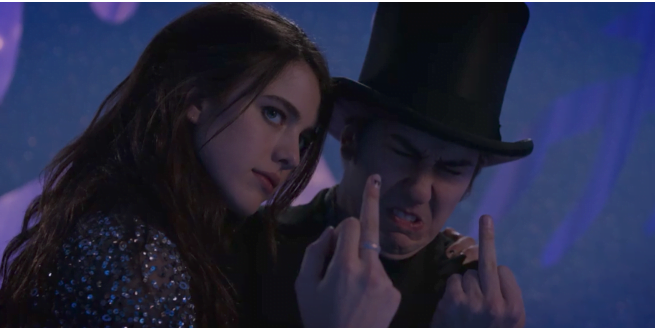 Yet at the same time, while he needs justification and explanation and backstory to explain, Mia doesn’t. Mia is just… there. Mia turns up, wants to ride Light’s jock, complicit and eager to assist and enable him and reassure him that he’s doing the right thing and he should do it more and nobody asks why she’s like that. The closest we get to an explanation is that she tells him he makes her feel alive.

Mia is you, audience.

Mia is the uncritical fan of just how cool Light is. Mia is the person who looks at what Light does and wants to encourage the story to keep going, no matter how stupid it is. Mia justifies the murders, enables the murders, bails Light out and protects him and her failing – her eventual doom – is her trying to supplant Light. 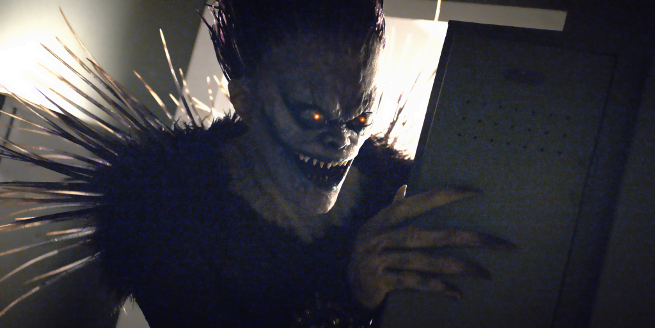 If you enjoyed this movie, great. Glad. I’m super glad you have a thing you like.

But I think this movie thinks you’re an idiot.

Light gives up his identity super fast to Mia and it makes him look like an idiot, the rationale for the name is stupid and contrived, the final plot point that makes the book into a reality-warper that can influence things other than the people it’s killing indicates the entire book could be used far better to improve the world because Light’s an actual fucking wizard now, the story manages to be boring despite being about literal life and death, the world of Death Note 2017 – Tiny Nations With Tiny Problems still sees 400 deaths in criminal networks over months being terrible and enough to lead to total transformations of global crime despite the fact 45 civilians die a day in just Mexico as a result of the Drug War, it does the same bullshit introduce-a-new-rule nonsense the manga does, and in a twist of somehow treating women worse than the manga, we get to see Abused Sex Worker Tity for no fucking good reason.