For anyone not familiar, CanCon is the Canberra Gaming Convention, the largest tabletop gaming convention in Australia, and certainly the largest one conveniently available to us. It’s three days of tabletop gaming, with no entry fee, a huge hall of tables for a whole host of games, and in the convention centre in the middle of a, well, let’s call Canberra a city. It’s air conditioned, infamously, on one of the hottest days of the year, and you can turn up and come play board games at the game library, you can play Magic or Warhammer tournaments, you can shop or play with your gaming group and it’s all great fun stuff.

We’ve been doing CanCon now for… I want to say three or four years and I thought I’d talk a little bit about things that CanCon entails for me. 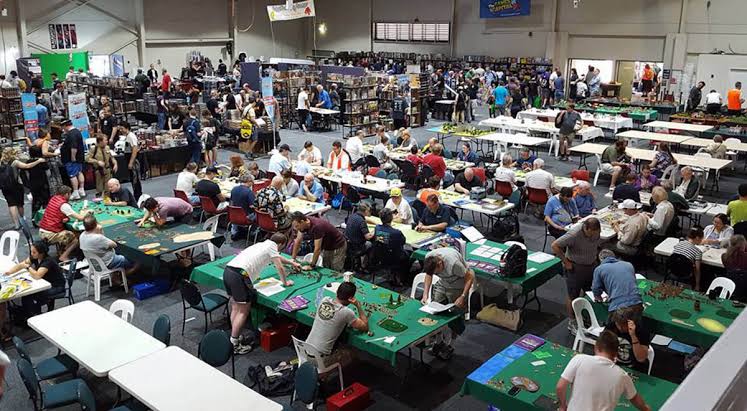 First, CanCon happens two hundred and fifty kilometers from my home so obviously I don’t commute it, especially as someone who doesn’t drive. It’s three days, so, unlike most of our cons, we lodge in Canberra for the days in question. This is nonstandard for me and it means that I have to do a lot of preparation for existing outside my normal work areas. A big part of this means trying to sleep, since I’m a restless sleeper. I don’t just listen to ASMR videos because I like getting weird questions about ‘is that a sex thing?‘ but also because the soothing sounds helps me sleep. And oh lord, sleep is important this weekend. Sleep is so important this weekend, because over three days an hour of sleep debt just gets carried and there’s nowhere for it to go.

We need to take stock with us to Canberra, no mulligans. This means that any stock we don’t have, we don’t have, so if someone comes looking for a particular game, that is it for their chance to see it. But every single gram of weight we take with us has to fit inside the car and that has to fit in the car with us, and it has to last us three days. That’s not nothing, too. That means we plan ahead and we pack up tight and we try to get our stuff right… but there are still problems.

Part of it is timing. CanCon happens early in January. That means if we have new games that want to come to CanCon, we need to order stock of them before CanCon and we need to order stock of them to meet the demand at the biggest con. Which we literally do not know because nothing else compares to it. That means a stocktake and a projection, and because of shipping times, that stocktake needs to happen right before Christmas, which is also scary as heck, because then we’re investing in stock at the time when our personal funds are you know, dealing with Christmas.

Another problem is that sometimes we overstock of a game and understock of another game. Not anything ill-intentioned, just woops, we packed a lot more Crowdfund This than we did of The Botch Is Back, and one of those sells better than the other. What do? Nothing, you just gotta lump it. It’s a weekend. It’s the work.

Right now, the die have been cast. What mistakes were made ahead of time have been made and there’s nothing to be done about them, and that’s okay. Now it’s time to sit at the table and let the day unspool, meeting people and talking about games and seeing what they find fun and interesting.

If you’re in the area, swing by, look around, maybe you’ll get to see me, and be disappointed in real life!