I talk about games a lot.

The origin of the game pile, which I’ve explained a few times lately, was to be a sort of documentation as I worked through a large pile of games I’d gotten in part because of the generosity of a kind friend, and my own rarer purchases. It also focused heavily on my digital game collection at first, and way back when I even had the idea of starting a subseries of game pile, called cheap thrills which was about finding games that had twenty or more hours of reasonable playtime for only $5, and was going to feature a lot of older DOS and Abandonware games that still had their charms.

The original purpose behind Game Pile was, to an extent, a sort of documentation of the process of working my way through my presents. There’s guilt and all sorts of other feelings there, and ambitions for a life writing for some source like Polygon or Waypoint that has since dissolved in a mist since August 2014. Not only has its original purpose changed, though, It has since grown to incorporate board games, and board games are different to my steam library because board games are physical objects.

The physicality of these games means that when I’m done with a game there’s something I can do with them – it means that I can package that game up, and, assuming I haven’t broken it, I can let it go. I am not bound to the game, nor is it bound to me. A steam game is a little string of numbers next to my name in a directory that I access with a password that let me put a copy of a program on a computer. From the people who made it’s perspective, there’s no reasonable value to letting me treat that code like a physical object, but with a tabletop game… they can’t stop me. That’s kind of the default of how most products worked, up until we got used to this other normal.

Today, I am at CanCon, and CanCon has the CanCon Bring&Buy. It’s a regular event at Australian conventions, where people just bring stuff they own and sell it. It’s great. I love the Bring&Buy, and this year, I’m bringing some of my games that for one reason or another are leaving the collection.

Here then, presented in no meaningful order, some games of mine I’m letting go of, and reasons why:

This is a game that I was gifted, which I was very excited to play, and when I finally got it, and got it together, I found that I was surrounded by precisely zero people with any interest with playing it with me. One friend really wanted to play it with me, and then her life exploded. This game has sat in my house, unused, unappreciated and untouched for now five years, and that’s a dead shame. I want this core set to go to someone who can use it, and who will have people who can play it with them, which I don’t. No mark against the game, but this is one of those ones that wants you to be able to engage with its community and I can’t.

This is extremely a bummer because right now, the community is doing something super revolutionary that also makes community involvement even more important, and it’s just not the time to try and recapture seven years or so of history. 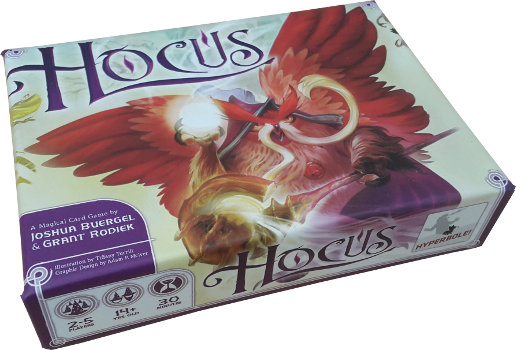 When I heard the creator of these games was selling off the last of their units for $10 each, and that they’d probably never make more copies, I had no idea what they were, but asked if they’d be willing to send copies to Australia, or how much more I’d have to pay for that. I was informed, nah, no thanks, he’d rather not bother, and that was a bit of a bummer, because the games looked interesting. A friend then bought them, and mailed them on, which was wonderful, and meant I got to spend a few years looking at and enjoying owning these beautiful games, and examining critically all the design elements that make them up.

Problem: I have never played either of them.

Hocus is a Poker Variant, and while I love one of its main ideas – you contribute cards from your hand to the value of each hand, competing with what you have in your hand with what everyone else is able to for the main hand. That’s neat!

On the other hand it kinda requires you to be dealing with people for whom poker not only holds charm, but poker would be better if it was a game for wizards. It’s a beautiful game, a breathtaking game, I’m glad I had it and I’m glad I could analyse it, but I have other games about being a fancy wizard that deliver on that vibe better.

Farmageddon is a kind of game I don’t need either. It’s small box, so it’s portable, but it’s not as universally applicable as other games in that ilk for me. I’m not likely to have four people randomly want a game for a fairly solid chunk of time, so… this needs to find someone else who wants a game about funny corn. Really, the kind of game this needs to be to be in my life is more something like Button Shy’s microgames that can live in a bag and come out when we’re waiting for coffee. 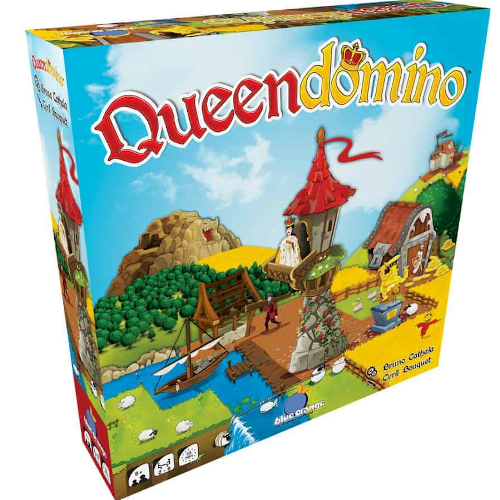 Now this is a contentious one! Queendomino is a game that was a gift! Isn’t it a sin to regift a gift? Well setting aside that my grandmother is dead and that puritanical attitude is root to prosperity doctrine, my wanting to get rid of my copy of Queendomino is not a mark against the game. It’s a bigger, fancier version of Kingdomino, and I was purchased for me by my sister, for whom I had bought Kingdomino with the idea that she had access to the more basic game with my mum and the two together could share a great old time and only worry about the more complex rules when I was around for them.

Kingdomino is so good I kind of don’t think it needs anything else.

With that in mind, I want this copy of Queendomino to go to someone who plays Kingdomino, and can’t quite feel it work for them, because they need it to be more. Then I’ll use that money to go get a copy of Kingdomino, which is great, and that will be the gift my sister got me, which is great.