Die Rich is a card game I developed… I want to say early 2020, late 2019. The idea comes from a long time ago, and it’s built around a design I used for referencing a thing in a RP space, of the Carthaginian General Hannibal.

The thing is, something happeend in 2020 (like, all of 2020), and that meant I never developed the rulebook for it. I’d played the game, before I ever made any of the cards, and I’d tested it, I knew the game worked… but I never wrote down the rules.

Now I don’t know if I remember them, exactly.

But I do have a deck of the cards, so I can play the game, and see the problems, and reconstruct what I generally know. Then I’m going to construct what I need the rules to cover, and you can read that. This is how these rulebooks kinda got made. 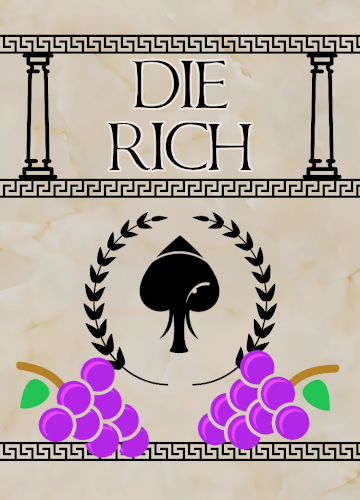 First, you set the game up. This game uses slugs: Stacks of cards that have a trait. I need the Scoring cards to show up roughly equally spaced between one another, so we make a set of slugs to make the deck. Now, there’s a mathematical way to do this, where subtract starting hands, divide the remaining cards into four stacks, shuffle the scoring cards into each of them, then stack them up, with the Hannibal at the bottom. That’s the math of it, but phrasing it needs to be done in an approachable way:

Okay, that gives our direction for the setup. That’s good, I like that.

Next up, we need to describe the play pattern of each turn. Each player is going to pick a card from their hand to play into a tableau in front of them, and when the scoring cards come up, those cards are then ‘scored.’ That’s what the laurels are for on each card – that’s how many points that card is worth.

Every time a scoring card comes up, you score all your cards. Each type of card in your tableau is ‘won’ in different ways. It’s possible for a category to have nothing but losers, mind you!

How then do these cards differentiate themselves in play? Property, Politics and Markets all have a I-VI bar on them. For each type of card, this bar means something different.

The cards have text on them to remind you of some of this – but there are details, like the Politics cards don’t explicate what ‘most supporters‘ mean. That means that needs a clear example, probably with a diagram.

Markets can have ties, and Bacchanals can’t, though. If you and I both put down a market value III and you do too… that’s fine. We can coexist. We’ll even score them, at the end of the round, unless some other player undercuts both of us.

As for politics? It’s possible for nobody to win. If one player takes the I and the other takes the VI, those two players have equal area control (I gets II and III, VI gets IV and V), and then when the time comes to grade politics? Neither of them succeeds.

Okay, that’s the rules for scoring, but we haven’t cleared up how you add cards to your tableau. That means we need to talk about the actual steps of play. You set the cards up, you understand how to value them, and now.. What. 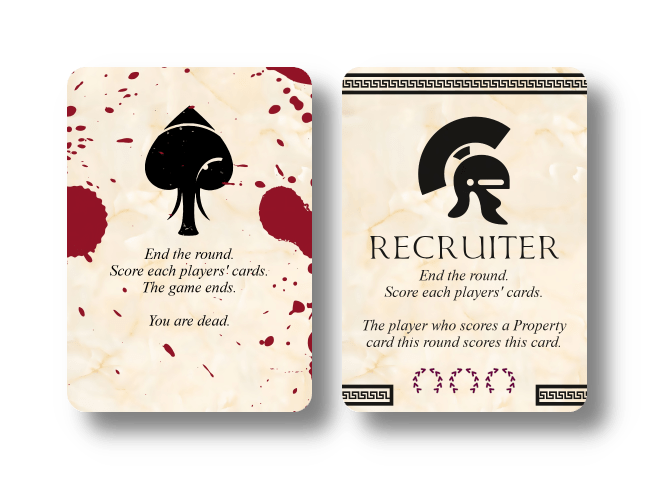 Okay that’s our player loop. But we’ve looked at the drawing of cards, and that’s a problem, because that deck has those Scoring cards in it. Those scoring cards have on the back of them a symbol so when they show up, people get to know that scoring is about to happen. Then…

Alright, hang on, in a four player game, there’s very much possible a chance that if all the players throw out their hands, you could see sixteen draws and that’ll get multiple scoring cards revealed, so we need to make a note for that.

Then there needs to be a rule about how to handle scoring.

The final scoring card, the Hannibal card ends the game. That doesn’t get anyone any bonus points.

Alright, so that’s… our basic outline? That’s all the rules required for the game. Now the next struggle is to get these into a rulebook.