Games are filled with opportunity for discovery. When you’re exploring a device with low stakes, you are in that time, playing with it – seeing the boundaries of what it allows. It is the play of a gear, more than the play of an actor. Play is how we find the limits of things.

Okay, rewind. A story. A story of a specific thing in a specific place.

Back in the day, in City of Heroes, when you first made a character, you’d complete a short little tutorial, and be dropped in front of the steps of the Atlas Statue in Atlas Park. It looked like this.

It’s a common thing for players to talk about, the first moment the got a flight-related travel power.  It was usually hover, but sometimes it was a jetpack. However you did it, when new players gained the ability to leave the ground, one of the most common things they’d do is use that power to fly up to the top of the Atlas Statue and look at what was there.

What was up there was an exploration badge. 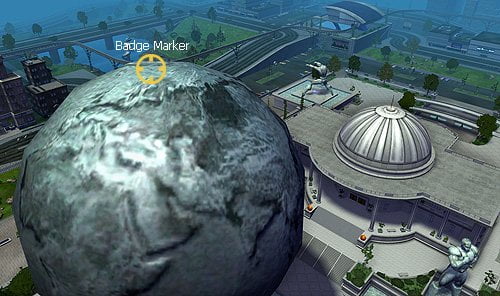 These badges were a bit like achievements. You could put a badge on your character and it’d display under your name. More important than what this badge could do, though, is what this badge did.

When you explore, one of the most disappointing things to find is nothing. I have memories of struggling up mountains in World of Warcraft and New Vegas and finding blank textures and no reaction to my presence, a sign that I hadn’t actually achieved something difficult but just had done something the developers had never expected. That taught me to stop trying those things, to stick to the path, to give up on exploration and excitement. I turned the gear all the way in one direction, and the game didn’t react well to it, suggesting I never do that again.

In City of Heroes, you tried something, and the game found you when you got there, and said hey, yeah. This kind of thing works.

The Top Dog badge encouraged players from the earliest point to always look on top of things, around things, to think in terms of what counts as worth exploring. It was a good idea, and I think that it rewarded players for being playful with the world.