It’s a weird thing, considering. Maybe it’s a childhood story of Babe. Maybe it’s after being raised in a weirdo Christian cult, I thought the ‘unclean’ label they got was a bit rough. Maybe it’s Asterix comics that made it look like the poor boars were on the losing side of things.

CW ahead for descriptions of war and some unpleasant ways we refer to history. 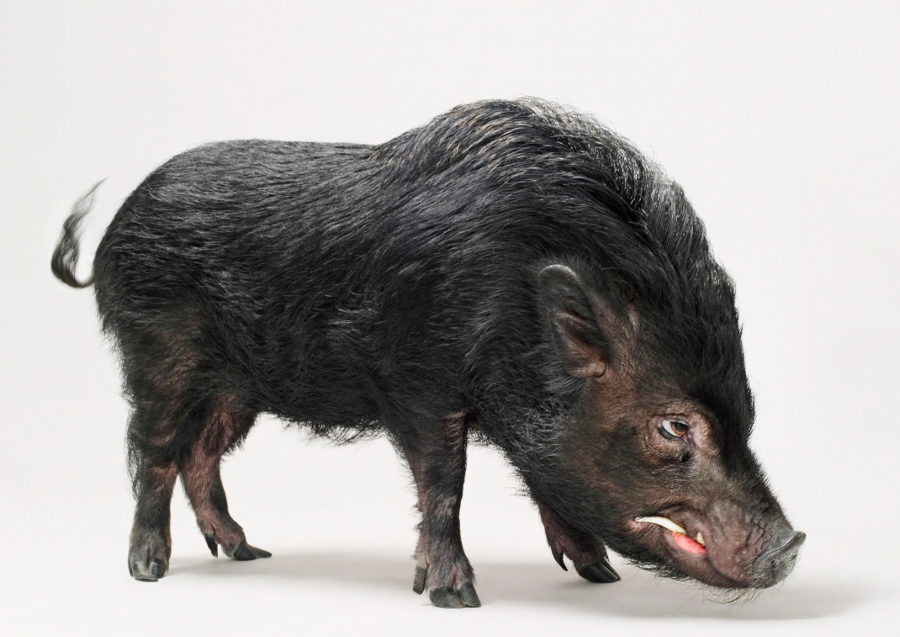 This is a boar.

Boars are a kind of wild pig from Europe. They’re the origin point for a lot of our modern pigs. Nature is one of those wonderful experiences where there’s a lot of language that’s hiding a lot of truth, so when I say Boars are ‘like pigs’ you have to understand that’s like saying housecats are ‘like lions.’ The boar is a territorial forest-dwelling omnivore, and see, right there, there’s another one of those words – territorial. Territorial is a word nature takes very seriously – most of the most dangerous things in the world are not dangerous because they’re predatory or they’re venomous, they’re dangerous because they’re territorial. That means they’ll fight anything, and they’ll fight it even if it’s a bad idea or it’s risky. You can win a lot of fights, in nature, by starting fights that other people aren’t ready or interested in.

This is a boar spear.

Boars were so ferocious and territorial, and they had just enough bulk that they famously don’t notice when they’re dead. Normally fatally wounded animals will try to escape, even as they bleed out, because, well, what else is there to do, but not boars. Boars were known in history for killing the people who hunted them with spears, by charging into the spear, which would punch through the boar, fatally injuring them, but then the boar would keep going, and pin the spear-wielder to something and smash them to death with tusks and hooves, and then die anyway. The cross-piece on this boar spear is designed to make it harder for the boar to do this, stopping them short as they plow onwards, and make that momentum into more trauma for the boar.

This didn’t usually work, by the way. When boar momentum was stopped like that, the force of their body would snap the spear and they’d just keep going. 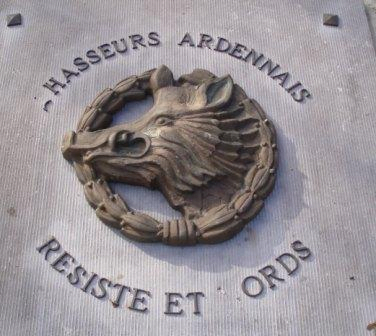 This is the emblem of the Chasseurs Ardennais, an order of Belgium soldiers set aside to the task of defending the Ardennes Forest boundary between Germany and Belgium. They were established in the wake of World War 1, and they use the boar as the symbol of their military unit.

World War 1 was not kind to Belgium. It’s kind of hard to convey the mindset at the time, because that whole war was a complicated cluster of god no what now, but the most basic thing you need to know about it is that Germany kind of didn’t exist for long before World War 1. Belgium was a country minding its own business next to a handful of countries, then suddenly a bunch of those countries became one country, and it was probably the richest, most powerful ground force in Europe. Almost overnight.

The Chasseurs Ardennais were taken pretty seriously in the wake of World War I as a symbol, because Germany and Beglium had a pretty hecked up exchange there. It was known in other parts of anti-German Europe as ‘the Rape of Belgium,’ the idea that a military conquest of a smaller nation was so overwhelming and brutal that Belgium was doomed and everyone in Europe should be shocked by it. 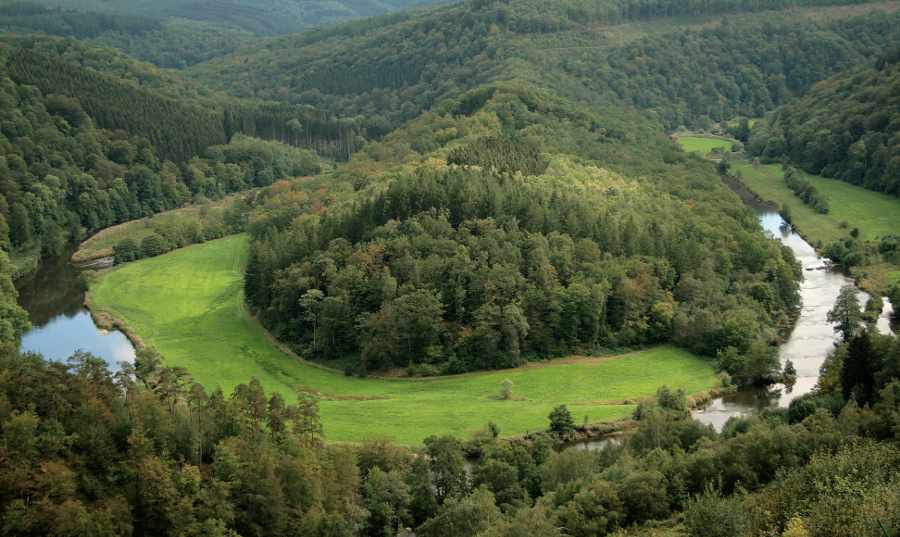 This is the Ardennes forest. The Chasseurs Ardennais were important symbolically when they were established, because they were a signal to the Belgium people that they would protect and defend Belgium against the terrible German state, which was, post World War I, pretty badly messed up. Which meant they were very symbolic, but also didn’t have to do much – which meant over time, the government very slowly filtered troops and money and resources away from the Chasseurs.

World War 2 was a pretty big deal, you probably know about it already. Once Germany got started, Belgium was one of their speedbumps. It was a tiny country, had barely any of the same military power, and it was reachable by land in a very short amount of time. Germany wanted resources, and space, and Belgium was kind of a freebie, and it was on the way to France.

The war was known as the Battle of Belgium, or more sadly, the 18 Days Campaign, which gives you an idea of how hard it was for Germany to take over a whole country. This push was led by the Ghost Division, the 7th division of the Wehrmacht, commanded by Erwin Flipping Rommel. If you don’t know who Rommel is, he was a big deal, very good at tanks. Tanks were the Rommel Thing. Rommel’s strategies were a big part of ending the cavalry age – he treated tanks as their own thing.

At this stage, the Chasseurs Ardennais, which had multiple regiments, had only forty soldiers stationed to defend the whole German-Belgium border. The other regiments were busy with other stuff like, you know, the defending of the capital and whatnot. These forty soldiers had rifles, a few machine guns, and bicycles.

Work this out then from the perspective of the woefully outnumbered Chasseurs. There are forty of them, designed to defend a border way outsizing them, and they were made to prevent the kind of brutal roll-over-and-die crushing that the last German invasion into Belgium had brought. There are tanks coming, and at the head of that tank division is the inventor of modern tank warfare. Orders came from Brussels, telling them to hold the border, and then no more orders came. The Chasseurs Ardennais are at this point, facing down what amounts to the goddamn boogeyman.

They weren’t going to win. They couldn’t. There were forty of them and they were facing down an army that was sized to take out their whole country. Hell, command didn’t think they could win, or even should: They sent orders to the remaining soldiers telling them to fall back and escape, which never arrived.

The Chasseurs were captured, and forced to surrender, which was reasonable. But not before this force of forty people with bikes took out five tanks and held the line long enough that the German force had to divert effort to capture them. The forty at in the forest were captured – captured – and when they were caught, the Germans were so befuddled they wanted to know where the other soldiers were.

The German estimates of the force, based not on projections but on fighting them, were that there were hundreds of soldiers in the Ardennes forest. 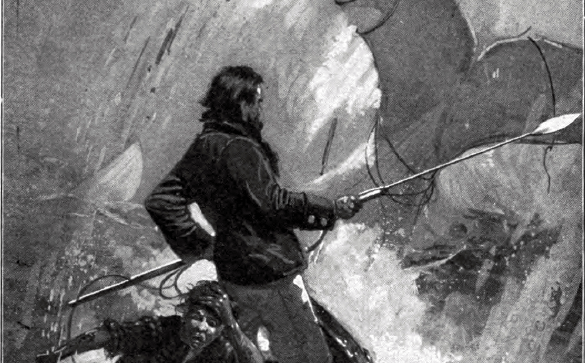 This is an illustration from Moby Dick.

These past years I have been wondering, quite a bit, about the old saw about love triumphing over hate, a notion I’ve rejected in its simplest incarnation in the past. I’m familiar with hate, I know the flavour of hatred. Love can triumph over hate, in my opinion, if the love is focused on protecting the victims of hate, rather than on ignoring the harm of the hateful. I think there are lots of things worth hating. Nazis, for example.

And time to time, I think about the kind of things you can do in service of fighting against things you truly hate.