It’s really weird for me to look back and see it like this, but Onslaught is the end of history, in Magic: The Gathering. The new card face had to happen at some point, it wound up working out, and all that, but nowadays, it means that there’s this short, sharp dividing line between Onslaught and Mirrodin that marks one side of the line as ‘the broken times’ and the other side as ‘acceptable for an approachable eternal format.’

It’s not hard to summarise what Onslaught was meant to do. It wanted to establish the morph mechanic and the idea of returning mechanics, it wanted to be a creature-combat focused set that used tribal mechanics, which were already popular with players. It sought to bring something players already liked (tribal) into a space with something new and possibly worrying (morph).

I’ve said in the past that creatures used to suck and it’s not entirely true. It’s more that the 1% best creatures of the history of Magic tend to either be outright broken (Psychatog) or about as powerful as creatures now. The bulk of the rest of creatures, however, tended to be really bad. Token creatures, for example, were seen as a complex rules mesh, something you couldn’t really use very often.

There was also the way that you’d be left with interactions in the set that left me wondering just why. 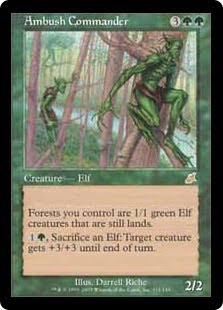 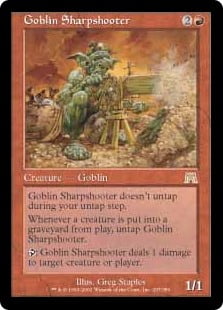 In case you were curious, yes, this is a two-card interaction where a very commonly played, good rare card from an earlier expansion kills all your lands when you play the Ambush Commander.

One of the best Dragons in this period of magic was a 6 mana 6/5 with flying and haste and that’s it. One of the other best Dragons was a 7 mana 5/5 that was mainly used to cycle lands out of your library and almost never played. And these are the golden headliner cards! One of the best green creatures was a 4/4 for 4 that gained you 4 life when it died – and that was all!

Oh, and Astral Slide and Lightning Rift were in this format. So to was Akroma’s Vengeance, a mega-wrath with cycling, and Wrath of God, a wrath which was wrath. There was also Kirtar’s Vengeance, if you needed to run twelve wrath effects. If you were in black, there was Mutilate and Infest. Red had Pyroclasm, which would wipe out all the 2-toughness-or-less cards. Simply put, if you wanted to mop the creatures off the board, you were covered, and control decks had ways to force you to over-extend, too.

Wizards of the Coast created an environment that was meant to be about creature combat and the interaction of creatures, where there were numerous tools to clear the board. This meant that in order to be good you either were clearing the board or winning before board sweepers. There wasn’t a deck that fast in black, or white, or green, or god help you, blue. Green had all these dorky little elves that needed to live to tap to work (and got wrathed) and no reach after the wrath. Black had Nantuko Shade and Cabal Coffers, it was on the side of the mass-murdering. White soldiers? God bless them, they were set up for the world of creature fights, not realising they were outclassed.

No, you needed speed. 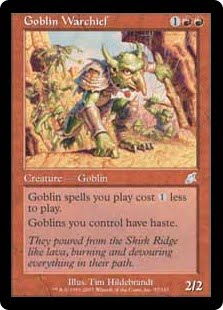 Goblin Warchief was part of a cycle, which was composed of Goblin Warchief and four cards that sucked too much to matter in standard, because they didn’t get you turn three kills. Goblin Warchief is a god-damn monster, a creature that blew out the doors when Scourge arrived.

There really was no fix for Goblins. You built a control deck to kill it, or you got killed by it, or you played it.

The creature-based standard of simple mechanics and tribal attacking and blocking led to the generation of which Mike Flores once said ‘who blocks?’

Then Mirrodin came out, and it all got worse.