You know what, I don’t say this kind of stuff very often, so here.

Ripperology is some of the worst kind of awful nerd garbage that exists.

Ripperology, or the ‘study’ of the murders of ‘Jack the Ripper,’ a dude who is about as historically verifiable as Jesus Christ, is the modern day pursuit of some kind of useful lasting information present in our modern day and available in any meaningful way about how in a city of three million people, one particular murderer was able to avoid capture from police. This is all done by breathlessly poring over various historical sources, which are of varying importance and impact, but also, crucially, reading a lot of people writing about those same sources, and building their own cases.

It also, when it crosses my path, seems to heavily relate to yelling at women on twitter, which I’m sure is just coincidence. 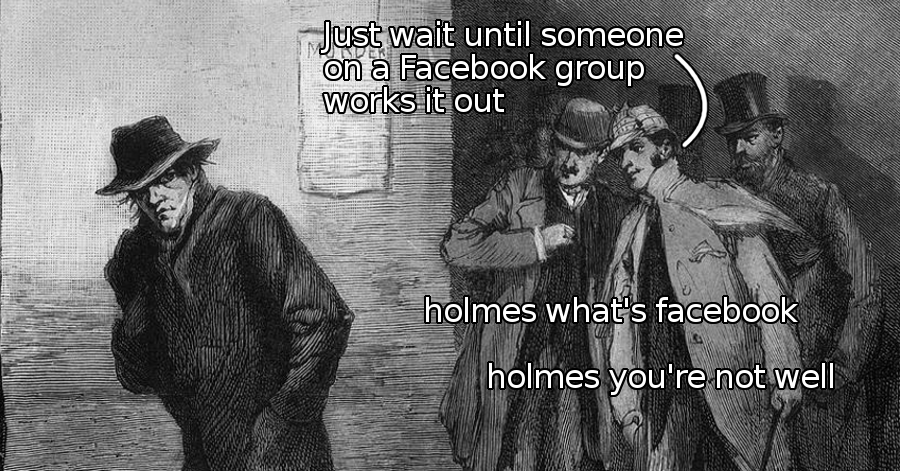 This isn’t me saying that ripperologists can’t have their fun, I mean, if they were dressing up as an elf or a Touhou I’d be defending them, but Ripperology exists in this weird space of somehow treating itself with a kind of seriousness and importance as if it’s a kind of forensic science. It’s the kind of people who will breathlessly butt heads about the possible meaning of journals whose authors admit they falsified them, delving deep into complex and elaborate webs of ‘scholarship’ about a subject with precious little actual information to it, but also in order to try and make it somehow hard to explain something that has a really simple explanation.

You don’t need some master of intrigue to get away with five crimes against marginalised people in a city of millions in a part of town already renowned for its criminal behaviour. You don’t need him to be an outcast prince or a secret surgeon or a dude with an exotic foreign-acquired brain disease or a vampire.

Do I have any special disdain for Ripperologists, too? Not really. I bet I know someone who has a pet theory about it, and as far as pet theories and conspiracies go, it’s pretty harmless to have one. It’s probably as goofy as Velikovsky believing that Jupiter farted out Venus at some point. It’s just this particular one, the idea of being captivated by this one.

It’s, like Pineapple on a Pizza, a game, essentially. People are playing their theories against one another, back-and-forth and joust and juke. It’s just, as someone who cares about games, a seemingly really awful one, a game is basically the most morbid and tedious kind of storytelling game, a sort of Dungeons and Dragons campaign where there’s no dungeon master nor rulebook but everyone is still going to be as obnoxious a rules lawyer as possible.

Edit: Hi there, Ripper forum hate-readers! Just so you know, you live down to my every expectations!