Recently I glibly stated on twitter that it’s interesting how DC Comics’ enviromentally-minded supervillain Poison Ivy has largely remained unchanged over time and yet in the process has become less and less of a villain. This is interesting in the same way that the Planeteers have remained exactly as embarrassing as they were but somehow the idea of getting kids to care about the environment seems a lot more worthwhile than my cynical parents regarded it.

This tweet went wide and with it came a lot of ‘well actuallying,’ and just a reminder that twitter is bad, but along with it came some interesting notes that I figure it was worth packaging up because who better to talk about in smooch month than a villain who has a powerful, dangerous smooch? 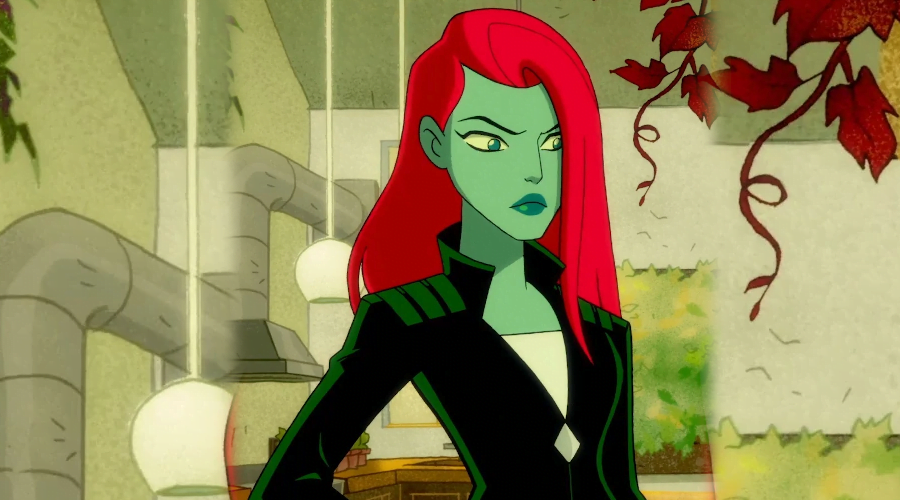 First of all the character’s history is complicated. When it comes to comic book characters, especially those who’ve existed for over fifty years, it’s all very much a moving target. We’ve seen at least a dozen versions of the same character, reboots and resets, transitions from author to author and through the shifting of our culture. When Poison Ivy was created, the Civil Rights Act was one year old. When the version most people are familiar with from Batman: The Animated Series debuted, America had just finished the first war in Iraq.

The actual histories of the character kind of don’t matter, but just in case you weren’t aware, she got kicked off not as an environmental crusader but just as an untouchable woman who could kill people with a kiss, which means you got some of that 1960s ‘this woman wants to kiss on the first date oh no, oh no, it’s all gone wrong‘ kind of moralising that boomers love. This is a really common thing you’ll find from the period, especially when it’s poured into the vessel of a hot woman. Feminism during this period had this effect on a lot of just-coincidentally-dudes where they were on the one hand intrigued by the possibility of widely available premarital sex, but equally worried by the possibility of women having that power in a nonspecific way. You can see lots of women characters from this era that blend together ‘beguiling hotness’ with ‘what if counterpatriarchal liberation, but too much,’ and Ivy got her kickoff there.

Basically, Poison Ivy started out as ‘the hot feminist who will fuck you once, but then you learn a moral lesson and defeat her,’ which let me tell you, as someone who read a lot of Christian Replacement Media growing up, that’s a really common story structure. 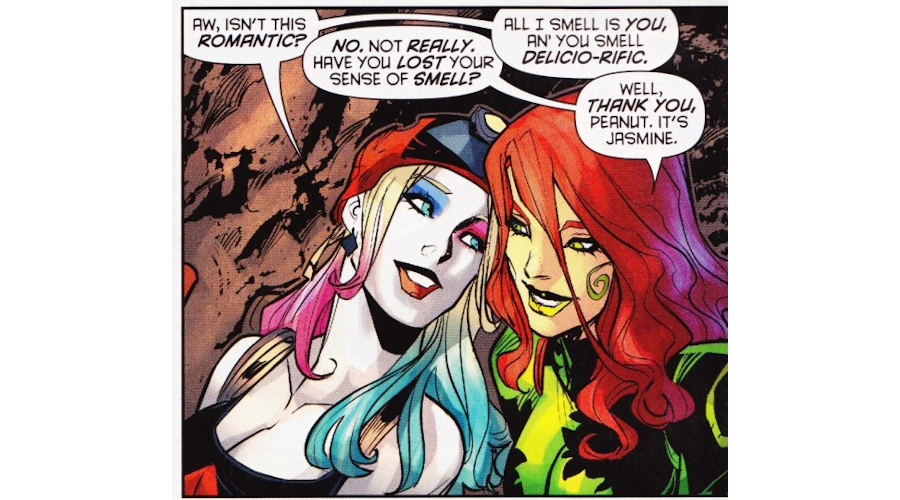 The narrative around Ivy shifted recently – and by recently I mean the past ten years but again, this character started out in the 1960s, and it’s mostly due to the vision of her as the perpetual girlfriend of Batman: The Animated Series canon export, Harley Quinn.

I’m not actually that wild about this ship because it has always felt to me like ‘the girls who were there’ – that people disliked the Joker/Harley element of the narrative (and well they should), and Poison Ivy was in the same space, and that was enough to get people trying them out, in the same classic way of mushing dollies together. Someone with more skill in fandom studies and archive diving might be able to find a root for it, but I do genuinely suspect this was fanfiction well before it was ever conceived of in the narrative itself, especially because it does require Harley to change as a person from one of her one-and-a-half character traits of ‘is obsessed with the Joker.’

On the other hand, when you take away Harley’s single note, and you’re left with the strangely powerful urge of clownfuckery that the late 90s seemed to have (why else do you think Nights Into Dreams was popular), you have to actually do something with your Girl Hot meets Girl Hot becomes Girls, Hot, and in the process, it’s pretty easy to find that there’s a lot of there there. It’s a character space where, thanks to years of protracted nobody-cares-or-thinks-about-this just reacting to what’s already there provides you with all the narrative fuel you need to find something interesting for characters to care about or be about. 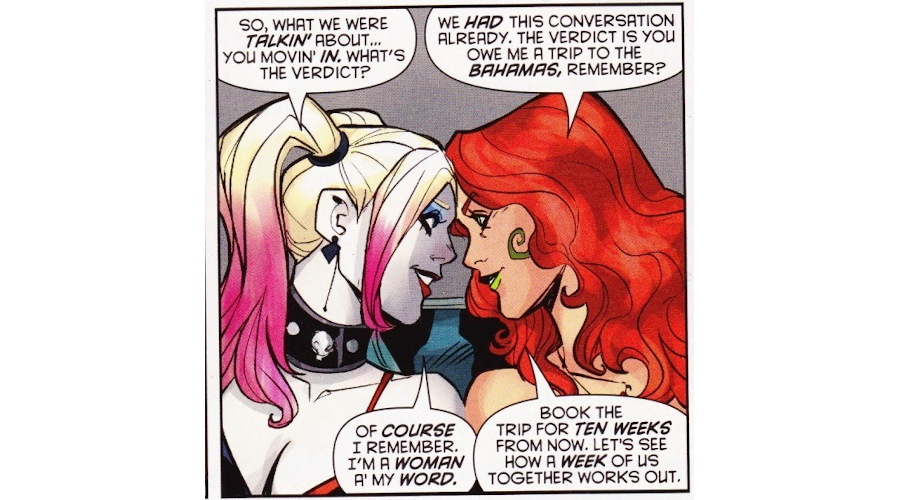 For Ivy and Harley, that involves taking the existing personality traits they had – an environmentalist whose very name is a warning not to touch her despite how visually appealing she is, and a trained, qualified psychologist who proved the Joker was right – and try to make something out of it in the same space, so the hot girls can kisssss.

The upshot kinda rules, mind you, because the nothing that they were was really easy to fill up. Which means that Poison Ivy, who got her start as a spooky feminist archetype is now a wholesome (criminal?) lesbian (despite all the dudes she sleeps with, because fandoms love to pretend bisexuality is fake because they sure don’t mean lesbian that way) with a hot clown girlfriend and that hot clown girlfriend is a pretty big deal in general so there’s now a big ticking clock on the wall for when someone greenlights a movie where they get to kissssssss.

This has meant that the toxicity of Poison Ivy and the way she’s handled (and boy howdy there are some awful stories about Poison Ivy as a sexual predator, written by dudes who clearly think a lot about a beautiful woman with vines ‘forcing’ them to do the naughty bad wrong fun things with her), has been generally seen as a diversion of the ‘true’ character away from her current purpose, Being Hot Next To Harley Quinn. 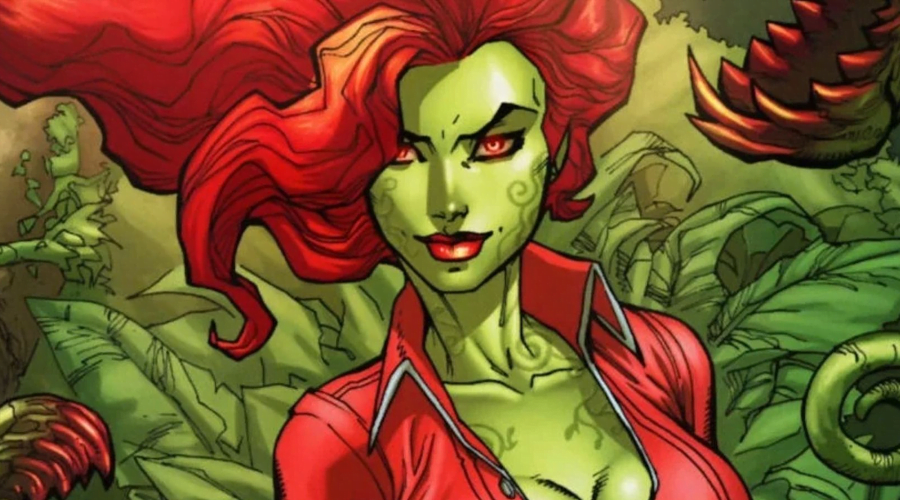 That’s not all, though, because it’s not just that Poison Ivy is now a Lesbian Icon, she’s also an environmentalist who’s been convinced since the 1990s that humans are doing stuff to wreck the environment in the name of personal profit and greed, and they need to be stopped doing that. Methodologically this often has involved plans like omnicide but just as often she’s depicted as striking at corporate powers and polluters – which good, noble Batman protects, because he’s a cop.

As the world we’re in spins closer and closer to environmental shutdown because of uh… a small number of humans wrecking the environment in the name of personal profit and greed that need to be stopped… it’s a lot harder to say ‘Well, Poison Ivy is really bad.’ At best you can go ‘well, I don’t approve of her methods of finding wealthy billionaires profiting off the destruction of the planet and killing them,’