Okay, now with all that scheduling weirdness hopefully past us, what the heck happened with that weekend game? Well, logitistically, we turned up at a rented room, and we spent three days playing D&D. It was heaps of fun, and the thing is, three solid days of D&D gives you a certain kinetics.

Like, nobody’s here to play a game that has a long, protracted travel sequence, or time to plan what might happen three or four sessions later. Instead, the tone is more like an action movie, where you have to keep moving, where rests are short and overnight breaks are rare. The characters are more short-and-sweet movie arc, rather than slow boiling development.

In this game as the setup, the players start huddling in a church on the night of The Hunt, where the streets are full of fog and , with refugees, picked out by the Initiate, Mordechai. Mordechai was looking for people who could be asked to help with the problem they were facing – the clocktower in this section of the city was not lit. If the clocktower’s not lit, the hunters use that as a sign that the section of town has fallen, and instead of entering and clearing out monsters, they’d leave the segment of city and wall it off. The leader of the Cathedral, father Quisling, meeting with Hunter Fawkes, saw the problem, and knew it needed fixing – after all, they were sure the tower hadn’t fallen, the Hunt had just begun.

They needed someone to go to the tower and light it, to fix whatever problem was at hand.

Selecting the player characters, the Father brought them to an emergency system in the Cathedral that let them restore people who had a violent end; the machine was tuned to our players. This is because I wanted to ensure I could have a degree of mortality in the game, and I wouldn’t be held up if a player character died in the fairly high impact combat I had set up. It’s you know, a save space. Someone dies, they come back there, and that meant that players could recover from losses. Okay, easy. Players tuned to this, they were then kicked out into the city to go to the Clocktower to light the important light.

There were fights on the way to the clocktower; then, when they got there, they found flaming skeletons inside. What ensued then was a ‘boss’ fight of sorts, where the players found a contained artifact that had been kept at the Clocktower had a lightning-wrapped snake ghost monster, from the Swamp Pagans out by the edge of town. They then had to beat their way through an enormous, snake-wrapped monsterbeast inspired by the aesthetic of the Shadows of Yarnham if it had a lightning jar jammed into its chest.

Then, thanks to the mechanisms of the clocktower, when the snake ghost pile died, it also shorted out some machinery, and the clocktower went into a ‘shutdown’ – which meant the floors of the building fell away, plunging the party into darkness.

They woke up in the church, alive, and able to explain to Father Quisling and Fawkes what happened. The priest, concerned about the damaged machinery, gave them directions to a warehouse where they could hypothetically repair the light, and they went off, this time in a different direction. The player characters fought some baddies, including more blood-tained vigilante gangs that were ‘helping’ the Hunters, and eventually wound up fighting a feywild crocodile assisted by from snake cultists while riding on a high-speed underground rail system they had no idea the city had. 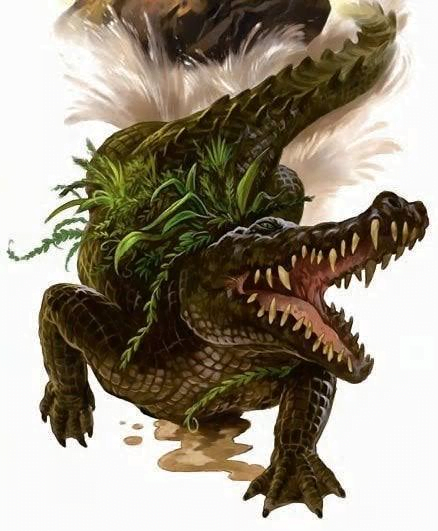 With the replacement light on the train, they then had to dick with the machinery, get it in place, and then get it working -which, when they did, drew the attention of a type of monster the Hunts normally dealt with – an immense dragon moth that blew in one of the windows and attacked them. What ensued was a ferocious fight across three levels, where the moth could fly up and down and attack them, while they used forced movements and controls to try and keep the moth in place while they laid into it with damage. Eventually at one point, the party Warlord fell to her back, pulling the moth down atop her, leading to three of her allies diving upon it from above, charging into it with all their might.

Then, as they lay on the floor, exhausted, surviving, glad at having managed to deal with the problem, gas poured in, pinning them down, rendering them helpless. The door opened, and in walked Fawkes and Quisling, bringing out their weapons, preparing to execute them because now they knew too much about what the church had built in the city.

And then, at the last minute, the old Hunter and Priest were attacked.

That’s right, their earlier versions hadn’t died when the tower collapsed! They’d been really badly hurt, but they hadn’t died, and Father Quisling had merely assumed them dead when his scrying saw them fall. So, he resuscitated them, but instead, just made new copies with most of the memories fro mthat point he’d started the copy. The originals had been off doing their own adventures, and now, the players had allies, rescuing them, as they escaped the city, off into the swamp, to start the next chapter of the story.

The only regret I have about this whole narrative is that I didn’t have the time and prep to make it so the last fight came with a big brawl where the players got to control doubles of their characters fighting the Hunters and their machinations in an attempt to escape.