This week featured me struggling to explain to someone who had, as far as I know, literally no understanding of comic books, who Mystique was, and what made her interesting. The original question had been about shapeshifters – and shapeshifters are all over the place in media I enjoy. Mystique, however, Mystique strays into special territory. She’s a comic book character; she’s someone I like, and for whom I hold a totem. 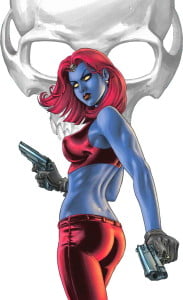 While her origin is slightly different, broadly speaking, Mystique is the foster mother of the heroine Rogue, and usually shown as amoral, or at least, self-interested. In most depictions – particularly my favourite X-Men Evolution showings, – she’s beholden to greater powers, often ones she resents. Even with that pressure, though, she is still parental – often changing her plans in order to protect or benefit her surrogate daughter, even though they’re both on opposite sides of the conflict. Often she attempts to convince or manipulate, and she’s never shown as any kind of grand schemer, herself. Mystique doesn’t want to rule the world. She just wants a world where she can be safe, and maybe with some vengeance on those people who would oppose her. As a shapeshifter, she is one of the kind of mutants who can happily pass as normal for her whole life – but she isn’t content with that.

In the totem I hold of Mystique, Mystique is mostly a selfish, pragmatic woman; not an idealist, with only a few important principles. Her freedom is important to her, her ability to control her identity and her destiny, but there is still some part of her that yearns to improve the world, within that pragmatic worldview. Mystique cares about the world she’s leaving behind, even if only in the way it influences others without her advantages.

Now, what I’m relaying here is borderline myth, and I can’t find hard evidence that it ever happened. It’s just a story that’s circulated so much and I believe, because comics were trying some weird things, and if you don’t think of trans issues, then it’s just a surprise, off-the-wall surprise that comic book storytelling allows you to play with. It seems the sort of idea a storyteller would come up with without realising just what it could mean in the real world. See, Mystique’s story often has this theme of parental neglect, or of some sort of trauam or heartbreak surrounding her relationship with Rogue. It’s a revealed point of canon that Mystique is also the biological parent of the mutant Nightcrawler – making him and Rogue sort-of-siblings. The lost child angle is interesting, especially when you see how Nightcrawler, who is blue and fuzzy, was bullied and resented for being so different from the norm. Thing is…

… in some drafts of the story, Mystique isn’t his mother.

She’s a shapeshifter. Why should she be constrained to a particular biological reproduction method? I don’t think this story has ever been confirmed, but it’s a popular one that writers seem to like hinting at, or alluding, that Mystique changed her gender, in order to conceive Nightcrawler. There have been numerous hints – and nowadays, outright statements – about Mystique’s bisexuality, and the idea that she maintained a long-term relationship with a woman isn’t uncommon.

A rebel, a mother, a warrior, an opportunist, and a woman who makes the best of what she can, in a world she hates and that she knows hates her.