Back in the day of Time Spiral-through-Shadowmoor standard, there was a deck I played in the casual room, and almost kinda thought about writing an article about, but I stopped writing for StarCityGames due to work concerns, and it never wound up happening. I think? Probably not. Ben Bleiwess would know better and I doubt he cares any way.

Here, lemme show you the three weird things that go on in this deck. 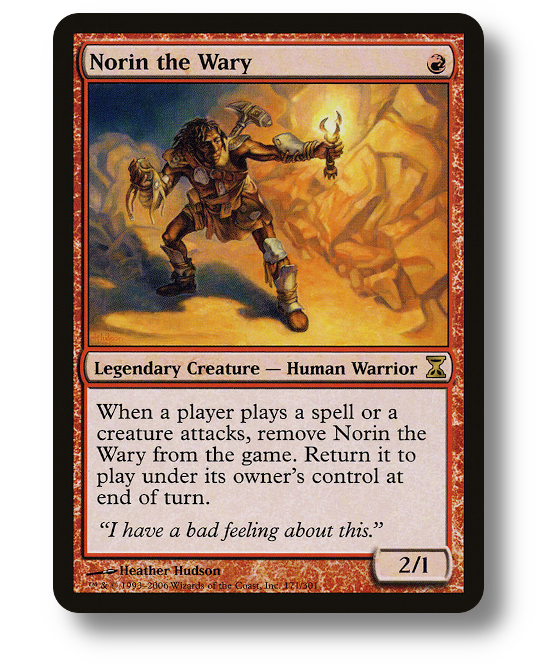 Norin the Wary, he’s our second part and he’s an interesting part because he’s really cheap and also he’s kinda bad, like stunningly bad. This is Time Spiral block, so back then the idea of red getting a 2/1 for 1 again without some deleritous downside was literally a joke that Wizards made because at the time they had a handle on how the metagame functioned, they seemed to think the problem of aggressive red decks was the 2/1 durdly creatures that could be blocked and killed, and not red having access to exceptionally efficient removal like Lightning Bolt. There was a point where Firedrinker Satyr was literally a joke and then the monsters went and printed it for real and it wasn’t even that good.

Anyway, so. Norin. Norin leaves the battlefield on (almost) every attack step and returns on every end step. He halso has two power. That’s going to be important for our next card. 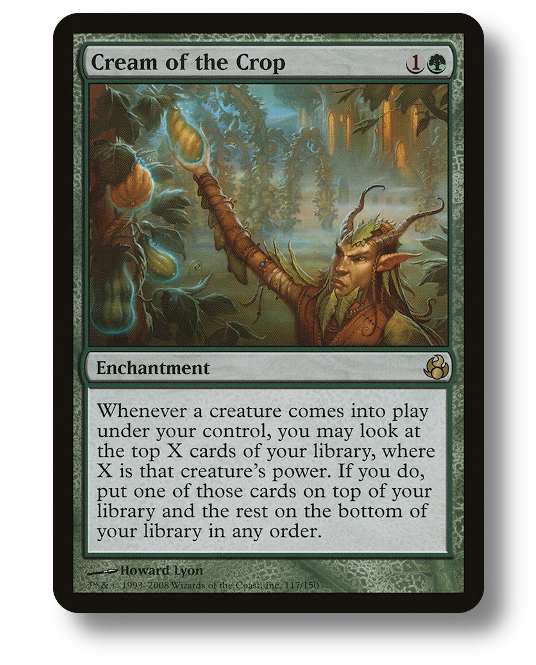 Cream of the Crop is a cheap enchantment, two mana, and it means that every time you drop a creature onto the battlefield, you get to pick the best card of your top X and put it on top. This card made no splash and I think it’s great. I also think it kinda could be reworked into a white card, but anyway, point is, it meant back in the day, you knew what your top card was, and high-power creatures hitting the board let you see more cards, but 1-power creatures didn’t let you see any new cards. 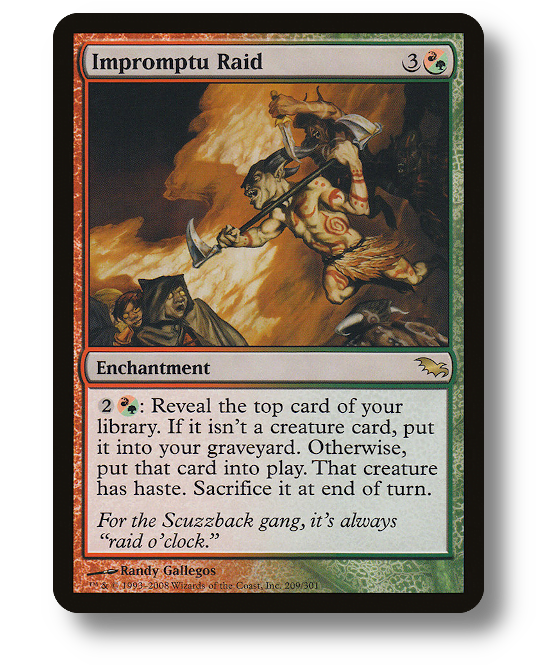 Impromptu Raid was one of the very first cards printed to show green giving stuff haste, in a set full of cards that made people have long arguments about ‘hey, can that colour do that,’ and the answer, Augury Adept is, no, not really, but anyway. This one however, represented something that stuck. It’s a hybrid riff on the card Sneak Attack.

Okay, so here’s the three bits I tried to make work in a deck.

My first draft of the deck was very limited, because I was focused on a two-colour mana base that didn’t push anything too hard, and its ideal curve could be pretty cool looking in casual environments. You could say, Norin T1, Leaf Gilder T2, T3 Impromptu Raid, T4 Cream of the Crop, trigger Norin to check the top two cards of your deck, then fire the Raid at the end of the turn, provoking some 6-power thing like a Spitebellows or, even cooler, a Woodfall Primus, to dump onto the battlefield and do things.

The thing is, that’s your ideal turn, and it doesn’t actually do much to set itself up.

What’s more, we’ve gotten a lot better options for things coming back from the yard when they die, with undying kinda stomping all over persist, and mana bases getting cheaper and more affordable and the entire modern card pool. They even brought Krosan Tusker back, and okay, that card isn’t great but it’s perfectly made for this deck that wants to have things in the deck that can have big power and serve hard, but don’t have to sit in your hand clogging it up.

I feel like I’m showing you the components of a formula without telling you what to do with it necessarily, like that teacher who told you how to make thermite and then very, very clearly noted that you shouldn’t use it for anything at all. But there’s a core of an interesting deck here and I just don’t know where it goes. Is it Wurmcoil Engine based? What about replacing Cream with Radha? But maybe she works well with Cream? Or maybe one of the colours shouldn’t be green or red, and you can use stuff like blue to get more recurrent scries? Or maybe –

And look, 60 card formats aren’t my jam any more, I’m just not inclined to play them. I don’t know what to do with these bits.

But it’s interesting to play with them around.