The history of the colour pie has been a fascinating thing to watch in motion.

I was very firmly ensconced in the idea that other people had opinions on the colour pie, and I did too, but mine were closer to being right. It just so happened a lot of my opinions of the time have been vindicated, which really is no special sign of my insights, especially since some of the people I personally agreed with actually got jobs at Wizards and made the changes happen.

One of the most counterintuitive things that happened grows from a complaint I had around Future Sight. I’m not going to link the article because oh my god I was the worsttttt, but I wrote about Narcomeba an idea that I’ll paraphrase here and I feel reflected an idea around the time:

You print experimental mechanics in blue, because blue does random, odd, tricky things, then when the time comes to expand on the mechanic, blue is the colour that gets the best version of it, because of ‘precedent.’

The problem, at the time, was that blue really didn’t have any good creature mechanics. It arguably had – and has – the best one, with flying, but otherwise, creatures in blue were pretty bad, meaning that blue couldn’t really mount an offensive strategy. Blue creatures could be as good as everyone else’s at the top end – Meloku and Keiga remain standouts in my mind as problems they wouldn’t ever fix.

It was always kinda timid; if we follow through on the philosophy, then green will have ground forces that can blunt our current standards for creature combat, white will need even better weenies – it’s an arms race that ends with everyone doing better but blue, and with a game that, we feared at the time, would be brutish and meatheaded. Blue would disappear, there’d be no value to control or counterspells or bounce, which was pretty funny and silly in hindsight.

The thing that should have stood out to me at the time was how many different bad consequences there were to changing anything. You see, if blue lost spot hard control like Counterspell (and Rune Snag and Force Spike and Syncopate and Circular Logic and Liquefy and Envelop and…), combo would run rampant. There’d be no way to threaten or disrupt it without that one tool in the format. Also, aggro would run rampant, because there’d be no way to stop and slow them down in an early game and it’d become a whole game of racing. Also, control would become oppressive and work as a prison style, doing nothing but constantly wrathing and regrowing their deck because there was no answer to their bulk removal.

Pro tip: When everything can go wrong in a design by making a change to one element, that element is either really doing too much, or maybe people are making flawed predictions.

There was some strength to it. I mean, back in the day, blue had good, efficient tempo creatures and counterspells and burn and that meant you got flying men decks, decks that honestly are pretty terrifying if they were legal in a format that isn’t also populated by Stax and Workshop.

What followed was a slow process of removing blue’s most obvious power in a format while also giving it a truly ridiculous amount of power in other ways that was kind of hilarious in hindsight.

Mike Flores referred, for a while, to ‘tap-out blue.’ The idea was a blue deck that could just get to six – not eight, not nine, but six – and just drop a huge threat that was on its own going to be better than anything your opponent did with their turn. That usually meant Keiga or Meloku. What, your opponent kills your Keiga when you tap out? So what, you take their best threat, use it to block their next best threat, and now you’ve traded for three of their cards. Keiga just turned into Ancestral Recall, and if that doesn’t happen, you have an enormous dragon. Bear in mind at this point, one of the best green threats in the game – and it was a good threat – was Gnarled Mass.

Being able to swing an Umezawa’s Jitte better on-curve than anyone else was a big deal.

I was really salty about Keiga but they were part of a sort of system cleanse. A purification of the bloodstream. As blue’s tap-out threats got better (hi, Teferi #1), their need to control the game in a conventional way became less obvious. Blue could slowly get worse in those areas we saw as ‘necessary’ in the name of getting better in areas we saw as ‘new.’ It wasn’t really new – it was the same thing as ever. Blue was controlling games by investing mana, it just felt less like a prison and more like a fight.

Eventually, we come around to this little creature: 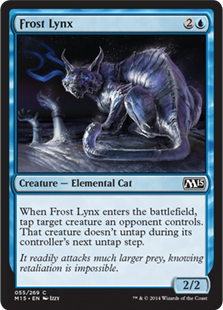 This is a perfectly reasonable common. When I saw it was printed in Iconic Masters, it made me smile. Because it reminded me of how blue creatures used to be so bad, and just by letting blue play around on the same playing field as others in a blue way, we were able to enjoy a game that was more balanced.

Green took a lot more work, but whatever, Ken Nagle can only do so much.