Martens are a grouping of small, fuzzy predatory animals that populate most of the continents in the northern hemisphere. They’re in that category of animals that are uncommon enough that our major point of comparison in European culture is to compare them to things they’re not like, so the comparisons tend to be ‘like a cat, but.’

It’s possible that you’re aware enough of animals to know about ferrets or skunks, and those are the better starting place to talk about martens. They are mustelids, the category of carnivorous mammals that includes otters, badgers, wolverines, and weasels. If you’re curious about how we tell ‘mustelidity’ in things, well, these days we do it with cladistics, rather than just squinting at the animal’s bits, but there are some common traits. Mustelids tend to have elongated bodies, short legs, round ears, and thick fur, which is also why probably the most high profile mustelid is famous for being separated from its fur – the mink. 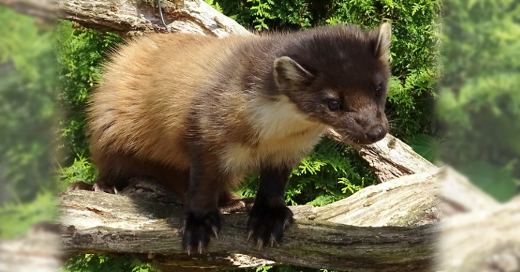 Martens are forest-dwelling predators that seem to thrive well enough in spaces where there may be territory but not necessarily a lot of space. If you go to a Russian taiga, you’ll find martens there – unable to make large, elaborate burrows in the cold ground like a Badger’s set, they instead run around along tree branches, jumping and bouncing and holing up in small hollows in trees, using the way their bodies are flexible and bendy to make comfortable resting places in ridiculous positions.

We once kept ferrets, and they had this same trait – you’d sometimes find one, curled up in a loop, feet in the air, nose to butt, able to make themselves into a sort of fanged donut any time you left them with something to nestle into. Martens live in these environments by predating on smaller mammals like mice and shrews, hunting birds – which they can even do by springing into the air from branches – and stealing eggs from nests and honey from hives.

Martens are currently ‘least concern’ level of endangered, and they are very cute. They are not domesticated and it is not advised you approach them if you see one in the wild.

Why am I talking about this?