It’s not often people approach me and suggest anime to me. I’m pretty fidgety about anime these days, because I watch it subbed (for no reason I can adequately explain) and I don’t like watching TV shows I can’t watch while I work on other things. Still, it was in Netflix, it was easy to get, and what they hey, it looked kinda interesting so let’s check out this anime.

It opens with a character losing a poker hand based on an Amazing Hand, which is a huge red flag for me about people not knowing how poker works. This was not an auspicious beginning for a series that I later heard described as Death Note For Money.

Anyway, I quite liked Kakegurui. 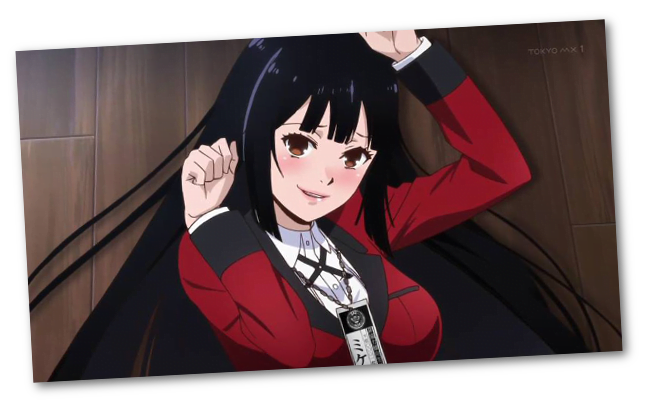 Normally when I like an anime I can point to the plot, but the plot in Kakegurui isn’t really all that interesting. You watch characters move from game to game, see their financial straits change, but they don’t seem to have an actual impact. It’s an anime that talks as if its stakes are large and they’ll impact characters for their entire lives, but mostly the experience you’re following is a sequence of magic circles – and rather than the story being about developing a central character, the story is much more about proving to the audience that no really, what you see is what you get.

I am a bit of a sucker for game design anime. Not sports anime, or competition anime – things like your Beyblades and your Haikyu!!, which are about the process of becoming good at games and playing them against opponents, often in recurring matches. Mostly they’re for games that are in some way solvable – there’s a little more in common with math than it is with the conventional interplay of game design. In a way, Death Note is in this space, and it sucks, but so is Liar Game, a series I really like. 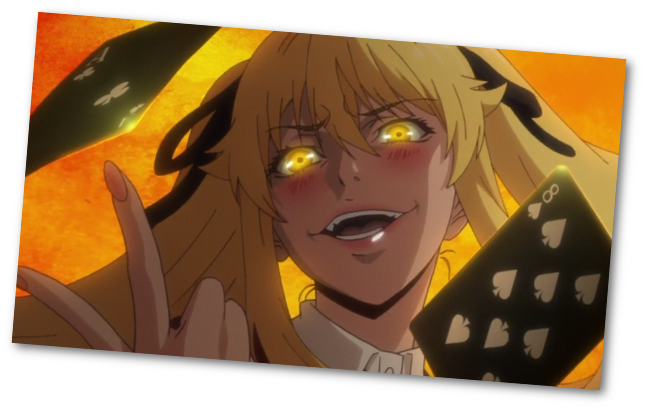 The basic idea of these series is sort of equal parts math textbook and whodunnit mystery: The story uses a game to set up a set of arbitary rules, and then presents one of the characters as a detective trying to solve the situation. You get some of the tension of a mystery, you get some of the stakes of a game, but you’re not really here to see the narrative of a sports story, you’re here to watch the story explain how the puzzles of the story work, how to solve them, and how the players in the story deduced and solved them.

What makes this particularly fun – to me, a fan of Columbo – is that often, the reader is privy to more information than the characters in the game; readers can see strategies from all sides, perhaps are given more information about the rules than the players, or maybe they’re just able to follow a particular player’s mental pathway through the game from a commanding position. So you sometimes know more than the characters are shown to know, then get to watch as a character from their position comes to understand the system and overcome it. 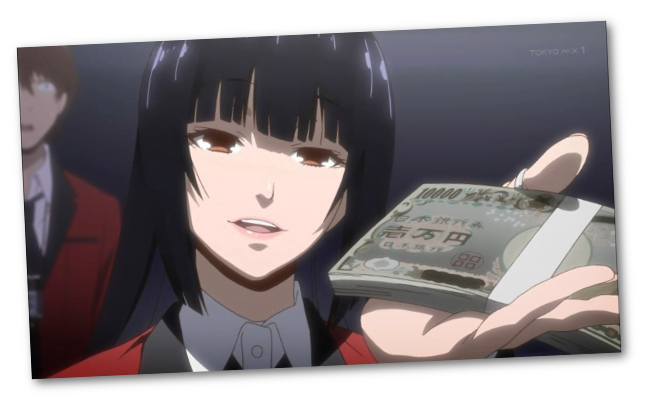 What I found really interesting about Kakegurui is the way the anime concludes; that is, as part of a much bigger manga series, it doesn’t actually have a conclusion you could call an end, but it does actually resolve an interesting game, and say, well that’s all we’re going to do, I hope you had fun, the characters continue on more or less as you expected. 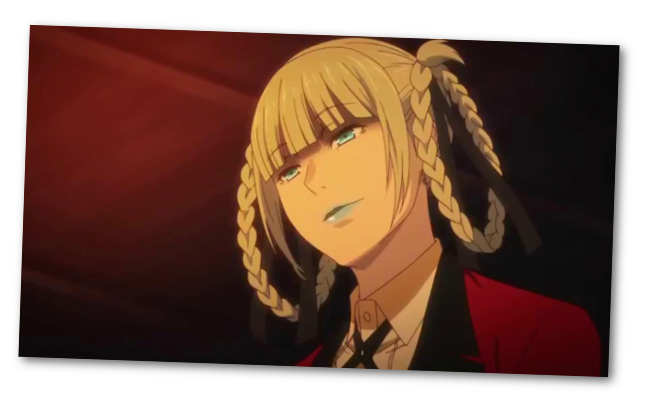 Overall I consider Kakegurui a show I enjoyed, but also a show I’d fastforward through at times and a show whose puzzley structures were interesting to me, but I’m a huge nerd for game design puzzles. If you like tits and tension and game design, check it out, but don’t stress if you’re looking for something with a lot of character development or particularly fascinating plot. There’s no conspiracy or end point to the story of the anime – just watching a bunch of characters have Math Duels at one another.