Let’s talk about mythology and the remix and symbolism and men’s failure to communicate and the way queerness spreads to fill empty space and the absolute nonsense that is SNK worldbuilding. 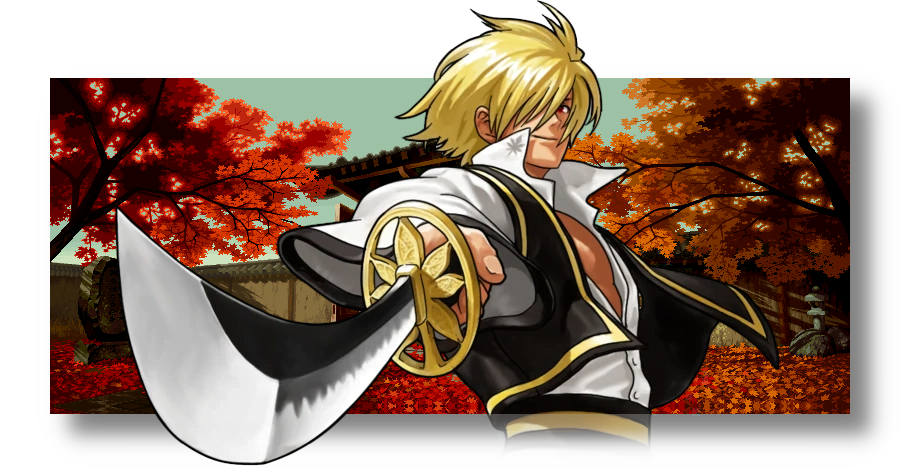 Fight games are dumb. Fight games as a genre are this space where the mechanical demands of the game are extremely simple (and like, it’s not extremely simple, because character design and visual language of the fight game is extremely hard and extremely complicated but in the context of all the things the game is asking of you, and in contrast to anything else the game needs to work no it’s pretty simple really, sorry fight game nerds, all things are magnifying in complexity endlessly). You need at least one character who can interestingly fight, with the input system that’s available to you. We have some standards for how you do that, and you can, in a Mcluahn-ish fashion point to the ways that the input mechanisms of a fight game, flowing from the arcade cabinet, are kind of all built around the things you can ask that kind of machinery to do.

From that you get things like special input commands, you know, special moves, and that orthodoxy of inputs and the challenges of modular hardware (like, you do know that arcade cabinets could just swap the boards and be a different game, right? Like I didn’t know that until Billy Mitchell used that to cheat on video) mean that this whole genre of games tends to be shaped within those limitations. The genre’s genesis is this centralised location that wanted to eat two players’ payment at a time, and so it was important that the game could pull your attention out of nowhere, and getting you to put two quarters in at a time rather than just one (listen to me, like we used quarters here) was better, so the game had to be good at fighting one another, with just enough visual flair to get your attention.

This pressure meant that game companies had to make games that were exciting to look at, vibrant and colourful to watch in action, engaging to play, and visually distinct to enable gameplay. What you never had to do, what was never part of this conversation, was whether or not those characters had to make one god-damn licking bit of sense, and fighting games have, as the tradition since that point, resisted enthusiastically doing anything to amend that. Fight Game lore is, simply put, nonsense, and I want you to bear that in mind when I then launch into the next line.

So, Last Blade is a comparatively simple fighting game. 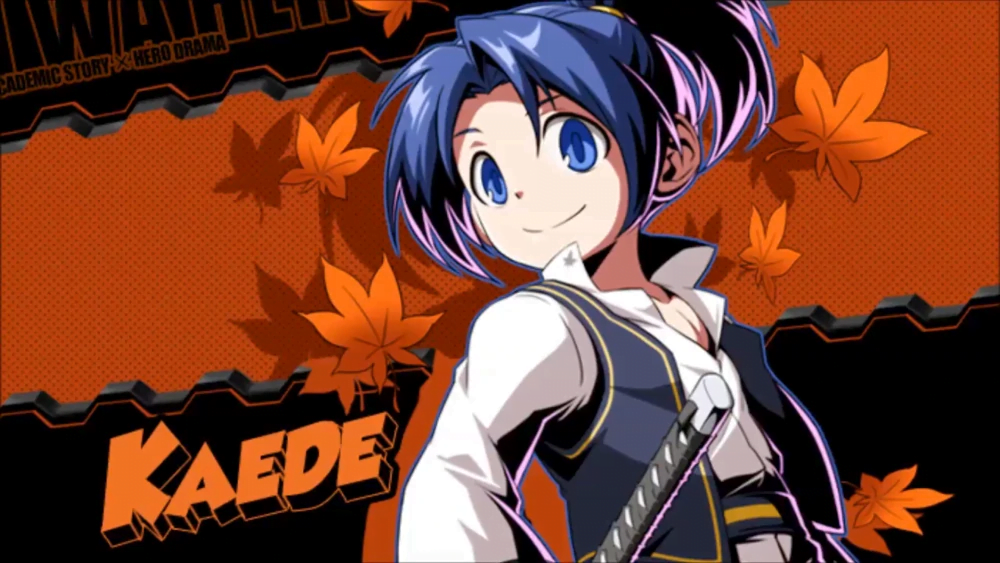 Last Blade is a sword-fighting fight game, where instead of the SNK standards of a control scheme of joystick plus strong/light punch, strong/light kick, instead you have three different buttons To Sword, and a kick. Because it’s an SNK game, you absolutely need a move that’s your quick hey fuckin quittit move, and that’s your kick. But the point of the game is Swording Swordily at people, including a dedicated parry button.

Set in the 19th century (that’s the 1800s, not the 1900s you nerds), Last Blade tells the story of a bunch of swordy people as they sword around a gate that’s opening up because of a ritual, involving a sword, as performed by a ritualist, with a sword, as he seeks to … make a sword… I think. The sequel also involves a dude who’s a haunted sword that wants to kill everyone. Greater plot, honestly not that important.

Kaede is one of the heroic protagonist trio. You see these a lot, especially in anime, where one character is the basic image of the narrative, another character opposes them while still pursuing the same aim, and a third character shows the way they work together. It’s your typical Hegalian Sonic/Tails/Shadow dialectic. Kaede is our Sonic, the, I-kid-you-not-no-really Ryu Ryuserson from Street Fighter: All Of Them. Ryu, you may remember, is a character designed to have the simplest possible range of important inputs so that you can get to grips with special moves quickly rather than have to worry about executing perfectly as you learn the ropes of timing and control. That’s why, if you break it down, Ryu has, kind of essentially, three special moves: a fireball (the hadoken), a rising uppercut that hits very hard (the shoryuken) and a spinny kick that hits on both sides of him (the hurricane kick). Yes, Ramona, I know there’s more, but that’s really all you need to know to get to grips with how Ryu works.

SNK and Capcom have very different visions of ‘approachable for new players.’ 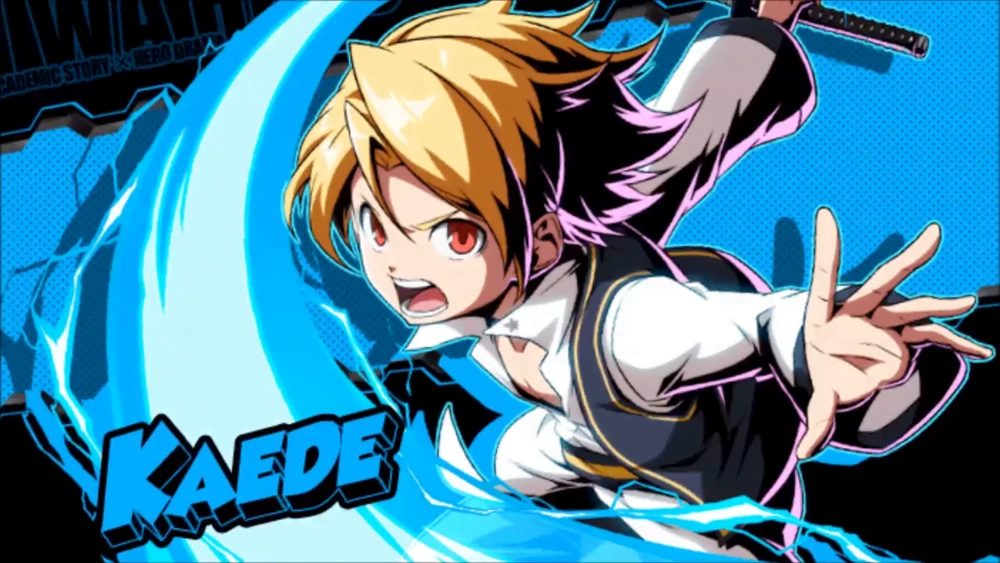 All that is about how Kaede works mechanically, and this is where I planned to tell you how I play Kaede when I play the game against another player, but I thought about it and realised I could summarise that entire section with just poorly and rarely. I am not good at fighting games at base, even though I find the games beautiful and fun to analyse and examine in terms of their design, but telling you about how many times I managed to survive long enough to activate a speed mode for Kaede in a head to head game, then completely and colossally fail to do anything with it, instead running up to my opponent and kicking them in the shin, ending the combo mode having done bloody nothing is pretty funny when I just point out it’s like, five.

The character of Kaede is still your central figure of the protagonist tryptich. In the backstory of Last Blade, there was this wise old mentor master dude, who as it turns out was responsible for slash connected to this gate thingy, whatever, but he raised Kaede, his son, and two more orphans, named Moriya (Shadow) and Yuki (Tails). One day, Kaede and Yuki came home and found Moriya standing over their dead father figure, and rather than communicate about it, Moriya pouted, fought Kaede, then fled.

Moriya, by the way, did not kill their mentor, but you know, talking about feelings is really hard.

Anyway, Kaede, Yuki and Moriya then went on a rolling quest to find one another, bring one another to justice, drive one another away, all that nonsense, in the vague middle space of fight game win quotes, and eventually, it turns out that Moriya did not kill their mentor, who also wasn’t really dead, showing that the whole affair was over nothing, but also, over how all their feelings were too big to have a sensible conversation. And these characters keep having sword fights, and they keep stopping each other from having sword fights, and uhm.

Kaede has the spirit of the Great East Wind Dragon in him, Seiryu. Seiryu’s power comes out in a flash of power that lets Kaede fling around lightning powers, makes him blonde, gives him red eyes, and maybe makes him instrumental in shutting the magic gate. This means that Kaede comes in two modes, either as his own Shingo Yabuki (a softboy weenus who wants to live up to an impossible standard) and his own Yami Yugi (a powerful badass who shows up, puppets your body, and occasionally yanks plot solutions out of rear). 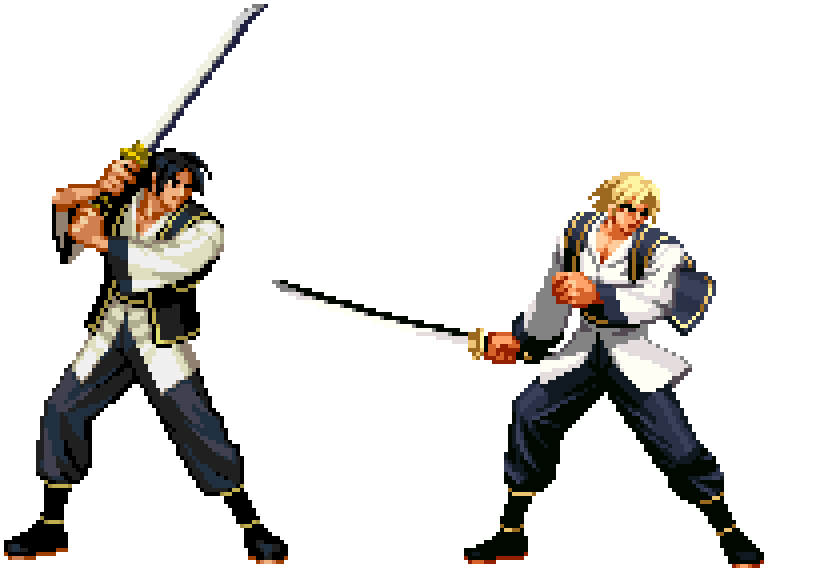 Realistically speaking what this means is that Kaede gets to be two different forms of hot. He is his own virgin and chad meme, a softboy who brings with him a flipped switch that turns on the Big Dragon Energy. And the thing is, all of what I’ve described is, mostly stuff that you’re not going to find if you play the game. It’s there, sort of, but it’s not explained, not properly. You have to basically compile a book report from other games to try and put together the explanation for just who Kaede is, and what even happened with Moriya and Yuki by the end, which creates this negative space that nonetheless depicts Moriya and Kaede and Yuki as constantly hanging around each other in casual, comfortable times, showing them relaxing and being friends around each other, while also the narrative making it clear these characters are constantly hunting one another except when they’re teaming up against a greater evil.

And look, when two guys in a narrative from a homophobic time refuse to talk to one another about their feelings, especially when it’s very clear they feel very intensely about each other and maybe if their primary mode of expression is a phallic martial art, and their feelings are somehow unstated, like there’s some kind of love that dare not speak its name, there’s this subtext that infiltrates that space.

Oh, it doesn’t have to be that.

Look, queer readings are often about looking at a text and noticing what doesn’t happen. What’s left or implied to be obvious by the narrative structures is often stuff that serves an existing hierarchy (like, people often interpret Yuki, Kaede, and Moriya as a love triangle where Yuki has to choose between the two boys), but the absence of stating that implies a host of different alternatives. They could be polyamrous. They could all be ace. Moriya and Kaede may totally bang while Yuki loves and respects them both. They could be raised as siblings and so the entire idea of that is weird. We don’t get that, but because the primary purpose of the fight game narrative is not to declare things, but to present an outline of where things are implied to happen, the absence of a declaration can be treated as a declaration of an absence.

This isn’t to say that fight games are queer culture (though, just how many of the Street Fighters bosses are trans women now?), but it is to say that when you give us nothing, we will create in the space of that nothing. 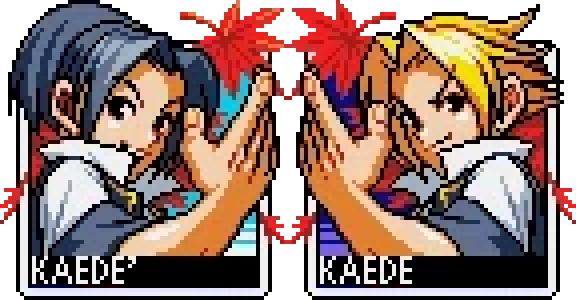 By the way, there’s no real declarative ‘final point’ for the Last Blade universe. Everything in it happened over a century ago from the perspective of the typical games. The relationship of this space to time is also total nonsense. We know the world still exists, so odds are good that the plans of Setsuna and Kagami didn’t work, so that’s something.

What we’re left with then is not the deep realities of some heavy canon, but rather a sketched outline that shows you a cute boy, who shapeshifts, has a symbiote, and may or may not have a boyfriend and girlfriend who he loves very much but is shy to talk to.

Also, this post was the result of being asked to write it! So go on, shows that if you ask me things, I will get around to answering it and writing a few hundred words about it eventually!