There’s chances are you’ve seen this game on Steam. You may have seen it show up in Pride lists. You may have seen screenshots out of context. And what you see is a pixel art metroidvania with upgrade paths and a female protagonist and she has a little buddy dragon and you may be asking yourself hey, is this too good to be true? 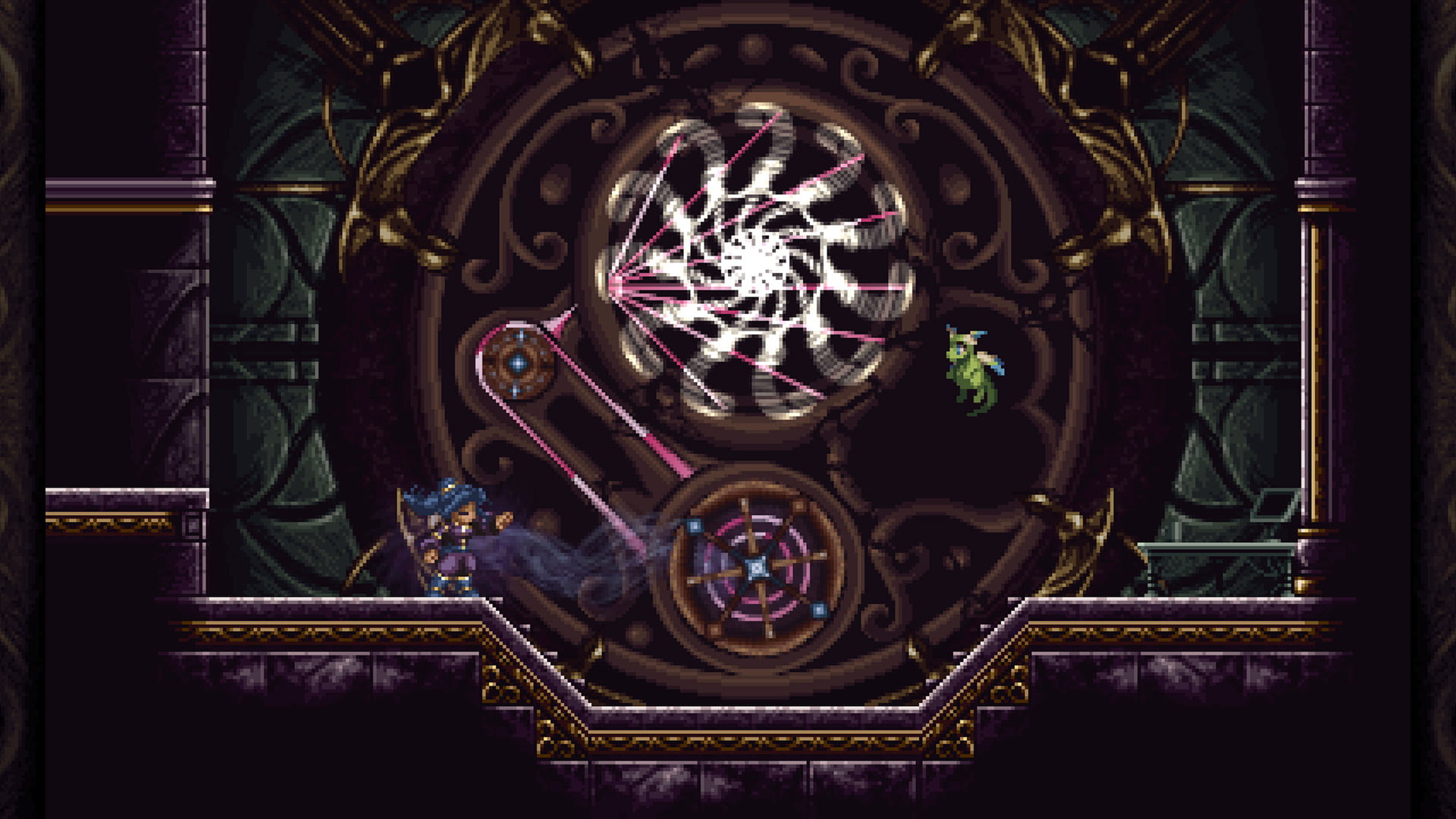 Alright, let’s go by just the vital info. Timespinners is a 2d exploration platformer because I say ‘metroidvania’ Jeb will give me a look and a sigh. In this game, you play a Time Messenger, who, as part of her commitment to the job of Messaging Time, has to give up her connection to her history, and be forgotten. That’s rough! What ensues then is a narrative about protecting the world from apocalyptic events by travelling around in time, and just coincidentally, doing boss fights that involve killing people or things whose presence in time fucks things up.

I am simplifying, don’t worry too much about it, the story is pretty good and we’ll get to it more.

The point is, at its essence, Timespinners is like if Chrono Trigger had a cousin game that was Castlevania. If that phrase on its own made part of your brain that’s still fourteen years old look up and go yes please, then I have some good news for that part of you.

When talking about Timespinners as a game, it’s just an excellent Unit Of Game. The controls are repsonsive, the monsters are resistant but just resistant enough that once you get used to their flow and patterns you feel good, you can grind if you like, but you don’t have to, and there’s even customisable powers so you can build a character who plays a particular way if you enjoy playing that way. Really, Timespinner is a polished, high quality videogame of its type that, when you consider it in terms of ‘games’ as a general category, is definitely one of those excellent games that is worth the price of admission. Go into it aware that you’re getting a big, talky, explorey kind of game, and you’ll get your money’s worth. 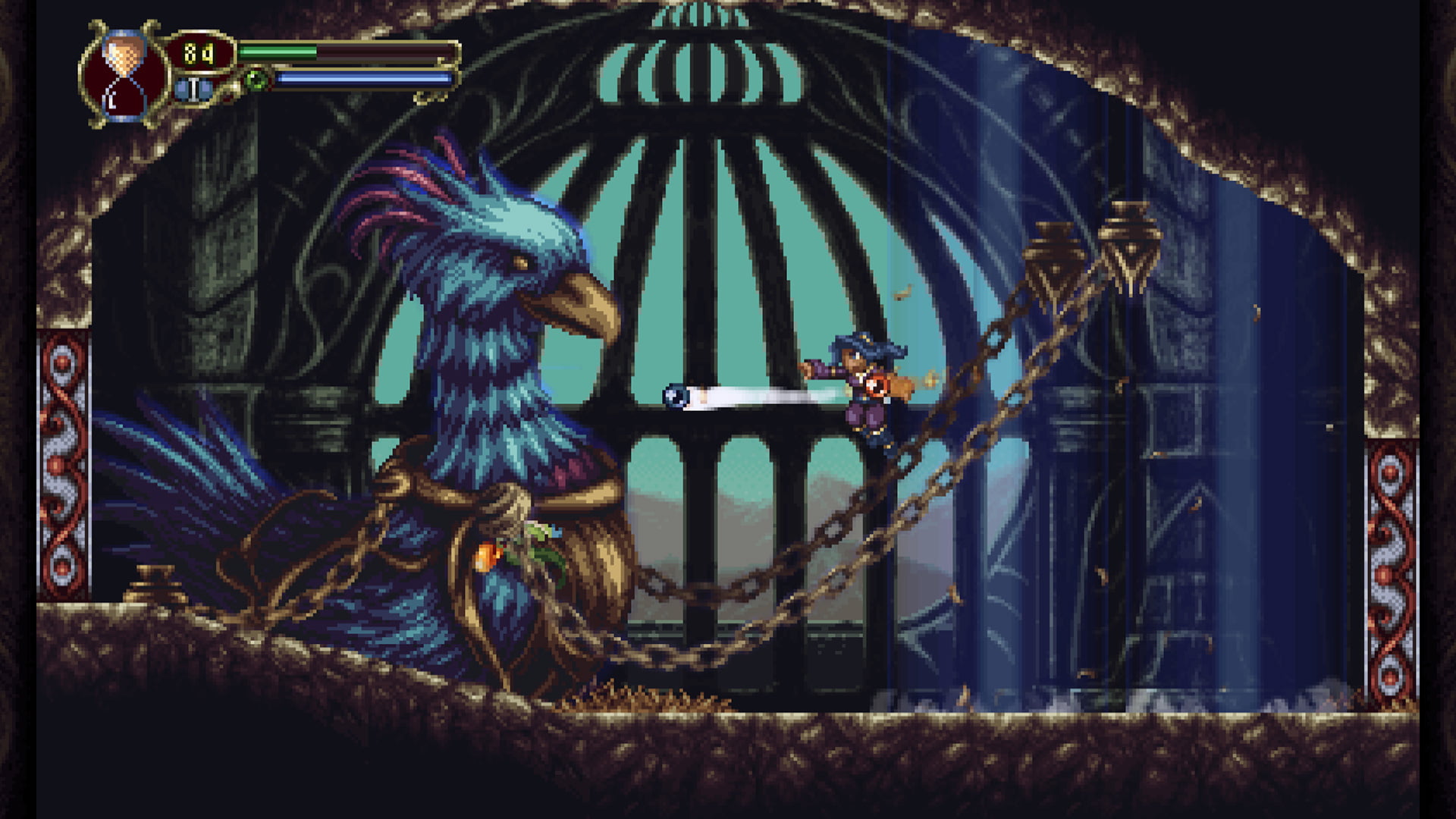 It’s also a pretty queer game? I’m not saying that it’s like, this sort of personal and intimate story about how queerness unfolds in the self or nothing. It’s just… really queer.

There’s this line I’ve been using about queer games, where I want to make sure I’m not talking about ‘queer games’ like Fire Emblem: Thrire Hemblems, where the queerness in the narrative is entirely missable if you choose not to smooch someone of the same gender, and that queerness is entirely identical to a hetero version of that queerness. I was looking for games with queer life rather than games with queer options.

The queer life in Timespinner is almost missable.

It’s missable for two reasons. The first is that this is a videogame which does a pretty good job of having a convenient interface. There’s a lot of lore and conversations, but that stuff is all held in text boxes, text boxes you can zip through if you press a button because you’re having lots of fun jumpy climby runny divey through all this fun exploration space with like, bats made out of oranges in it. Yes, straight up, it is entirely possible to miss queerness in this game because I am a cretinous gamer who was so busy enjoying the anime that I failed to read the manga.

The other reason it’s possible to miss queerness in Timespinner is because it can be really easy to miss the existence of air. 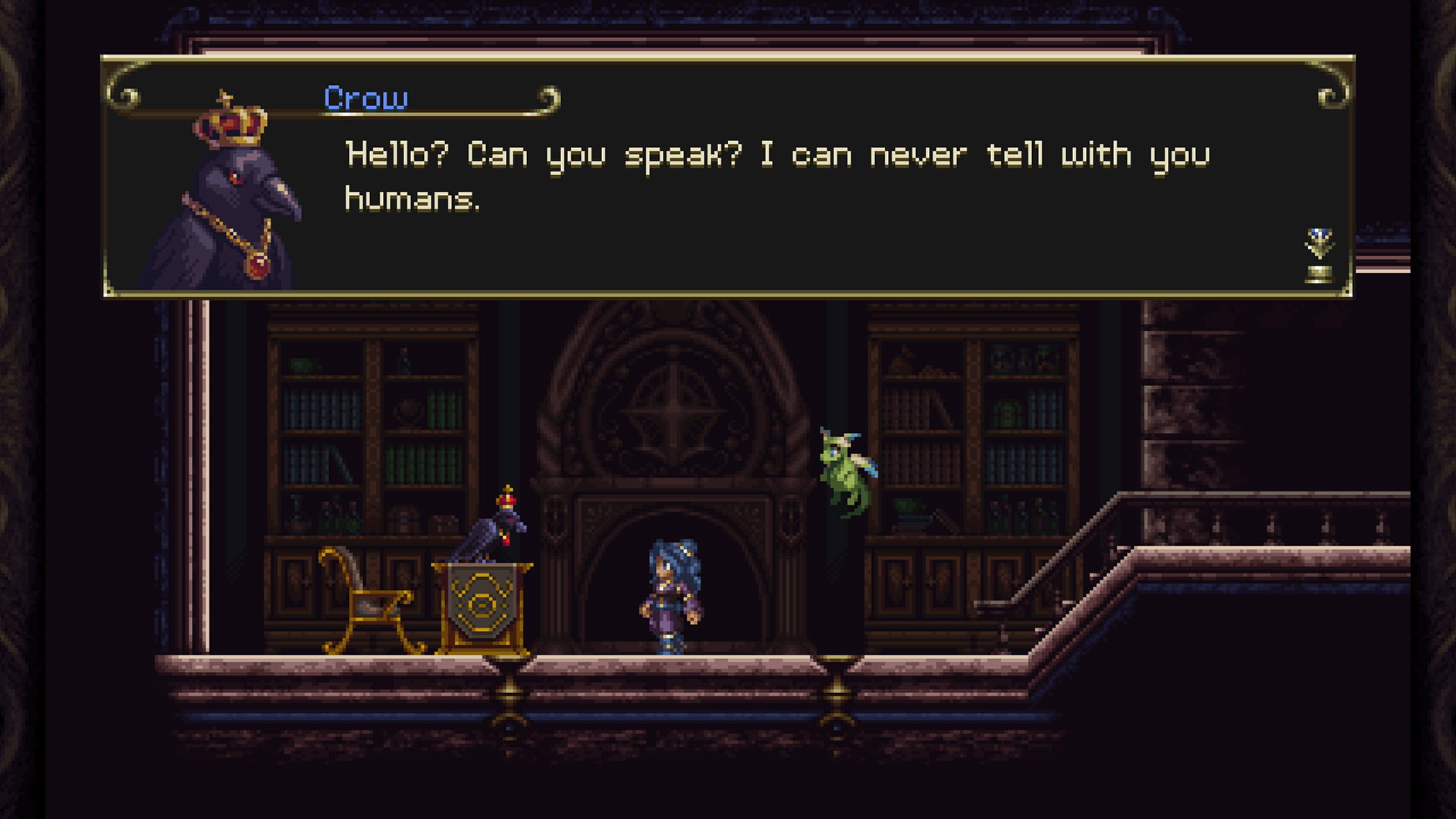 Characters in Timespinner are pretty much Not Hetero by default. Oh there’s some hetero relationships, and they’re not demonised or painted in a weird light, but it’s also simply not assumed that characters are straight, and therefore, you find yourself dealing with queer relationships, atypical heterosexual relationships, and even at least one trans character.

Notice that by the way? I say ‘at least one’ because I’m hedging my bets. I know there’s one. I know they’re a romantic opportunity, too! The nature of this game and its world even paints the idea of a space where if there were other trans characters, I assumed I’d missed them!

In fact, this game includes a really great moment of queer characterisation where your heroic character runs into a sex demon boss – I’d say succubus, that kinda thing, but then I’d have that boring conversation about tops and bottoms and you either know it already or you find it boring. Anyway, the thing is, you encounter a sex demon.

Which presents both a male and a female form while it talks about your desires.

I had this moment when that happened where I momentarily wondered if this was some sort of weird niche way of letting the player ‘choose’ the sexuality, in that Forced Femblem way, by which target you attacked… but then, I found, nope. Nope, it’s just that a demon that can look at her sexuality was able to go ‘well, both boys and girls are on the table.’

Anyway, that’s all cool. Good game, queer life, all thumbs up, all smiley?

I get it. Time travel stories are about showing contrasts of possibility. That’s okay. It’s not unreasonable for you to want to tell a story that’s a time travel story and then include all those time travel tropes. Almost all time travel narratives we have in media at this point can’t resist that framing, the presentation where time travel, while powerful, is never really going to give you a happy ending.

I just always feel when a game tells me a story about having power and a will to do good, I actually get to do good, rather than leave me with that faint, end-of-narrative feeling of being a bit bummed out because hey, time travel stories are all meant to be like this, right?

Anyway, great game. Check it out if you’re into this kind of thing. I fell out of it, as is the case of Exploration Platformers, and this one has multiple endings, so I don’t feel bad or weird about it.