Hey, have you seen this episode of Fargo? No? Interested in it? Care about spoilers? Don’t care about spoilers? Well, okay, look, no matter how you cut it, this is a thing where it’s worth being deliberately ambiguous about what it is, and with that in mind, here’s a break and an image for the twitter preview so you can be pretty sure whether or not you want to read on. 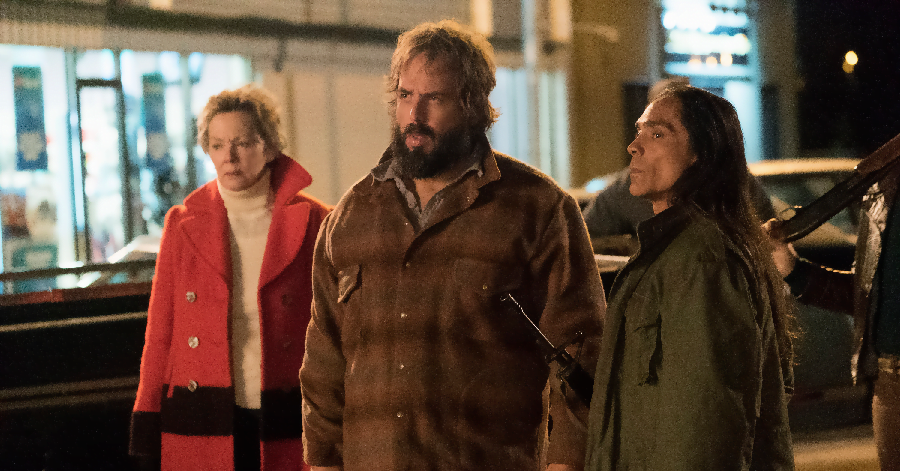 Alright, like in Fargo season 2 there’s a point where a massive gunfight between two and a half factions of a crime syndicate and the police all comes to a head, and it’s basically the showcase for the whole series. It is a big deal, and in that big deal, there is an all-is-lost moment, where all the sympathetic characters are maybe doomed, some even at the hands of other sympathetic characters. It’s tense, and it’s gory, and it’s all done to an amazing soundtrack and you know, I think I might like this Fargo series.

Then, a UFO shows up.

Like an actual space ship. Whooms over head, spotlights on a fight. It’s enough of a distraction that some characters get away and some get a chance to live and some die. It’s a big moment. It’s also an actual, honest to god, Flying Saucer hanging over what has been for the most part, a grounded, ‘realistic’ crime drama about the middle of nowhere, a place where all the profit comes from things that pass through and barely anything that stays.

I thought when I saw this that it was brilliant, and then it moved on, and the rest of the series plays out in this really excellent, tense and taut narrative where all the things that happened thus far come to a head in the way that Fargo storytelling does. Still, when you go on the internet, there’s a bunch of people who fit in what we’ll politely call ‘the comment section’ complaining that the UFO encounter was, uh, well, they’ll say something like ‘dumb,’ and well, I don’t want to wade into all those comment sections, but I think thinking about this particular weird bit of the story is pretty cool.

One thing that keeps happening in Fargo is that there’s a grind to reality. There is a natural course for things, there are bad people doing bad things, and they hit each other and good people or people who aren’t otherwise involved just get caught in the crossfire. It’s a very primal vision of life, a very sad but also very weary view of things. Nothing is simple, nothing is singular – things always happen over and over again, and when they happen, that gives them time to happen once more. There is no machinery of justice at odds with the machinery of villainy – there is just the endless, unfair cycle of hard and bad things happening, over, and over again, and what spares you from them, for even just enough for one more day, is a coincidence.

Heroic characters don’t survive because they’re better or because they’re smarter or they’re getting some sort of drive for justice. Heroic characters in Fargo manage to get by, only a little bit at a time, because a coincidence happens, because someone trips over a table, because a flash flood a mile away sends a burst of water down hill. Nobody’s making choices of how to protect or save you, and the world around you is just… doing its thing.

And that’s why the UFO is such a wonderful moment, because it’s not doing anything either.

In the 1970s, the time of that season, UFOs weren’t crackpottery, not properly. They were pretty believable. The world was still full of darkness and strange nights and inaccurate timepieces and lost hours that people just weren’t necessarily paying attention to everything around them. Now, here, today, a UFO in a crime drama doesn’t make sense. It’s ridiculous. Our world swarms with cameras and the idea of UFOs showing up – and being left out of a police report! – is silly, because it’d be seen by thousands of people and cameras would get involved and all of that.

There’s a recurrent vision of ‘throughness’ too; A point is made in most every little story beat how important transporting through a place, just passing through, is what drives almost everyone and everything here. The Gerhardts are not wealthy for making things, they are wealthy for transporting things. Milligan is not there to stay, he is there to advance. Peggy is always trying to leave, and the Solversons are not long to stay as they are. It’s liminal.

And the UFO, just like the rest of them, just passes through.