For Asylum Jam 2017, I made a horror game based around that jam’s theme of a zero sum game. My game was very, very quickly made; I documented the process to an extent at the time. Since then I’ve sat it in a drawer and kind of ignored it.

The game at its core is a drafting game, but it’s not a simultaneous drafting game. The game works on a kind of draft I learned as rochester draft; you lay out all the cards on the table, in a grid, and players make choices one at a time, in a circle around the table. These stacks are weighted, so that in each stack, there’s a card that represents the ‘monster’ in this setting. The monster in this story is meant to be a sort of slasher movie monster ala Jason. As players die, they become ghosts, and those ghosts then get to haunt and complicate things for the remaining player, who is trying to escape.

I really like this simple little engine, and I like the way all the pieces work; with three ghosts at the table it can be really hard for the remaining player to pick their way through the stacks of cards that may or may not be boobytrapped by earlier player action. Players want to try and sabotage one another, but they don’t want to make their own potential future as the final player one of immediate defeat, either. The whole idea behind the game is that all victory is a zero sum game: You can only win when either everyone ‘loses’ or when all the other players have lost – and that’s the inspiration for the name, Camp Osum (0-Sum).

I’ve been thinking about revamping this game as a little October release, and I thought I’d give a shot of making the game use pixel art.

With that in mind (and I started this back in the first week of October), I’m going to do something a little different here and include a set of pictures from when I worked on this idea each point through the month. 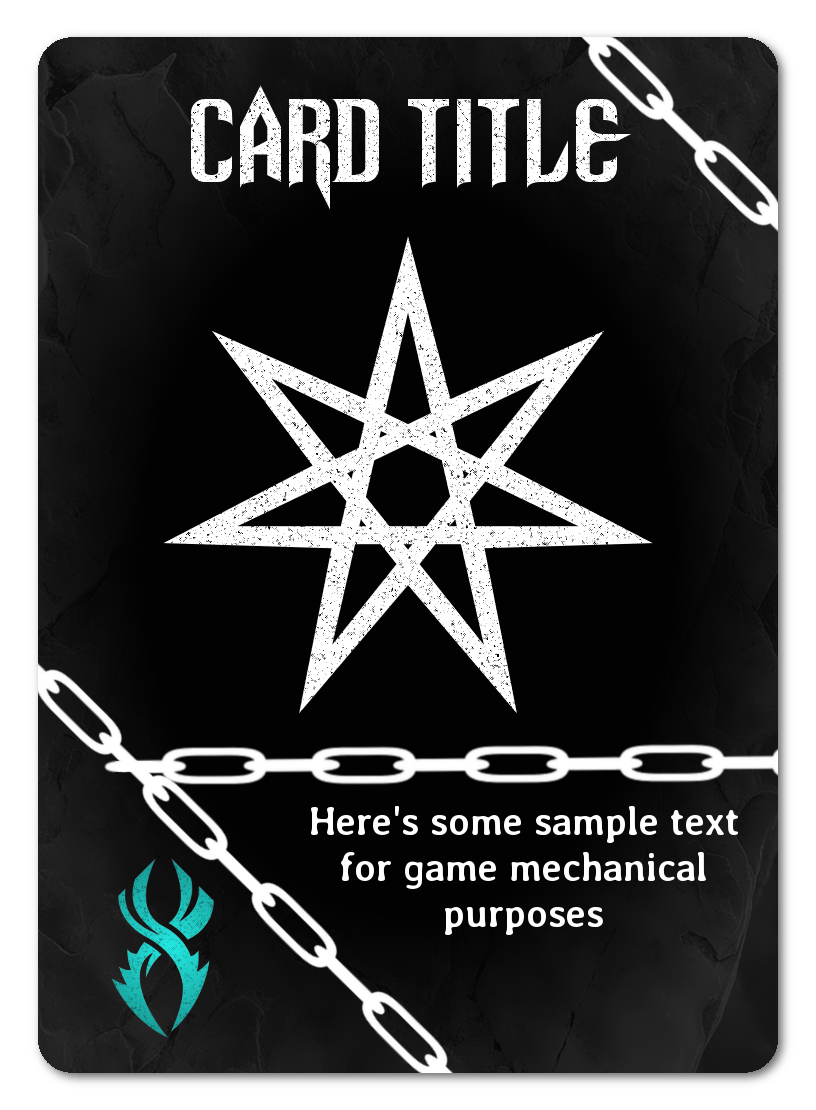 Here’s the first version from back in 2017. This isn’t a bad face but it’s definitely a harder aesthetic to work with for what I’m doing. I like this possibly for a different creepy game. This also makes the cards feel like mystical objects you interact with, suggesting you’re a mystical person, witches or warlocks doing a ritual, rather than the vibe I eventually arrived at. 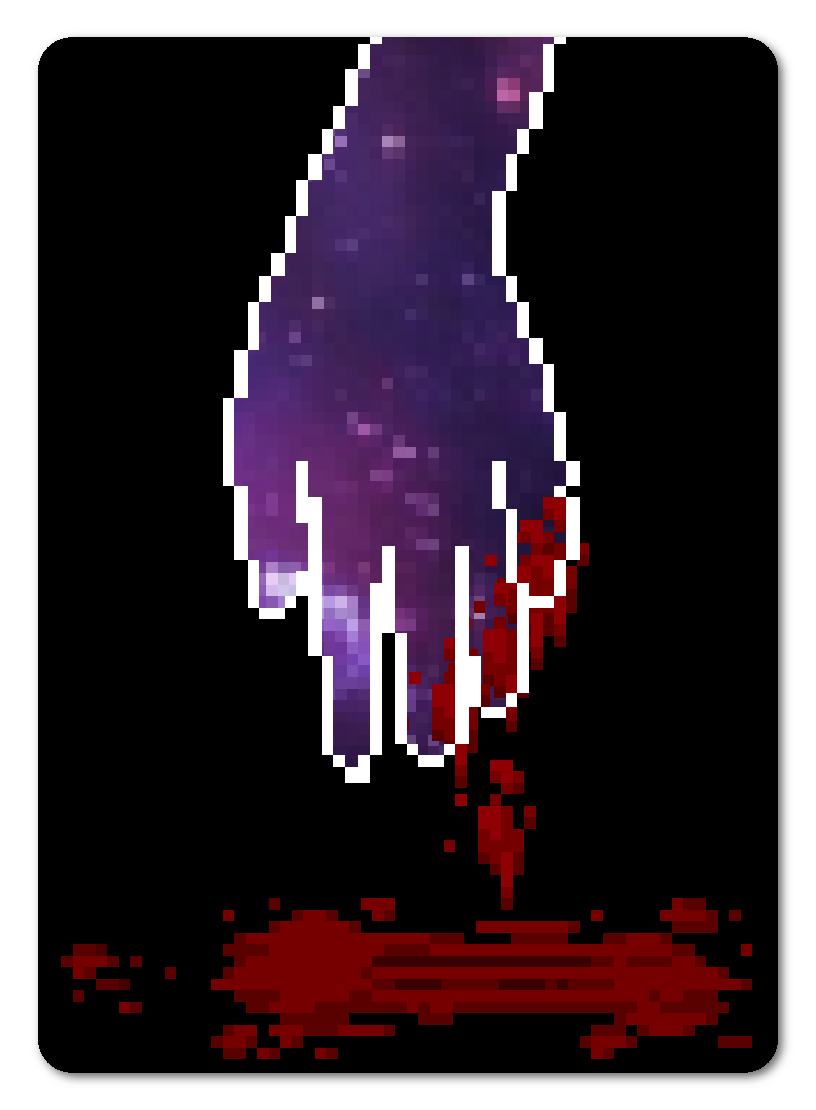 Here’s the first card back I devised while trying this pixel art aesthetic. In this case, the blood spatter is from a RPGMaker asset pack, which I like, and the hand is a redraw of something I found on a Google Image Search, which I like a lot. I also like using the starfield in the hand. In this case, the starfield is a pixellised photo of outer space from NASA, with a colour filter on it.

My main conclusions here are that I need to start working at the scale of the basic pixels and not try to work with scaled up pieces. 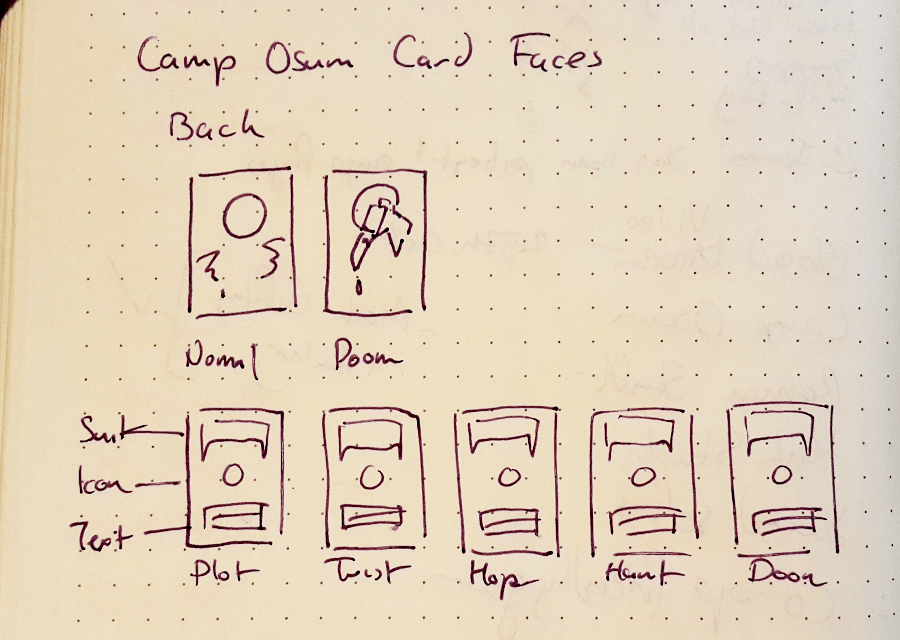 This week has also been heavily influenced by my time spent marking student work. I meant to have more material work done on this by now, but we’ll have to see how week 2 shakes out.

Time spent fussing around in a graphics editor yielded no real results, and I think it’s in part because I didn’t make specific decisions about what the card faces should want to represent. That led to this; a breakdown of the specific templates I want for each card face. In this sketch, I have to do seven template faces.

The Normal card back is present on all these cards. Doom cards, which attack players’ Plot importance and in some cases, just straight up ick someone, have their own card back, but that card back is meant to hide in a stack of the other cards. That means whatever makes it different needs to be obvious, but it also needs to be central.

The plots, twists, and hope cards are all pretty similar, and they can probably use a similar face. They’re going to face a challenge in what the icon in the centre of them represents though. For Hope cards, I feel like they can mostly represent objects: things that you can use to get away from the killer or things that you can use to save yourself. The plot and twist are going to be tricky too – if they have no mechanical text effect it might be best to just give them a simple icon like a halo or a ‘niceness’ symbol.

I think at the moment I need to define the villain, the Doom. What if it’s a slasher killer, or a horde of zombies? Do the players who die become horde instead of haunt? It’s time to check the art assets and see what I have on hand.

I’ve done some digging through my asset heaps, saved and stored assets from bundles and found that I’d spent the money on acquiring two different horror pixel bundles from the same artist. MalibuDarby has made some great asset packs and the Slasher Forest bundle gives me a lot of tools for backgrounds and card elements I want.

These assets cover a bunch of stuff that seems useful for Osum; there’s axes, crowbars, tin snips, medical kits, people, and some nice assets like tents and boats with bloodstains. Now, what’s also important about this is that I’m going to want these objects to sit correctly in the card face, so I may use these artworks to set the ‘size’ of my card frame: 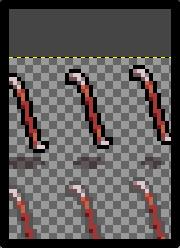 The card’s proportions are 93:130, so this is an area of that size, with the crowbar in the middle of it. With that in mind, I might be able to work out how ‘big’ the pixels are in this frame, and that will let me make the background frames using these pixel assets. Because it’s very important to always make things the right size with pixel art.

If I use this

The basic outline of Camp Osum to start with is 45 cards, divided into five categories:

First of all, all these cards need backs, but for Plot, Twist, Hope and Haunt, those cards all need to share a card back. Doom needs its own back, too. The 9 Plot and twist cards are very simply +1 and -2 to start with, so they currently are 9 faces, but that may not be able to produce an interesting game effect.

See, if all the Plot cards are a simple linear spectrum from 1-9, then there’s not a lot of room for comparison, and there’s a lot of judgment calls about what, in a plot, makes two characters precisely more or less important to the plot. There are a few clear signals that a character is important to a slasher story, but they don’t tend to be so simple and strict. Depending on art assets, this could be instead broken into say, 4 +1s, 3 +2s, and 2 +3s. This would mean there only needs to be 3 card faces.

The same is true for Twist cards – they’re meant to represent different plot revelations that diminish the value of heroic plot points for a major character. but saying it like that, I feel like there probably needs to be more plot cards than twist cards, and they may need to have a more confrontational relationship. Mechanically, doling out -1 plot or -3 plot works for a base template, but now I review the faces, I think that maybe Twist cards need to be simpler. They’ll still thematically represent various revelations about characters that show they’re not the ‘true’ final character of the story, so the faces will vary, but mechanically, the Twist cards may just be ‘make a player discard a Plot card.’

Okay, what’s a frame and what’s a face? A Frame is the basic template for how the card looks; the face is the specific image of that card. So all the Plot cards would have a generally similar front, so you could look at any Plot card and go ‘it’s a plot card’ but the actual specific card wouldn’t confuse you into thinking it was anything else.

With all this together, the sum of potential card faces for this runs something like:

Which translates to 26 faces. That’s pretty doable, though as I write this, not in the current time frame. As I write this, I may have to set this aside (October being a busy month for other reasons). But this is how these things go: Ongoing process, where having a plan gives me structure for working onwards.