This started out so simply.

This article is a continuation on the concept from yesterday, where I described a trope, Enemies With Benefits. That article started out as ‘five romance tropes I like.’ Then I sort of reflected on what I’d written and went: Hang on, this is more about how much the alternatives suck.’

That led to me rewriting it as ‘five romance tropes I think are crap.’ And then when I was done I realised I’d just restated the same thing multiple times and one recurrent joke just kept taking over and eventually we came around to the fact that this one specific thing really pissed me off and I might as well make that the thing.

Then something happened in the news that made me a little 👀

CONTENT WARNING: I’m not going to be talking about Buffy the Vampire Slayer as a full series. What follows this warning, immediately, is a second content warning about something I feel is relevant to the article but also kind of outlines what I’m not making the article about. That warning contains mentions of potential sexual impropriety and a celebrity who it seems sucks and you may not want to be here for that, even in a content warning.

CONTENT WARNING, PART TWO: This is going to be an article about something to do with the 90s TV series, Buffy The Vampire Slayer. That series’ fandom has been seriously impacted by credible accounts from numerous women who worked on the project that the director Joss Whedon sucks ass. Bear in mind this is not that specific complaints of sexual misconduct have been mentioned, but that Joss Whedon is creepy about women and he is abusive of his power and authority and that there are some comments that some women in the cast of the show have wanted to not elaborate on. It’s pretty simple that This Dude Sucks. I would normally leave it uncommented on in this way, except as I wrote this the news came out that Michelle Trachtenberg, who was 16 when she first appeared on Buffy, is one of the factors that meant I figured I should probably circle around this.

Basically; Joss Whedon sucks, and it’s public knowledge that he sucks, and I don’t want to complain about this thing in Buffy without making it clear that I’m aware he sucks and I don’t think him sucking is immaterial, and this is an ongoing thing and uh, if this story gets worse in the immediate, just like, be aware of it and maybe don’t read this if the main thing it makes you think of is something that sucks real bad.

Because hey, this is about something that sucks real bad but I want it to be about that in a fun way. There’s your two layers of content warning: I am aware of the problem, but I want to talk about the work. As with other works before me, though, pretending that it doesn’t exist or not giving you a chance to bail on it is a bit irresponsible of me. Joss Whedon’s Intention is the water this fish swims in. 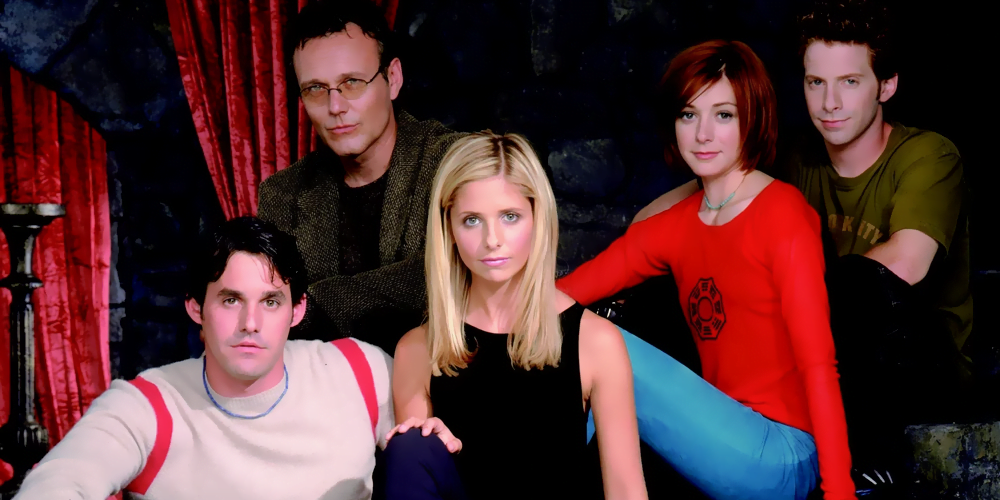 As I expressed my interest in the Enemies With Benefits trope that I described yesterday, I found myself thinking about good examples in media of this trope. It’s rarer than I thought it was in the media I like, which struck me as a surprise because hey, I like this, why doesn’t it stand out to me more? I went and did a bit of a check on that archive of all things nerd intellegentsia making pointless lists, Tvtropes, and there I found that they had a trope for this, under the category of Foe Yay, and they call it Dating Catwoman.

And then I read through the list and remembered Buffy the Vampire Slayer.

For those unfamiliar with Buffy the Vampire Slayer this article is already very long and I don’t… know how you could be unfamiliar with it. It was an action TV horror comedy from the 90s, by Joss Whedon and featured a lot of people who have moved on to successful careers in some other capacity. It was phenomenally popular but in that kinda low-key ‘oh, you like mainstream shows? well, I like cool things like Buffy.’

This is not going to be a crash course on things. This is going to be me, bringing up an old show, and pissing and moaning about it, because I think the way it does something I like, it sucks at. 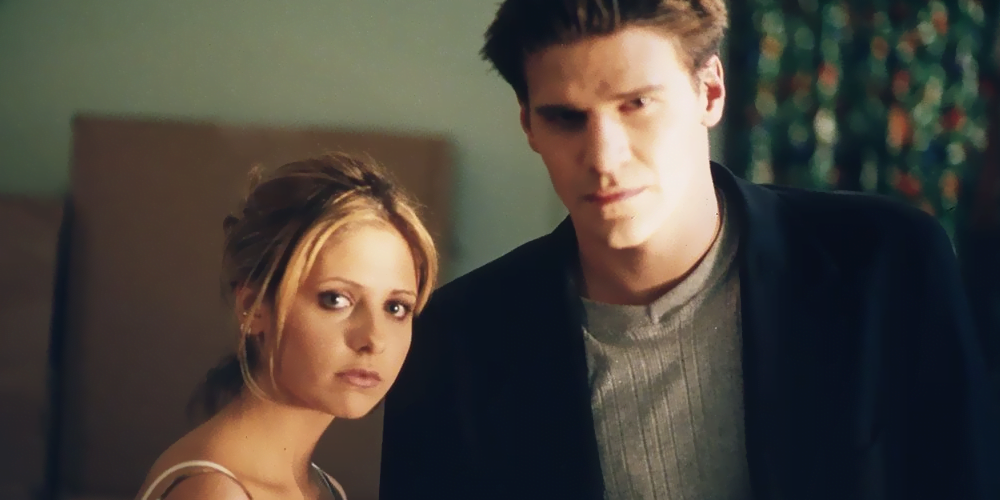 First up, the first Enemy With Benefits presented is Angel. Except he’s also not an Enemy with Benefits. Rather, Angel is presented as a villain whose tragic fall into villainy is meant to make him an even more terrible figure. After all, Buffy liked him, and then it turned out that he was in fact, potentially, cursed and evil and if he ever got happy, then he would wind up turning evil, a maneuver known as the ‘Proto-Destiel.’

Angel sucks as an enemy with benefits, because first, he and Buffy never had any thing going on when they were actually in opposition. It was much more of a sort of binary thing; they were interested in one another, then they shacked up, and then he became evil, which gets you that puritanical ‘Well, you woman, you went and unbottled evil with your hormones and your wanting things.’

And when they did drive out the evil (or stuff in the soul), Angel goes back to being… uh.

Well, like, Angel as a character kinda bores me in hindsight? He’s a dude wrapped up in his own despair and there’s basically this big metaphysic of the world set up to tell you hey, it’s so hard to cope with being distressed by the idea of acting morally.

That’s life, Angel! Every human has that! We all learn how to do it ya weirdo! 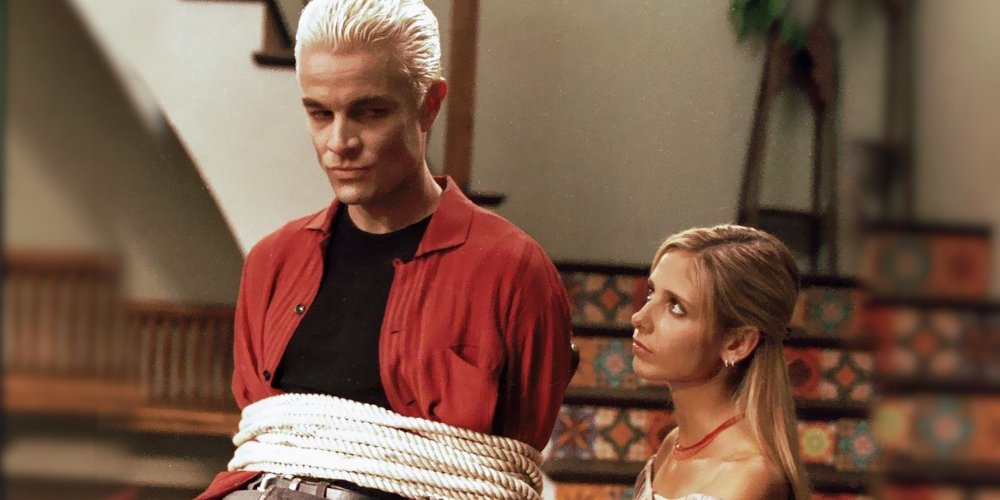 Then there’s next up, Spike. This could almost work, because Spike is funny and charismatic enough, played by James Marsters in a role before Dragonball Evolution made him famous. Spike is opposed to Buffy, because he’s a vampire and she’s a vampire hunter. He’s kept from being too bad by a chip in his head, which means they’re still antagonistic, and he is against her, but their relationship is complicated by the interest in one another.

There is the question that in this universe, is Spike irredeemable because he eats people? And like, maybe? This is a universe where people are shown as bouncing back from that, and Buffy is a serial killer (just of a predator species on humanity). It’s a universe where there’s a moral fight between two factors, and demons exist and – it’s complicated and there are actual like material evils and things like that, so it’s kinda hard to say. Personally, I don’t think Spike is forgiveable, but also, he doesn’t ask for forgiveness, and nor is he ever shown as trying to make good to his actual victims as best he can.

Spike sucks, however, as an Enemy with Benefits, because this story isn’t really about what they want, as the forces they both serve work against one another. It’s instead that Spike wants to harm Buffy (at first) and he can’t, and then he has a change of heart, but Buffy prolongs the relationship as a form of self harm. 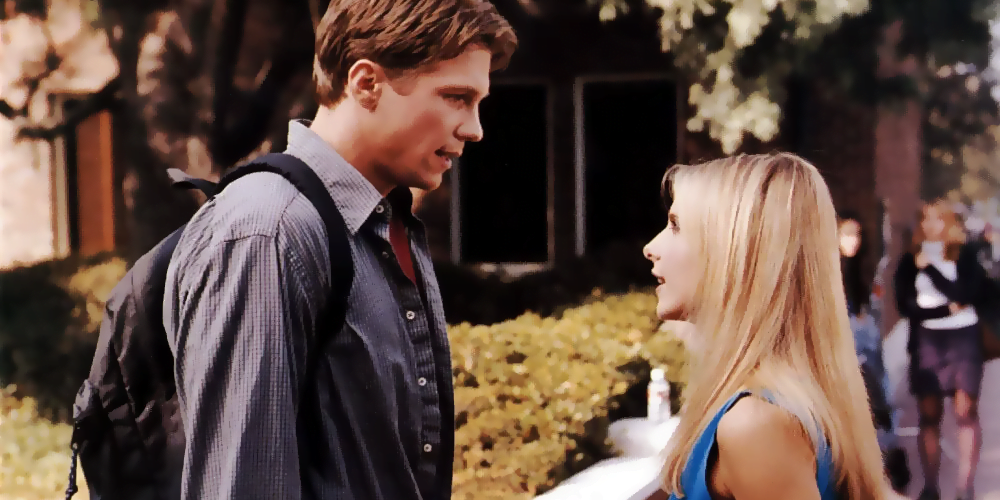 But let’s not forget Riley, the side of a Milk Carton. Riley, you might imagine, fits a bunch of these categories. After all, there’s a lot of the building blocks there. He’s positioned about the level of Buffy for power, so they’re a meaningful threat to one another, and he’s part of an organisation that at least seems on the level but then turns against Buffy, so there’s a space for the relationship to have a footing, but then turn into Enemies With Benefits after the organisation turns on Buffy. There’s potential there, right?

But they didn’t do it, and what’s more, even if they did, there’s a big problem, and that problem is Riley.

Riley is boring and what about Riley that isn’t boring is something that makes him suck. Like, when we get insights into Riley’s inner life, it’s stuff that underscores that he’s an awful person – he’s afraid of Buffy being stronger than him and he’s jealous of her attention and time.

Also, part of how Enemies With Benefits works is want overwhelming sense, and I have a hard time believing anyone wants Riley. Like the series made it a plot point for several episodes and I still don’t believe it. 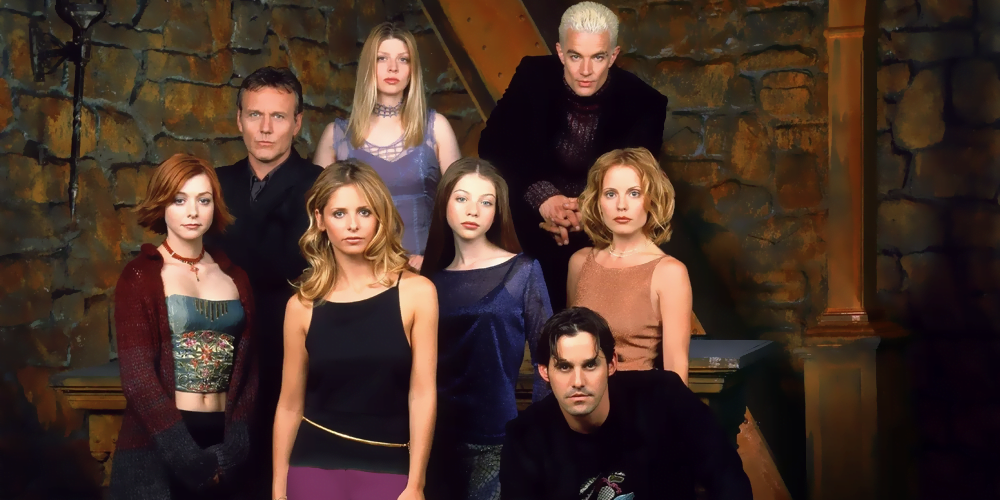 Now look, I don’t know if you love this series. I watched lots of it. I watched it weekly, when it was screening. My family taped it, and I rewatched episodes of it, like, get this, we’d have a tape that was ‘The Buffy tape’ and we’d record a few weeks of episodes, then when I was on my own at home alone, I’d rewatch three or four episodes. I wrote fanfiction about it. I wrote crossover fanfiction about it, and yes, I did involve Ranma 1/2 and oh no there’s another mention, heck.

Thing is, at the time, I was in to Buffy. I probably ran around in the yard playing let’s pretend on my own as a ‘Buffy’ story. I don’t remember any, but I probably had Buffy OCs. It’s probably lots of fun to rewatch individual episodes, and I bet there’d be a great, vibrant fandom who could help you guide through the best parts of the series.

And that means that right now, that fandom, that ongoing, sustaining reaction that can resuscitate and carry forwards this series, that can reinvent this creative space, this shared cultural context forwards, is probably irreparably damaged, maybe even destroyed. And that means that all that really gets to hang around, what gets to endure is the stories we can remember with the somber recognition that oh yeah, this guy sucks.

I can understand that want, a want to resuscitate Buffy. I know that I say that you that what you love, made by bad people, is gold, stolen from dragons. Really, what’s important in these moments is that the destruction of a fandom, the harm caused by the social poison of a bad creator, is that it means it’s harder to talk about it, it’s harder to share that fandom in the space of hey, I know this guy sucks, but I want to talk about Faith’s dialogue.

What we’re left with is the stuff that we remember and hold. What lasts.

And it’s easy to remember the things he did that suck.