Curious what you think of the permeability of shonen anime into the general consciousness, as seen in Everyone Making BNHA OCs. – Casey

First things first shonen anime is and has been part of the general consciousness for about thirty years now. My dad knows who Tobor the 8 Man was even if he didn’t, at the time know it was Anime, and Astro Boy is an institution world-wide. What’s more Goku, from Dragonball Z has the cultural cachet of Superman, which puts their general awareness in public attention around about the same level of, literally, Jesus Christ.

That said, there is something interesting about Boku No Hero Academia, a name that I feel it’d be a bit tired to make fun of at this point, and how it relates to Everyone Making BNHA OCs. Specifically, the thing that’s interesting isn’t that Everyone Is Making BNHA OCs…

OCs are a really interestingly contentious part of culture. For a start, all creative characters both have them and don’t – the nature of all creative culture as a gigantic remix machine where things we experience become part of the things we create and how it’s all part of this greater framework generation and what we see as originality is really a shift in perspectives or a paradigmatic repositioning and oh god you’re falling asleep – but the other thing is, OCs are seen almost inextricably as embarassing. We use the joke ‘OC, do not steal’ as an inherent joke to describe something people shouldn’t care about, where the speaker is meant to care very much. The Sonic OC is a whole psychosexual bazaar at this point, something most people observe from the outside and awkwardly step around.

Fanart is an interesting mill of media where people often have very one-sided relationships with the work; they do not care about the artist and their opinions or input as much as they care about the other media work the artist invokes. Artists can use fanart as a stepping stone but there is a lot more fanart that goes nowhere than anything else, and the nature of the decontextualising internet means it’s often appreciated by people who have basically no connection to the artist, because they have connection to the media it flows from. Typically speaking, fanart is not a space to get creative – if there’s a character in a lineup from a show that didn’t come from the show, people will almost always see them as not appropriate. 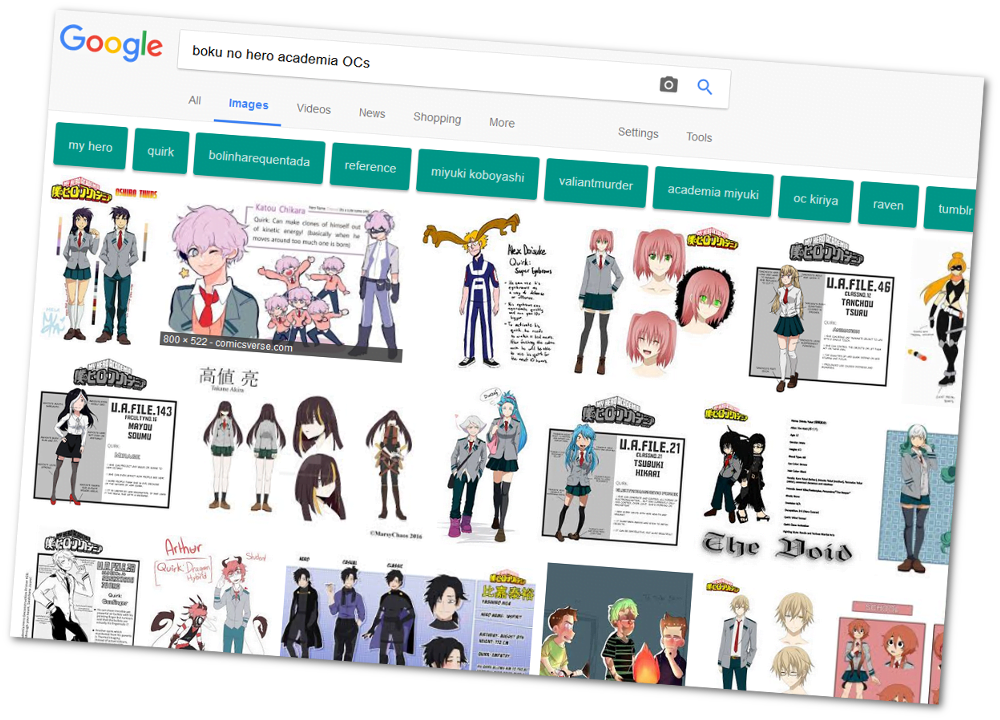 Yet, BNHA has this strange phenomenon where people aren’t just making OCs for it, they’re also comfortable labelling them as such, sharing them, and then, within the framework of the series, using those characters to make fanart of the series. Here, check out this character, who I’m using to show off the way that powers in this really weird and interesting and cool universe could work out!

I don’t think BNHA is uniquely suited for this; you could have seen the same thing back in Ranma 1/2’s heyday, where characters all had ridiculous martial arts and possibly their own ridiculous magical spring. Heck, there was a ten year long roleplay thread on a newsgroup called GRIT that was just about people’s Ranma 1/2 OCs (at first – it spiralled off, as anything would).

What I find more interesting – what I find exciting – is that we’re at a point now where showing off your BNHA OC isn’t seen as inherently ridiculous. We’re reaching a place where when people say I care about this thing, and here is my inclusion in it, nobody says get that out of here. There is a welcoming in this concept space, and…

well, I find that exciting. I wonder how much stuff I’d love better, how much better I’d be at some things if I didn’t feel I was constantly being told I wasn’t good enough.