I talked about this podcast a long time ago – back in 2015 when it was reasonably new. At the time I’m writing this, the podcast has been shut down since July 2019, meaning that there’s about four years of content, spread across 35 episodes that cover a range of the history of the WCW (World Championship Wrestling).

The WCW is a wrestling company, which means it’s obviously actually fanciful nonsense, and it fell apart and failed, Unlike most other ridiculous Wrestling folly, where analysis is a sort of moving target, doing a crime scene investigation on a hit-and-run in progress, the story of WCW is instead an autopsy, where the subject lays sprawled out. What’s more, the hosts are people who didn’t just read up what happened when the event was over, nor are they industry insiders who lived their way through the whole fiasco and have their stories to tell about how they were treated.

Instead, this is an exercise in dismantling their own past, the media that was presented to them, as they reach inside the black box of history, and see what makes it scream. 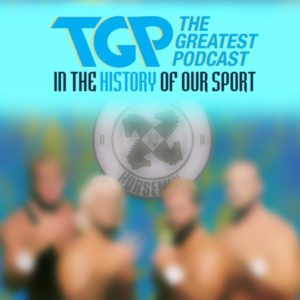 I was listening to it, more or less, as it was being released, and then, late in 2019, I pulled it out and listened to it again, knowing I missed a bunch of episodes, and vaguely aware that I hadn’t heard about it launching new episodes in a while. I wasn’t going to really say anything about it, at first, because I know many projects are set aside for a number of reasons, and that the people who made it may not be happy with how it ended or that it ended or whatever.

But this project, the story you get out of these episodes is fun; it’s funny; it’s heartfelt in both how it loves this media form and the period of history it examines. It’s fascinating in that it’s very rare to see an expensive business collapse and fail as a function of its own honest-to-god hubris. And it’s an interesting examination of a cultural space that seems to be deliberately retrograde continually setting itself on fire.

Check it out, I liked it a lot and I hope you will too.