Two years in a row now I’ve been offering roundups of ASMRtists I listen to. It’s Summer now, and does that mean I need more careful help fighting off the way the weather makes me feel so I can calm down and sleep? Well, sure does.

In September this year, this article about the overwhelming whiteness of ASMR culture was published on Huffington Post. At the time, I didn’t have much to say about it, because the problem looks different to me than to the people involved. Particularly, in my experience, ASMRtists are things where my moods and needs shift around a lot. There are some artists who are a sometimes food; some artists where I’ll watch one video over and over again; some artists whose work I like but I still only partake on it irregularly, and some artists where I only follow particular plotlines.

Yes, there are plotlines.

The article is right, though, there’s definitely a bias in ASMR videos that get randomly promoted by Youtube towards whiteness. It also is biased heavily towards promoting women, particularly photogenic women, and it’s biased towards women with active update schedules and online presences that can be interconnected. Lots of successful ASMRtists are doing three hour-long uploads a week, many have existing instagram or off-site video services. There’s lots of Replicating Privilege structures. 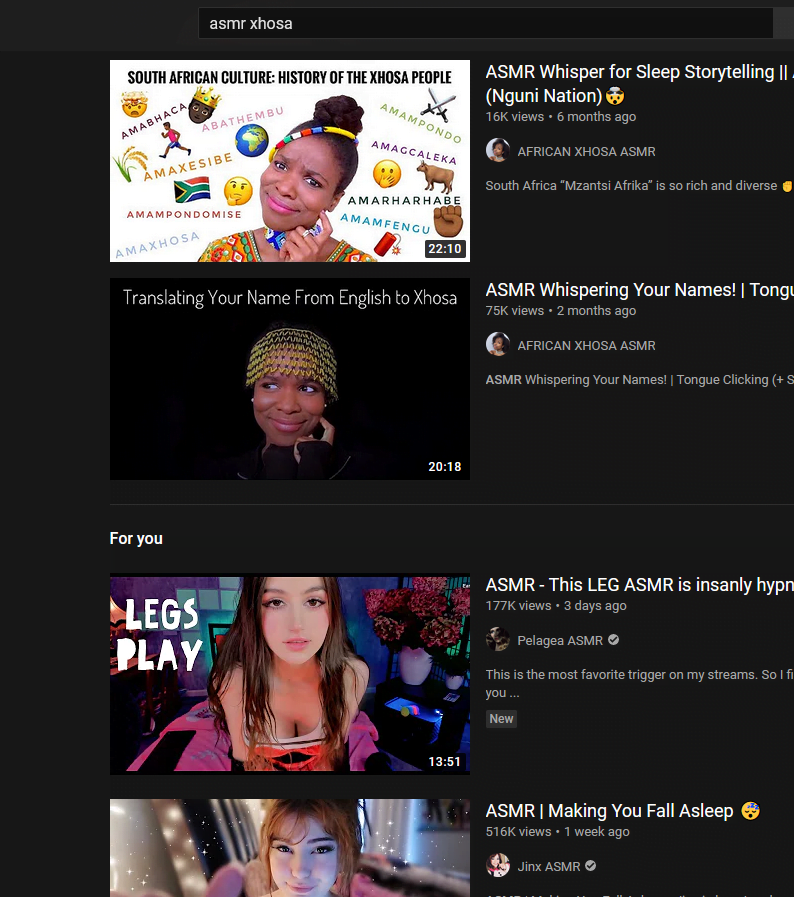 Here, for example, is a screenshot of what happened on Youtube when I searched for ‘ASMR Xhosa’. When it ran out of suggestions from AFRICAN XHOSA ASMR, the first suggestions were well-established, verified, extremely white-looking, conventionally photogenic ladies. The Youtube Algorithm isn’t doing anyone any favours on this front.

There were two bummers for me about this, though. One, it sucks that this space hasn’t done anything to push back against the existing problem. Two, it sucks a little bit more for me that I can’t help much about it, because I’d seen a lot of the black artists the article puts forwards and I don’t like what they do. That sucks, because I’d love to be able to add to that momentum – hey, friends who read this article, here are some good suggestions all rounded up, etcetera.

So, I went to my subscriptions and here’s a roundup of ASMRtists I have subscribed to, who Aren’t More White Folks.

ASMR Power Of Sound: I know I mentioned this guy last year. He’s still more or less the same, and he does do some ‘negative energy’ stuff and chiropractic stuff, whatever. I do like his work, and I’ve been listening to him consistently in the remaining year. There are some weird things, to me – he’s done ‘homeless man ASMR’ and a few of his plotlines veer into dark places suddenly and surprisingly, so it can be a bit much if you’re fragile.

ASMR PPOMO: I always feel nervous recommending ASMR channels in languages I don’t speak. Like, I don’t know, this person might be a total shitbird. But this channel has lots of those long-form, sound-variety stuff.

ANNURA’S ASMR: Annura arranged a big collaboration amongst other black ASMRtists to do a big compilation, a ‘try all our stuff’ video. It wasn’t to my tastes, and neither was Annura’s stuff in general (I’m just not one for your fast-flickers, really). But, she also made this video, which on its own, I find very useful for concentrating, but also: It’s really funny. Like, the video itself is just really witty.

NEFERTITI ASMR: I am nervous about this one, because the videos from this channel I’ve seen have been in French, which I don’t speak. I’ve watched a few of these videos and found them very nice in that kind of ‘sound with texture’ that I like. Props are very elaborate, whole process is very calming.

WILDHEART ASMR: Jamaican-centred ASMR, with videos themed around Jamaican culture. I like language lists, so those videos are great for my needs.

SE-YA ASMR: Language barrier problem again: for all I know this guy is recommending you stop watching anime and have babies. But I liked his fan videos and his doctor stuff has been a nice background for studying time.

So yeah! There are some recommendations!