Regarded largely as a modern classic, Beyond Good And Evil is one of those games along with Psychonauts that it launched on the overwhelmingly busy Gamecube and PS2 marketplaces, didn’t stand out in that attention economy because at the time, games journalism was still really difficult, and only a few years later, after its window for impact was past, people picked it up, noticed that it was phenomenal, and we ended up with a modern classic. Still, classic games get to be exulted the same way classic literature and classic medicine does, with an understanding that maybe being good for its time is not the same thing as always going to be good.

There’s a certain risk of rhapsodic enshrinement with games like this, where a game transitions from unknown to classic and we miss a chance to talk about what in the game is interesting or cool. And what with a trailer for Beyond Good And Evil 2 launched last year (again), I figured the time was ripe (several months ago) to replay and talk about Beyond Good And Evil.

One of the things that makes Beyond Good And Evil so excellent is sort an interesting accident – it’s got really robust, flexible gameplay that doesn’t need to spend a lot of time re-teaching you what it’s doing.

It’s one of your context-button games, where you have a button for ‘act on this’ and another button for ‘hurt this,’ the latter being useful for a whole host of different things. It’s stealth kills, it’s normal combat maneuvers, it’s activating switches, it solves the occasional puzzle and yeah, it sometimes is breaking pottery for currency. The other button is your all-purpose fiddle-faddle button, which means the game is mostly about moving Jade around and trying to find the right sequence of things to fiddle-faddle with.

It’s a pretty simple structure, and it uses this control scheme for pretty much everything. One of the advantages of this kind of system is it lets you change the player avatar without doing much to change the player character – when Jade gets into a hovercraft, it moves around a lot like how Jade moves around. When Jade is sneaking and stealthing, she moves pretty much the same way as when she’s running away from a wall of fire. When you do a lot of gameplay style shifts, having a really consistant control mechanism is really desireable. 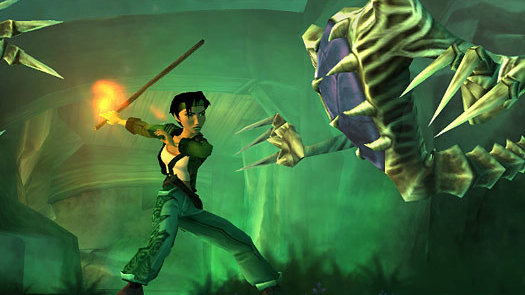 When the control mechanism lets you shift effortlessly, you can shift the gameplay into a lot of different modes. When you can mix up the gameplay modes, you can create novelty, opportunities for lots of different things to do, and that variety invites space to put them in. And so Beyond Good And Evil gives you a wide platter of Easily Consumed stuff. It’s a good context to make a game that is both easy to play and easy to keep playing.

One of the comparisons people draw is a Legend of Zelda game, and while that’s not inappropriate, one underserved description of Beyond Good And Evil is as a collect-em-up game. Something more akin to your Banjo Kazooies than your Ocarinas of Time, the game fills its world with a huge variety of bits and pieces for you to collect. There are animals to photograph, there’s rare currencies to collect, there’s health sets and the gameplay switches give you the subtle hint that if you haven’t found anything doing this, maybe you’re not looking hard enough.

This doesn’t introduce anything, really; the gameplay is just generally, formula-found good and robust play. It isn’t like Psychonauts where the gameplay is a bit rubbish and the camera occasionally goes to hell (though the BG&E camera is by no means perfect). Instead, you get almost perfect Gameplay Loaf. Functional, Compliant With The Model, and very Seven Out Of Ten.

Often when there’s a game with robust gameplay that manages to vault up to the position of classic, there’s something else going on. Games like Psychonauts hold up a funny, quirky set of gameplay modes, basically trading on theme what they lack on the initial interaction.

The thing that’s kind of weird about Beyond Good And Evil is that it doesn’t really have a clear through-line of a theme, or rather, what through-line it has is sort of accidentally there.

The plot of Beyond Good And Evil isn’t strong. It’s kind of pulpy and if I was being mean, I might call it generic. There’s an alien invasion, there’s a conspiracy relating to that invasion, a corrupt government is secretly responsible for that conspiracy, except the aliens are part of that conspiracy and it’s all kinda just a train wreck of a system with a big end-game reveal that if you’re like me you respond with a laugh and say ‘yeah, what?’ 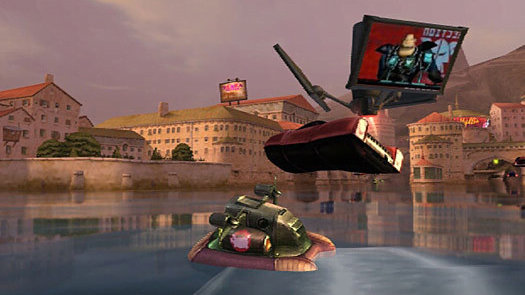 The name of the game plays into that, in that it doesn’t at all. The origin point for the quote, for anyone not already familiar, is a quote from Nietzsche, and indeed, the title of one of his books: Beyond Good And Evil: Prelude to a Philosophy of the Future. The most pertinent quote people tend to extract is What is done in the name of love is done beyond good and evil. This builds on the thesis in the work Niezsche offered that moral systems putting good and evil in opposition to one another are sort of mistaking the impulses and intentions at the root of actions. Things done in the name of love – sincerely – are things that cannot be judged by simply being termed as ‘good’ and ‘evil’ and all such paradigms of good and evil are more about the willingness of ‘evil’ to express its wants directly. Then it goes off into the weeds and starts on a moral framework that suggests hey, maybe slavery and racial purges aren’t the worst thing in the world, and we all put the book down and look at the camera like we’re in the Office.

Are you wondering how this theme plays out in the game?

There is no followup on that title in the story; nobody can point to their actions and say I did it in the name of love or your motivation and my motivation are the same, and the closest you can get ties into that aforementioned ‘Wait, what?’ moment I laughed at earlier. The story of Beyond Good And Evil is therefore largely unrelated to its name, which sort of disconnects it from any greater narrative arc.

What you’re left to do then is to look at the game you get, and try to find what the people making it did mean. What kind of things keep happening, what kind of story do you discover? What are the values of Jade and her friends? Doing this, you might come up with a different set than I do, but I have something of an idea. 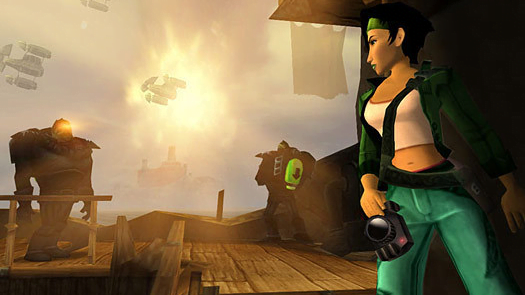 Jade is a mom. Not a mother; there is nothing rhapsodic about wombs and birth here, no enshrinement of the process of birth, and her kids are by definition not kids she could have. She’s a mom – the person who gets lunches ready and helps hurts and keeps the kids safe and does yoga in the morning with one of her kids. Jade is the emotional reserve for her big adopted family.

Jade is a fighter. Her daily routine includes martial arts exercise, and when she’s attacked, her literal first response is to run towards fighting. When Pey’j rescues her, he does not do so by shooting her enemies or attacking them himself, he throws her a weapon.

Jade is a journalist. She finances herself by investigating things, by showing that simply knowing things is important.

Jade is a criminal. Or at least, she associates with criminals freely. The world of Hyllis is full of probably-crooks, ramshackle junkyard people who do what they can to get by. The government of the system is corrupt, and Jade aids and works with the rebels – thanks in part to the power of the press, and also the healing power of hitting enemies with sticks.

Jade cares about the environment! The game rewards you for taking your time to look around and find animals and plants and take cool photos of them. Jade exists in a world full of things that have nothing to do with you, and invites you to spend your time contemplating them and caring about whether or not you recognise them.

All this comes together to form a central character who carries the story in a way that the plot doesn’t. And that character is someone it’s not hard to like, her aims and goals are believable and respectable, and it’s very easy to want to see her succeed. Without any kind of coherent, thoughtful motivation behind the story you’re left paying attention to what Jade wants to do, and Jade is sort of the actualisation of what Alex Vance would be if she wasn’t tied to the agency of someone boring.

I feel personally that the message of Beyond Good And Evil is sort of contained in its title, albeit in a completely confused way.

It’s a work of love.

It’s available on Steam and GoG and if you’re on the platforms, there are HD versions on XBL and PSN.