Not all hells are hot. Oranbegans, for example, knew of a hell that was frozen, an intense jagged land of ice and pain, numbing and biting. It’s the home of the hellfrosts, and shards of that frozen hell extrude through the power of the gods to this world.

We all get our power from somewhere. There’s a title, long since handed down, a title designed to sap even the tiniest power from the name of the beast that wore it once, slumbering deep beneath a trap of ice and water. Nightmares of the old sea, the dark and dreaming deep, all woven together, in the name of the Xixecal.

And every spell he casts is sapping the strength of a dreadful beast that can never be permitted to awaken.

Xixecal is very much your classic mage of a character. While there are a host of things he can do easily and familiarly, most of the things he does are spells that he casts; there’s a channel of magic, there’s an incantation, there’s a release of the spell. It’s a very classic spellcaster style, but it’s not Vancian – not in the way of building spells and having ‘slots’ available. It’s a literal encyclopedic list of spells he can cast at any time.

The spells he can cast are based on their difficulty to, as it were, ‘hold’ in his head, to ‘maintain’ in his body and his ability to channel that energy. That means that for Xixecal, the magic he knows, is the magic that comes easily to his mind. Larger, more complicated spells are very draining, and can’t be used regularly; and some of them need to include reference material, like spells. It’s not as simple as ‘recite the magical words, anyone can fire this spell,’ but it’s a lot like building an engine out of a diagram – if you describe it, you’re describing something like it.

Also, crucially, magic as Xixecal presents it, is a skill. People learn it, people forget it, practicing it makes you better at it. Mages are not ‘born’ mages, and they are not ‘chosen’ like it’s Hogwarts. You can have an aptitude for magic, but it’s like how you can have an aptitude for mechanical engineering, and if you never get the foundational work for becoming a mechanical engineer, or the infrastructure required to make that skill mean something, it doesn’t matter.

The common things you’ll see Xixecal do ties into cold magic stuff; he makes barriers to protect people out of ice, surrounds himself and his allies with a cloud of fog and cold air to protect them from attacks and from being detected, and he uses this power to sap heat out of enemies which he then turns into greater magical energy, and as is the tradition of most ice mage, chucks ice at people that ostensibly damages them through sheer cold, but make no mistake, forty-kilo chunks of ice being yeeted through the air at just barely subsonic speeds is definitely a smashing damage attack.

Xixecal’s common limitation, as a mage is processing. Magic can do a lot, and magic can do things in a ‘human sensible’ way – he can for example, cast a spell that ‘freezes the cowardly’ and he doesn’t have to mechanically design the magic so he can determine what does or doesn’t count as cowardly. But that means he needs to use the spells that can come to mind, and the more complicated a spell, the bigger a spell, and he already has a limited set of spells he kind of keeps at ‘ready recall’ and practices over and over again. It’s a lot like playing music, and while he can absolutely riff off Classical Gas at a moment’s notice or the riff to Smoke on the Water, it’s another thing entirely to bust out Handel’s Water Music.

What’s more, as a supporter, he really feels he thrives when he can bring friends to bear on a problem. His powers are good at protecting himself, but they can protect others as well, and in big fights, he can use his ice to shield his friends and help them.

In a typical group situation, he’s meant to be kind of the ‘knows weird stuff’ one; the Doc Strange or the Mandrake of a group, who doesn’t operate on the same level as the other characters, but is well aware that his expertise is mostly unnecessary. Generally, he’s a little aloof and a little lighthearted; he tells jokes and makes light of how silly his particular profession of magecraft is, and he tries to not take himself as seriously as typical mages are seen to. 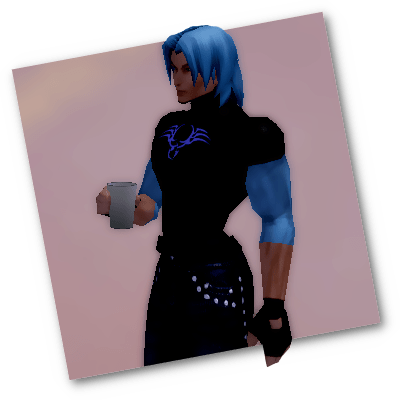 Xixecal isn’t just as simple as being ‘an ice mage,’ though. The powers he uses tap into an enormous, dreadful lovecraftian horror, a creature also known as The Xixecal. His family are practiced mages who are dedicated to a long-term task of keeping the Xixecal dead, which they do with a variety of magical rituals. Some of them involve visiting important locations and inscribing runes anew, so they do not fade. Some of them involve tapping the magic of the Xixecal’s recovering dead frame, sapping away the magic that it tries to use to come back, and crucially, using its name, so that the dreadful memory of the primordial cold, the entity that wishes to freeze all of reality, slowly slips away into something that gives hope.

Xixecal is, as with Moonheart last time, a powerhouse support hero. The server I play him on is one with a pretty healthy economy, and I have modes of play that make it easy to make Influence I like, which I guess explains why his build hits a lot of target numbers I want to. He is a Cold Domination/Ice Blast/Dark Armour defender. His laundry list looks like:

Moonheart is a lot more personally powerful and tough, but unlike Moonheart, Xixecal brings a lot of Archvillain and Giant-Monster killer abilities he can bust out in the middle of a conflict.

Xixecal started his life as a gothy crow lady called Nevermoor, which I kind of liked but I wasn’t so attached to her that I wanted to keep her. She was just kind of Generically Spooky Hot, and I didn’t have a context for what I was doing with her. Fae somethings, I dunno.

Anyway, a friend of mine, Casey, who rules, once told me that Catholic and Christian imagery looks super weird when you don’t actually already accept the things about it that it believes to be true. After all, it’s kinda grisly to keep around executed and tortured icons of your savior, and it’s equally weird for people to sit around drinking blood and eating flesh that’s meant to be of that same dude’s magically-reconstructed body until such time as he’s going to come back from the dead. That looks weird as hell.

The Xixecal itself is a horror beasty from Dungeons & Dragon’s epic level handbook, and it’s basically ‘what if a glacier, an incarnation of inhospitable climates, could get up and punch cities to death,’ and like more and more these days I’m on the glacier’s side. In his case, the thing he’s keeping under control is a thing that’s meant to be a big lifelong project.

I think it’s important to this metaphor, though that in his case, the problem of the Xixecal isn’t meant to be seen as some dreadful burden, some sacrifice that consumes him. That is, there are big, complicated problems people can work on through their lives, and even if they’re not going to fix them, they’re going to make it easier for other people, later, to fix them. The idea of using the name of the Xixecal also plays into this in my mind because I think that there are a number of problems we need to give names to, and we need people to be able to hold onto those names to be able to understand them.

Xixecal is a new character, fresh for Resurgence. There’s no pre-existing community to bolt him into, but I like him, and I’m hoping that he can hook into more groups soon.