Everyone I know has some hypothetical interest at the very least in playing a hot monster in their local tabletop game. I am willing to recognise that this is a selection bias, possibly due to the overwhelming presence of the queer monsterfuckers in my social circle, but the long and short of it is that I know people who regard the Monster Manual as less like a threat and more like Tinder.

The problem with making monstrous characters in most D&D games is that all the monsters you might want to be are gated behind a lot of rules baggage, like the hellscape of imbalanced garbage that is Savage Species back in 3rd edition. But what if in this season of spook, you want to make a monstrous character and just get rolling in my edition of choice? Here then are five spooky characters you can play from level 1 that let you get in the spirit of the season without needing to jump through a dozen hoops.

It’s something of a babymode to point out that the Warlock, as a class, is primed for horror narratives. You pledge a bit of your soul and agency to the whims of something, which by the standard rules could be something like a demon (ho hum), a thing from beyond the stars (ooo), an ancient super-ghost (hello), or the alien whims of a faerie court (finally, having a good time).

It’s not just your standard boring-ass warlock stuff, no. Because it’s one of the most tired things for DMs to try and use your patron as a ‘spooky’ button. Every Warlock makes a pact and it seems that DMs never consider what it means if you make that deal with your eyes wide open. The Warlock may well look into the Eye of Forever or the Star That Only Hates or the pitiless wants of the King Under The Mountain and say, in their heart of hearts, 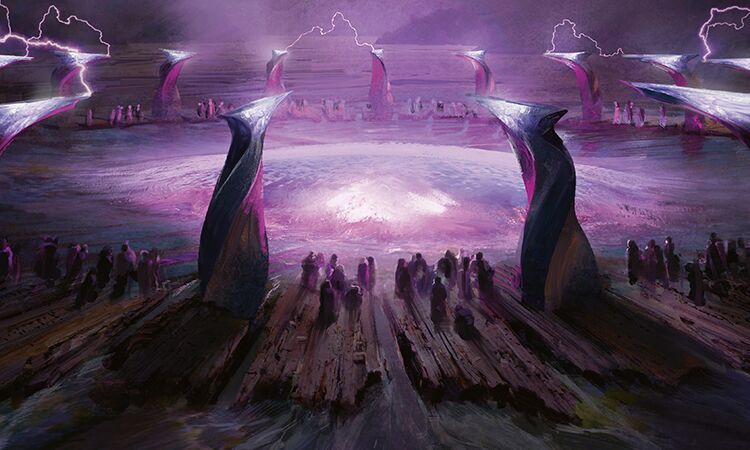 The Warlock is one of the early classes, so it gets a ton of support, and that support takes on a whole host of forms. You can make a really controlling Warlock, a really tough one, and you can even load yourself up with some really weird powers that let you play to the feeling of horror, but I find I like this class best if you treat them like your own personal tame Horror Movie monster. They do things like avoid dying, pick targets then stalk them down relentlessly, and their daily powers usually do something pretty goddamn messed up.

Want an example? At level 29, a Warlock can pick someone, and huck them out of the game until they want them back.

The power is called hurl through hell.

What? Artificer? Horrible? The artificer is normally presented by the game rules as a delightful tinkerer and turbo-nerd, making things like little deathtrap boxes that sit on the battlefield and pew at things that walk past, or, more often than not, position themselves to be as close to as many people as possible to spam their best power, Magic Weapon. 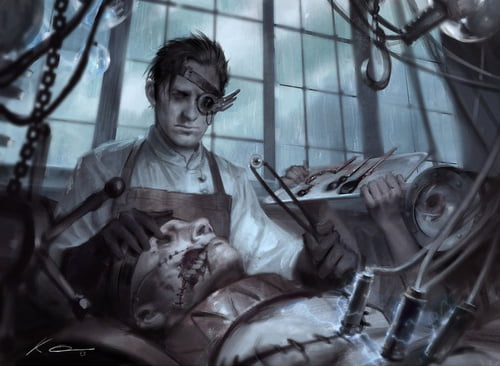 The Artificer knows what makes you tick, and they know how to make the ticking stop. They’ll keep you up, they’ll keep you alive, and all you have to do, very politely, is give up some of that blood of yours. And the Artificer doesn’t have to be spooky, but boy they do a good job at it. Want to pull out someone’s eye and make it scream? You can do that! Want to pull off your own heckadang arm and build a new one out of… components? Well, you can do that too.

The Artificer keeps its flavour very neutral, but the mechanics can live in the space of the Morally Ambiguous Doctorate if you want to and you don’t need to really do anything special to make it work that way. And speaking of things that work out of the box:

Heroes of Shadow is one of the last 4ed D&D books ever made, and it showed up with this second class that tapped the Shadow Power Source after the breathtakingly lacklustre Shadow Assassin released in Who Cares. I’ve talked about how turning up late in 4e was kinda bad for your overall chances, where the Player’s Handbook 3 classes just didn’t get as much attention or stuff as the Player’s Handbook 1 classes, and it shows with the Vampire. I have made fun of the Vampire, and will continue to do so, but, but, it’s super important to not just throw the whole thing out with the bathwater.

The Vampire is an Essentials character, so you don’t get lots of choices, but you do get to use both ki focuses and holy symbols, meaning that you have a lot of cute toys available to the Monk and the Divine classes, meaning you can optimise in that direction. You’re really tough as strikers go, even though you have vulnerability to sunlight and radiant damage and only one healing surge, because you get to do extra damage while slurping healing out of your enemies, and when you’re bloodied, you get regeneration equal to one of your most important stats. 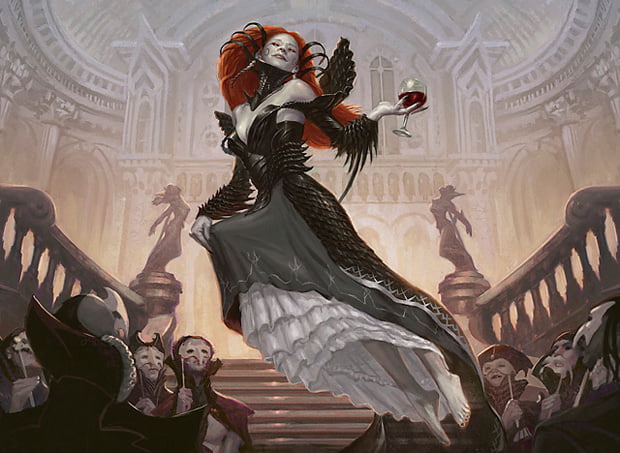 You can eat enemy’s health, but you can also eat your ally’s if they consent, which creates a wonderful story beat where after the fighting’s done and the Vampire is wiping the blood of foes off themself, you can have a character building moment where the Paladin or Cleric or Druid narrows their eyes and shares life with them because they are friends, and I love that to bits.

Also, and I can’t overstate this enough, they nail the flavour of the Vampire’s powers. At level 1 you can bewitch people’s minds, dragging them towards you, drink their blood, strike so hard they go flying and explode in a cloud of bats. Normally that’s a raft of stuff that you’d need to spend a bunch of choices to get but the Vampire just starts out feeling incredibly vampirey.

It is a bit weak, it is a class you’re never going to top the charts with, but if you want to walk onto the battlefield and feel like a monster the Vampire is exceptional. If you’re a mechanical min-maxer, you’ll be digging through a much shallower vein of Bullshit To Be Back On, but it’s not nothing. I recommend checking out what you can do with the monk ki foci on a character whose at-wills include a push and a pull.

What, am I the only one who finds these things bloody horrible? These wee little beasties from the Heroes of the Feywild expansion get to pack a lot of things that feel like a pixie right out of the box, but they’re still designed to plug into the rest of the systems other races do, and that means that you deal with a creature the size of your hand in the real world that can pick up any melee damage dealer class (like the Vampire!) or something like the Rogue and deal almost exactly the same damage as something much bigger.

I guess the thing here is, you have to already be willing to acknowledge the way that a tiny person that can fight and move and threaten on the standards of a full sized human is really scary. The fae realms don’t make sense, not the way that the world we live in does, and that means anything from there, anything that’s truly of the fair folk is something that is only ever going to be acting like a person you can understand, and they may not always act that way well. 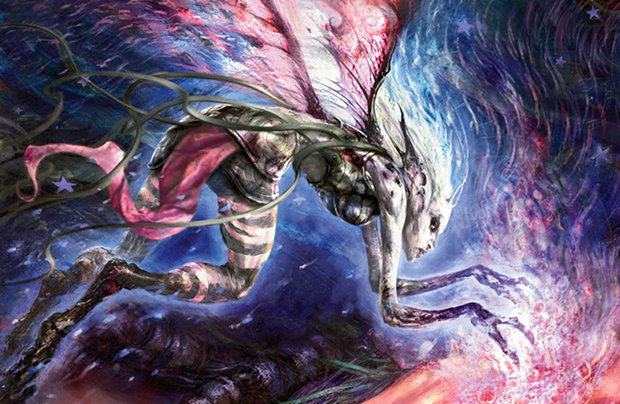 The Pixie does range, melee, and even handles tanking duties decently well, despite its small stature, and there are also all sorts of weird things you can get up to when your character can fly. You can charge people at really weird angles, which combines with a whole suite of powers and triggers, and you don’t even need to lean into a weapon if you don’t want to. Play a Pixie monk and you can dart around at head-height knocking people’s faces in with your tiny, tiny fists.

This tooth fairy’s not interested in waiting, and they’re sure not here to pay.

Now, I know there are some furries out there,

And they’re probably the kind of people who when they first started to get into fantasy adventure roleplaying, suggested ‘oo, what about a werewolf,’ or something like that. A wererat or a werebear. You were maybe told how hard it is to get a balanced werewolf, because of all the stats and the level adjustment. Maybe someone traitorous told you to play a Shifter, who are the cover band of lycanthropes.

Anyway, 4e has this slot on every character called a theme, where you add a little extra spice to a character that gives you just a few powers and things that make it a bit more clear where you came from. Most of them are interesting but unremarkable – they’re balanced so that if you never take one, you shouldn’t be seriously underpowered compared to someone who did. 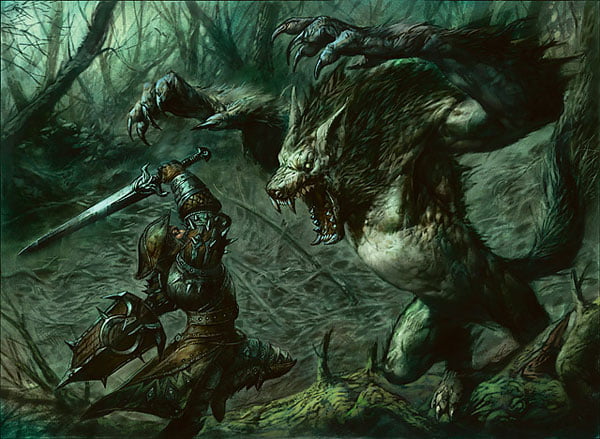 There are three Lycanthrope themes, which mean at level 1 you can play a character who’s a werewolf, or werebear, or wererat and it’ll work. You can just turn into a bear or a wolf or whatever, and you can use this to get a little bit of combat spice (like the Bear gets to dole out a mark!). It even has some exciting mechanical applications in the later game, when most themes drop off in effectiveness – after level 10, you can live in a hybrid, half-animal, half-human form, and then you get to apply ‘beast’ rules to all your melee attacks  you make in your non-beast form.

There’s some bullshit you can do with that, let me tell you.

But the most important thing to me is that when you start the game with the idea of playing a werewolf or a werebear, a monster hiding in the skin of an otherwise unassuming person, you can just do that and it’s not gated behind walls of nonsense. You pick it, you play it, you go for it.

There’s five ideas, with art supplied from Magic The Gathering, about horrifying ass heroes you can bring to the table for your next 4e game. They work at any level, they hit the ground running, and they all feel as horrifying as you let them be.