Tomorrow Magic: The Gathering – Adventures in the Forgotten Realms will drop on MTG Arena and MTGO. I’m not excited for its release – in fact, at this point when I’m writing this, my initial active resistance to the idea has turned into full-blown antipathy. Simply put: I think this is a bad idea, root and branch.

I don’t mean in that pontificating way of ‘wizards should do this for the good of the game.’ That kind of heavy handed rhetoric involves a vision of the future that feels like climbing mount cleverest. It’s the same mindset that calls for bannings on day one, where your ability to prognosticate about the future of the game is some kind of skill you want to demonstrate. Don’t get me wrong, some people can do that – Pat Chapin was calling Jace overpowered real early, but let’s presume we’re not talking about Hall Of Famer big brain Mike Flores’ Best Friend Pat Chapin.

It’s not like I’m not going to try some of these cards, or even play with them. It’s more that while I may have had interest in trying standard again with the release of a new standard set, that interest dissolved as this set was revealed. I’m more likely to sit things out, because I don’t like this set.

Why don’t I like this set? Especially since I haven’t played with any cards in it? 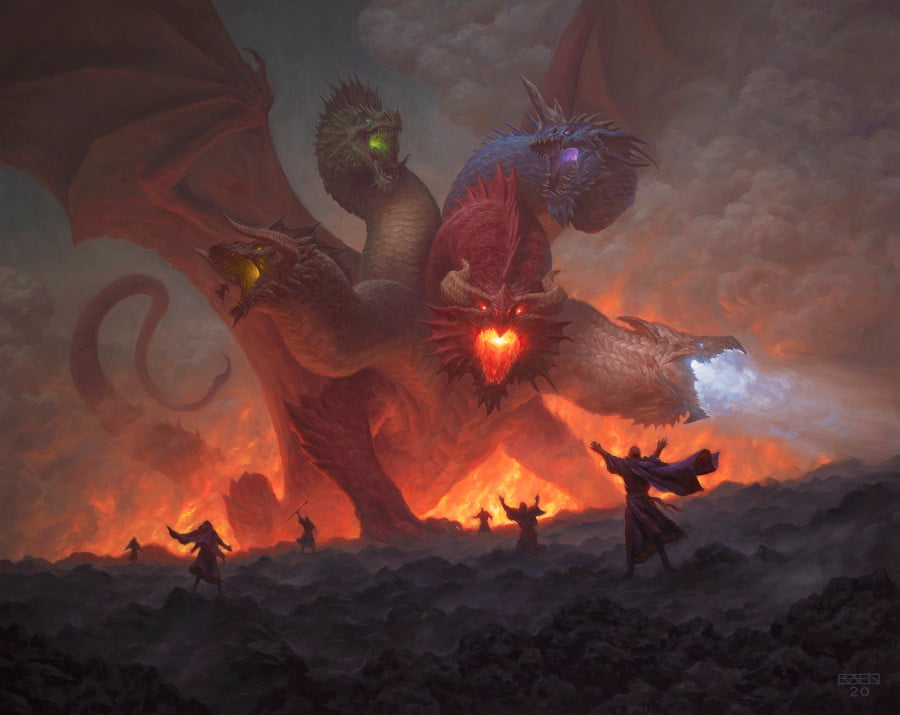 The Forgotten Realms as a setting is garbage. I’ve been playing D&D since early 2001, and in that time, literally never has the Forgotten Realms made itself more interesting. Created by Ed Greenwood in 1967 and fuelled by every single idea that he’s ever had in an ever percolating mess of self-replicating concept cells, the Forgotten Realms operate as a series of photocopies of itself as a sort of narrative cancer. Every single place you go, eventually, you will find an old man, who is secretly super important to the operation of the good people in this space, and he’s inevitably some form of wizard, not a sorcerer, and he’s also probably just a complete chode as well. But don’t worry, despite that gruff and unlikable exterior, he’s actually secretly super hot, and some apprentices or rivals or villains or actual literal goddesses totally wanna polish his rod of lordly might.

When you remember that most of these characters are templated off Ed Greenwood, the ways they’re all similar make a lot more sense. And then when you realise how much about their sex lives is clearly thought about and part of the novels, you realise that the whole world is clammy with this sort of all-purpose moistness. You stroll through the enchanted piss forest of one of the most long-established piss wizards in the world.

But okay, set that aside, because honestly, you can forget it. A good Forgotten Realms story wants to make sure it has literally nothing to do with any of these old wizard NPCs that are soooo fucking important. What else is going on in this world?

Well, there’s an entire country of evil red slaver mages that run a fascist dictatorship. Could have some fun killing the shit out of that. Except they exist because the goddess of magic (who is boning one of those wizards) lets them. So that’s not comfortable.

Could go down into the underdark to fight the evil drow empire of people with dark skin who are inherently evil because they worship an evil lady spider in ways that aren’t… deeply conflicted and weird.

Look, this is a world that has been produced in an ongoing sequence for longer than my entire life and half again and change. Every part of this world that could be interesting has been done and redone and redone again, and my time in the tank researching it shows some really ugly ideas at the root.

I don’t know why people love this world. I accept that they do, but it is so fundamentally generic and full of so many awful things, I can’t see what it is that people connect to when they could strip it down for parts, and take all the things they like and wander off with them to a world that doesn’t smell of old men’s balls.

This is the Tomb of Annihilation card: 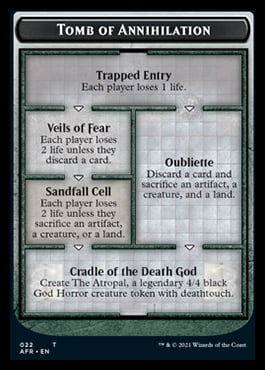 At the end of doing this dungeon, with all the loss and sacrifice, you will summon The Atropal, a 4/4 legendary horror with deathtouch.

Well this is an Atropal. 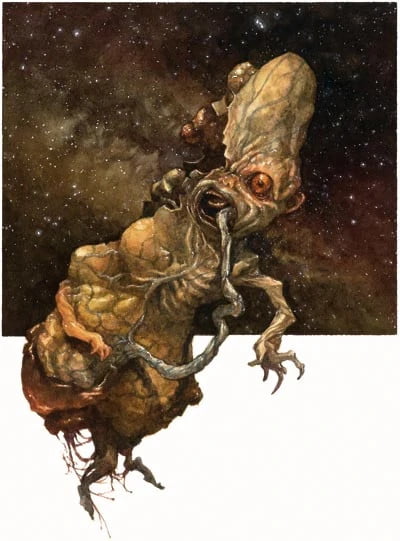 An Atropal is a stillborn god. Introduced in 3rd edition’s Epic Level Handbook, an Atropal is a type of Abomination – some sort of thing that has essential statuses of godhood. Depending on the edition, an Atropal has an aura around it, which either imposes ruinous damage on living creatures and healing undead, or even creating hordes of undead in an area around it. Atropal regenerate and heal themselves endlessly. They can cast spells, and do huge devastating area damage attacks.

This is your reward for enduring the dungeon. It’s legendary. It’s a 4/4 deathtoucher.

Now, this makes some sense, if you want it to. After all, an Atropal is a final boss at the end of the Tomb of Annihilation (depending on the version). In 5e, it’s apparently no longer the epic-tier threat, with a challenge rating of 13, which means the idea of a still born undead god is now … a mid-tier threat. None of this has to be a huge problem.

But by putting The Atropal in this space, like this, you have invited the comparison. Even in your own space: The Atropal is a legendary creature that compares in size and threat to an Owlbear, a creature that you’ll see as a challenge in your early-mid heroic career. An owlbear is essentially, a big tough beast. And here, it’s being compared to an Atropal, in the most direct way.

That’s not all of it, of course. There’s other stuff, all sorts of places where obvious rules of Magic get weird because of their relationship to the rules of D&D. Why don’t Beholders fly? Beholders can fly. Why is the Illithid card completely unlike an Illithid (Grazilaxx, Illithid Scholar at the time of writing)? Why is an adult gold dragon, a thinking spellcasting creature with plans and designs and magical abilities, just a big flying lifelinker that can die to a bevy of one-mana spells? Why do, again, all these things lose in fights to owlbears, a creature that is in its truest sense a big wild beast that doesn’t have anything like that going on?

I mean, I know why the card is like that.

It has to be like that, for good Magic gameplay. But the result is that now you’re asking me to look at these important creatures that I have, in other games, stood before and looked up to with awe, and turned them into very simple, very generic, very boring game pieces. Because you’re not telling a new story or bringing me in to a Magic world – you’re using Magic to represent something I know better than this.

Every good idea in this set, like the dungeon cards, could have been put in Zendikar, which already did the job. In fact, Zendikar is a world that has been visited in six different sets, and despite being an absolute fan favourite, has had a total of one set that doesn’t come with a massive asterisk of ‘okay, let’s not fuck up like that again.’

This set is full of mechanics that are meant to evoke D&D style adventure. Parties and treasures and quests and dungeons and levelling up. The world has that stuff going on. 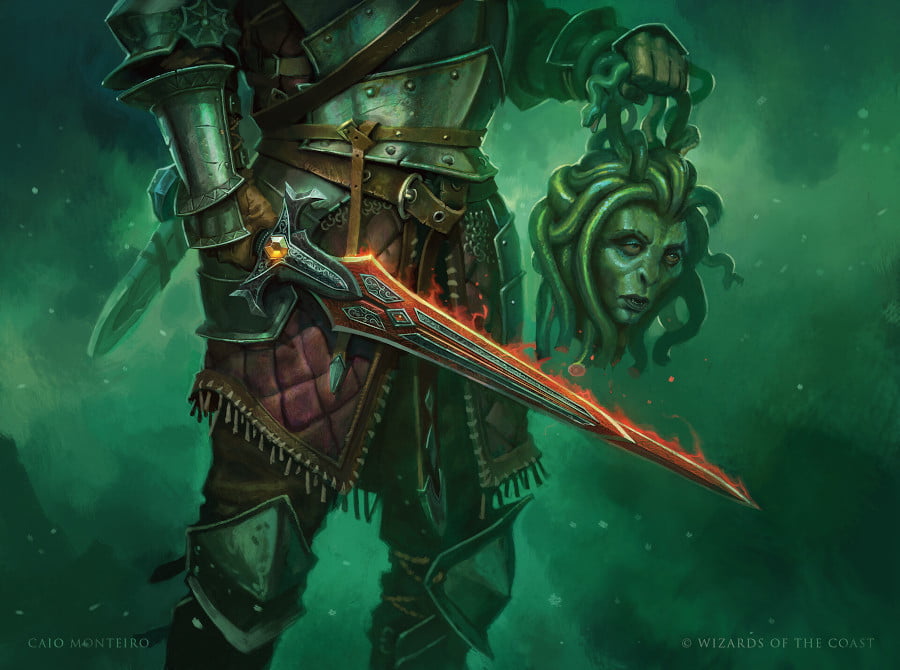 But instead of using these ideas here and making them Magic style sets, we instead get the awful Forgotten Realms stuffed into a Magic set, which brings with it all its baggage, casts a range of official brand identity things as just another arrangement of crap creatures and draft chaff.

Forgotten Realms adds nothing to Magic that Magic couldn’t do on its own. And now our pool is permanently pissed in, again.

Now to clarify, what I mean when I say ‘I think this is a bad idea’ is I don’t like it. That’s the extent of it. I actually expect this will be a popular set and I expect it’ll sell really well and maybe even lean on the door to do it again. I hope it doesn’t. I’m in the rare position where I find myself hoping that a Magic set fails in some way, which isn’t a thing I like doing.