Hey, you ever heard of this guy? Friedrich Wilhelm von Steuben?

You might have seen some stuff with his name on it, around the right area of America. Dude was considered pretty important, because of his contribution to the Revolutionary War. Part of it was his commanding particular units in this sortie or whatever, but the big thing he brought to bear was some ideas for the whole military to use. These ideas included ‘training’ and ‘a field manual’ and ‘being sure people knew what orders meant.’ In a lot of ways, Steuben was responsible for bringing George Washington the basic modern technology of military hierarchy and a command structure, and essentially founded the very template of the American Military.

He was also gay as hell. 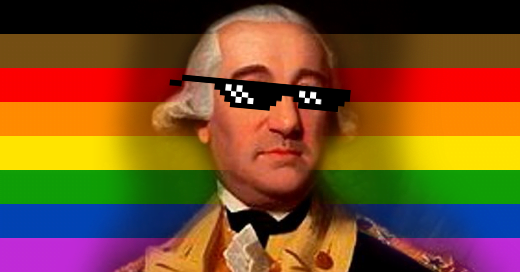 Steuben being gay is not a point of ambiguous historical interpretation, by the way. One of the things with looking into the history of the time is that often people who were gay or queer in some way or doing non-conventional gender things were all sort of put into a bucket of ‘well, maybe.’ Were these two historical dudes kissing? Was this woman who dressed and lived in men’s suits their whole life a trans man? What can we know for sure without knowing their inner lives?

Well, Steuben wrote about being gay and he made sure to not sugar-coat his sexual interest in men. His expulsion from the Prussian military was a little ambiguous, but it was clear it was definitely about a sexual relationship with another man. Either he was indiscrete about it, or the breakup went badly, or he cheated on someone, the possible reasons are ambiguous, but in his letters later in life, he was pretty clear that it was something of that nature.

Steuben was an interesting fellow; he also brought an elite guard with him from Prussia, who were all quite well-experienced soldiers from what was, at the time, the world’s elite military force. The other thing he brought to Valley Forge when he began the training was his sleigh, his italian greyhounds, and his ‘beautiful boyfriends.’ People were, in this valley, hungry enough to be eating their shoes, and Steuben rocks up on a sleigh, with dogs and boyfriends, flips off his fur coat and starts the I’ll Make A Man Out Of You bit from Mu Lan.

This is a small bit of history, and I am no fan of the US Military, but gosh it’s funny how a country that was paralysed only a few years ago about the conversation of ‘gays in the military’ forgot that it was founded in one of the gayest ways by one of the gayest generals, who was also one of their undeniable best.

Here’s to you, you massive prancing queer, and your boyfriends, too. Shame how it’s all shaken out.