According to all known laws of aviation, there is no way a bee should be able to fly. Its wings are too small to get its fat little body off the ground. The bee, of course, flies anyway because bees don’t care what humans think is impossible.

No, not that kind of bee. 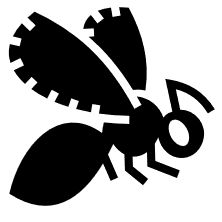 If you’re not from a church or school environment that has this idea, a ‘working bee’ is a sort of social event, where a set of volunteers come together to do some kind of project. I don’t know why it’s called that, it doesn’t have some association that makes sense, like, teased out to me. Like I don’t have a Work Bee or a Working Wasp in my head, it’s just this whole term – [Working Bee] – which has to be used as a whole noun. ‘We’re going to have a Working Bee’ or ‘We’ll do that at the Working Bee.’

Now, my memory of my childhood is kind of swiss cheese. Dates clash into each other and anchoring details in different memories are all tangled up. Any history of my childhood from about before when I was… fifteen or so is ultimately untrustworthy, so I have done what I can to check up on this.

‘Working Bee’ was, for my childhood, what ‘Saturday’ meant.

The weekly schedule for me, starting sometime around age four or five, not sure when, was that there were five days of school, monday to friday, and sunday was two church services. Sunday, it was first Sunday School, which… I want to say was 8:30? Not sure. Then after Sunday School, we’d go to church, and church would finish around 12 or 1. Then it was home, for a few hours and then to church for the evening service, which started at, I think, 6, and lasted until 9, and meant that home time meant a small dinner like baked beans on toast, and straight to bed.

You might think that losing half your weekend to church is a bit of a bummer, but if it helps, I didn’t lose half my weekend: I lost my weekend. Because the Saturday was Working Bee day. Starting at around age 4.

I want to say ‘every Saturday’ but it wasn’t… quite… all of them. Just so much that I lost track of the alternative. Functionally every Saturday, we would go down to the school property, where we’d do… work. I can’t remember most of what we did; digging ditches was one thing. Cleaning windows and walls was another. I have strong memories of being something like five years old and using a hammer and chisel to cut concrete off some bricks we got second hand, being very slow and timid so as to not run the risk of cutting off a finger. There were a lot of bumps and scrapes here. What’s more, most of the bullies that harrassed me at school also were here, so I could sometimes get chased and hurt by them, then.

Eventually, I sort of found a job I could do consistently that kept me away from other kids who wanted to hit me, and that was usually some form of food prep with my dad for the lunches. This meant I have memories of doing things like buttering twenty loaves of bread, or peeling piles of potatoes or wrapping lots and lots of sausages in bacon, for their eventual roasting.

Time to time I talk about my childhood, and little odd things about it, things I didn’t even realise were weird until just recently. In this case, what reminded me to explain Working Bees to my friends was how, in order to watch shows like Darkwing Duck, I had to record our saturday morning cartoons, and watch them in the afternoon when the TV was unused. Like, Saturday morning cartoons were there for you to watch, not to record for watching when you had free time.

It was saturday morning.

That’s when kids should just be free to sit around and watch cartoons.