One of the most dangerous things to fundamentalism is a desire to be good.

This post was in part spurred by relistening to the absolutely dreadful Camp Kookawacka Woods by Patch the Pirate, a subject so dreadful I feel a bit like I should do a rewatch podcast just so I can impress upon people just how utterly yikesy the whole franchise is at its core. Listening to it, though, with Fox, I had to let her know that some of the songs (that were performed pretty well) were hymns, and some of the songs were based on old campfire songs, and some of the songs were rip-offs of pop songs, and how the whole thing was just so cheap and hacky. 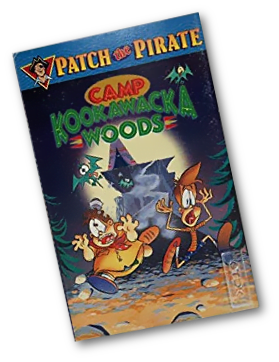 This is a pattern.

If you’ve ever gone looking for what I call Christian Replacement Media, you might have noticed that it’s kind of bad? Not necessarily remarkably bad, no glorious-trainwreck The Room style hubristic excess, it’s just that the best of these movies tends to crest a Pretty Alright level. Probably the best Christian Media Escapee band is Five Iron Frenzy, which is to say that the entire right-wing music machine was able to produce a single good ska band of leftists, which considering the number of times they’re rolling that dice is not a great average. The movies, the branding, the graphic design, almost everything you see in the Christian Replacement Sphere is a slightly shit version of whatever it’s replicating.

Oh, they’re often expensive. Yet even the things that are expensive in this space tend to be gaudy, or overpaid for. When it comes to art and media these stories are almost always just slightly inferior, confusingly weak versions of things that aren’t actually that hard to get right. There are bestselling Christian authors whose work crests the quality of maybe a decent fanfiction.

I have a theory.

No, wait, I have a hypothesis.

The hypothesis is built out of my experience, and the experience of a few ex-fundie friends. We’ve talked about it, about the things that pulled us away from the faith, and how those things that pulled us off the path were not the fun, excellent temptations we were warned against, but inevitably, a drive to be good at something. I didn’t learn my eschatology and biblical foundational theory because I wanted to prove it wrong. I learned it, because I wanted to be able to prove it right. Nonbelievers would come at me with arguments, I was told, and so I wanted to understand those arguments so I could show how they were wrong. One of my friends wanted to do excellent work rendering graphics for their church, and so they wanted to study how graphics worked and how to convince people with the icon rendered in front of them. Another was driven by a desire to Make Computers Work.

None of us set out to fall.

The basic idea is this: To be good at something requires context and practice. Gaining either of these things inevitably exposes you to the ways in which fundamentalist church spaces fail.

It’s not that church seeks out awful artists. It’s that the modern American church is a sorting algorithm that wants to throw out the good artists in the name of keeping the people who are content to be average at things. Oh, they may want the numinous and the excellent, but if you ask a preacher to choose between a ‘faithful’ artist vs a ‘troubled’ one, they’re going to plomp for the pious one every time.

Plus, the faithful don’t tend to charge what they’re worth.