This here is a follow up to yesterday’s article about the fact that Bleach used swords as the fundamental metaphor for a bunch of characters. Want some examples? Well: 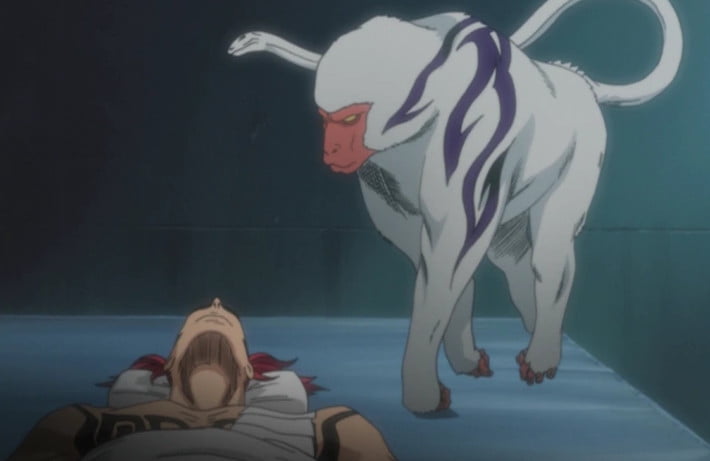 Hey! This is going to involve talking about stuff to do with genders, just in case you want to skip to the next image.

Anyway, Abari Renji has a sword named Zabimaru. We get to see in the course of the story that your sword doesn’t just have a material presence in your hand, it also has a way it can visualise so you can talk to it. But, and this is important, and a plot point later on, your sword is you – it’s part of you, it’s made out of you, and that you-ness permeates it. This may be a familiar experience to some people, where you can argue with yourself about things. We get to see Zabimaru in this form which is – at first – rare in the story. The avatar Zabimaru has when it talks to Renji is based – perhaps – on a mythological creature called a Nue, so, the body is a baboon, already a great critter to start with, and the tail of it is a cobra. Zabimaru has two heads, and when Zabimaru talks to Renji, it has two voices. They don’t agree with each other, even.

Well, here’s the extra thing: Zabimaru’s head and tail have different voices, and one of those voices is coded masculine and the other is coded feminine. In an anime filler arc, where the swords are animated into characters, and that’s a whole thing, one of the characters representing the baboon is femme, the one representing the snake is masculine.

That’s pretty interesting! This device lets the character represent a variety of inner selves, and amplifies that complexity of having a femme and masc identity at war with the self. Now, there’s something inherently Gendersy about having a sword that represents you that has a different gender to you, but it’s a cool thing anyway, because it can be used to represent the idea that for some people, there are just these different inner personas and none of that necessarily has demands or requirements on the person’s, as it were, consensus gender.

Or maybe Renji is trans. I don’t think he is, but whatever, knock yourselves out, fans. 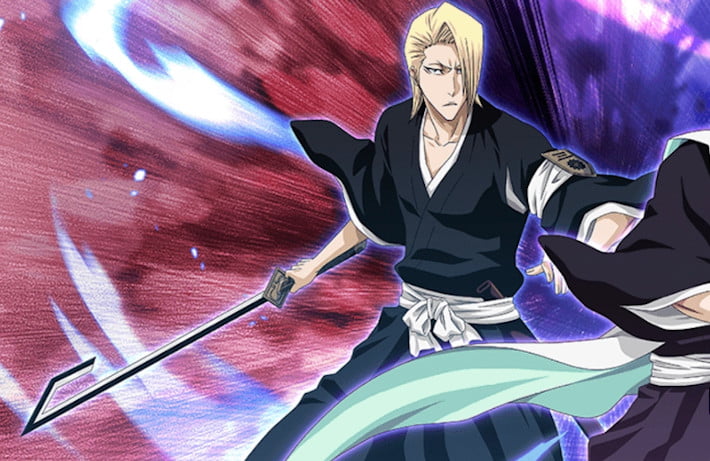 What about Kira? Kira was the off-cut of an off-cut. Ichimaru Gin’s lieutenant, Kira spent the Soul Society arc following around a guy with a ‘I will betray everyone’ timer on his chest, and then it turned out that he did and he was and Kira had to run around finding something to do with himself. Kira was always depicted as, well, a total weenus who didn’t like fighting, but when the lieutenants all got a chance to fight, you learned how his weapon, Wabisuke works.

Wabisuke is Kira’s sword, and it works by making whatever it hits heavy. Heavier. Every single time it hits something, over time, it gets harder and harder to interact with. When he blocks an attack, your sword gets heavier. When you block his attack, your sword gets heavier. And each of these interactions build up, build up, build up, until you’re left unable to act, unable to bear the weight you have, and maybe leaving you to flee.

(This is never used for anything too cool, don’t worry about it.)

Okay, so what’s this? This is, stated in text, Kira grappling with his anxiety. It’s a weaponised form of imposing on other people the way that Kira is himself, constantly struggling with coping with just doing stuff at all, and how every interaction makes each interaction that comes after it harder. Kira is an anxious person who hates to commit to fighting, so when he does, it’s in a way that makes the fight long and slow and hard and better to give up on. This is a great way – IN MY OPINION, he shouted at the comment you were preparing to unleash – to present a character who has a debilitating problem, without making it mean that that character has to sit things out.

Shounen power fantasies are great, and they’re for everyone. We see unsighted characters, deaf characters, characters missing limbs, and all sorts of other disabilities, but for situations like anxiety, they tend to be shown as a reason a character doesn’t get involved. This doesn’t just let Kira get involved, but it makes Kira’s involvement reflect his anxiety. That’s cool! 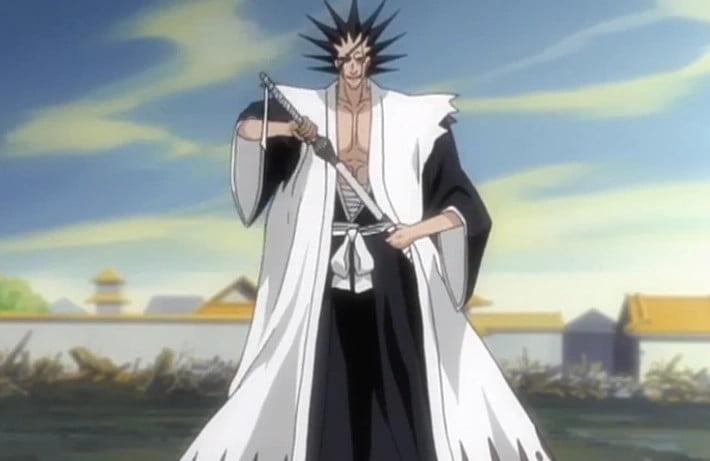 Kenpachi is a great big brawling goon of a character, an absolute beast who is throughout the whole series, consistently represented as being basically a walking, talking violence elemental. While I watched the series, they even had the restraint to never have him job out to anyone – he was always the top dog, which meant that when he got involved in a story, it was either as a threat people had to route around, or as the monster who was going to handle things the heroes couldn’t.

Don’t worry, this idea probably gets thrown into the trash later.

Anyway, Kenpachi is this super ghost hell beast, to the point where he’s literally doing things to make fighting him easier because even people who have special abilities designed to stop someone like him, he still fucks them up effortlessly even with these drawbacks.

And Kenpachi’s sword looks like a smashed up poky stick, completely ragged. It’s always out, it’s this constant overflowing thing. He doesn’t unleash it, he doesn’t bankai it – he’s just literally always on, and all he does, all he offers to any given fight is just being amazing at fighting with a sword.

That’s really cool! That subverts the typical narrative structure, and there’s a way to show that a character doesn’t necessarily follow the rules you set up without completely violating them. 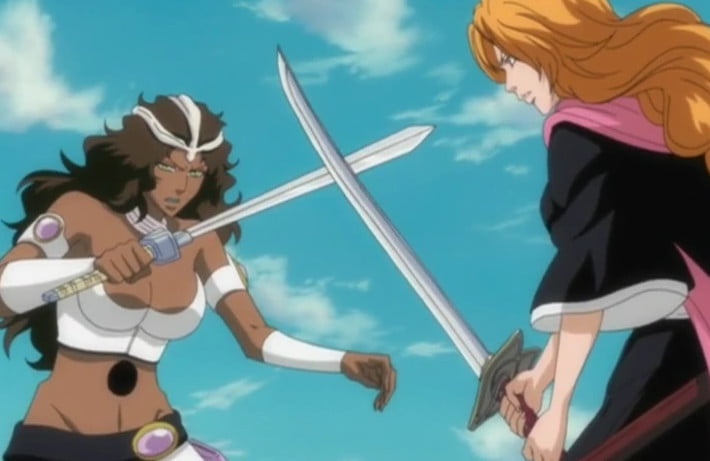 Speaking of genders and we might not have been because who knows how much work I’m putting into this nonsense, fuckin’ whatever, and this may just be an artifact of translation, but Matsumoto Rangiku’s zanpakuto. If you don’t remember Matsumoto Rangiku, she’s the gigantic pair of boobs that show up in every single piece of promotional art after a certain point. She is also, however, great, and I love her, because she’s this slacker death bimbo who deliberately expends the minimum amount of effort for anything.

Her sword, Haineko, or ash cat, is shown in the series once, turns into a cloud of ash and she can then use the remaining sword to cut any point where the ash has touched. She turns her weapon into, essentially, a gas grenade, letting her, you know, stab people in their own mouths. This is a fantastic power, scary as hell, and extremely dangerous if it’s being employed by someone devious or vicious.

Matsumoto doesn’t really use it to that great an effect – she’s not an Ichigo, so she doesn’t tend to get to do that much in the story – but it’s still this amazingly powerful effect that nonetheless gets held back, because the character in question isn’t cruel enough to act on it, and that lack of viciousness plays out in her usual laziness and disinterest in violence.

There’s also a weird little tidbit here where the first time I saw her refer to Haineko, she referred to the sword as ‘he,’ and ‘his’ powers. Later on, the series would incarnate Haineko as, well, a cat girl with giant boobs, so I guess Haineko says trans rights? 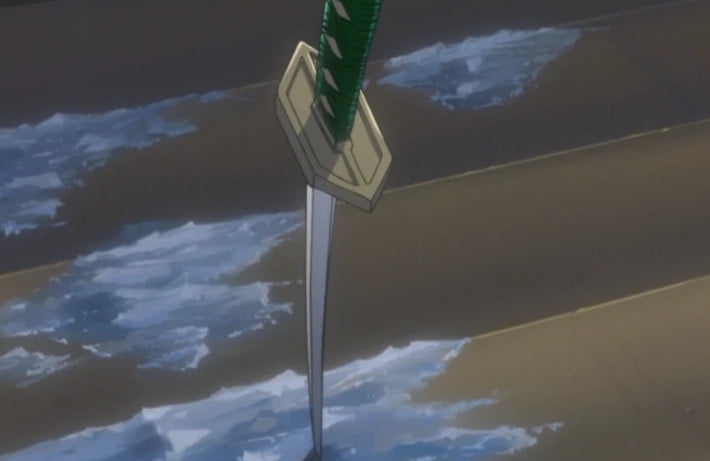 Finally, there’s the sword of Aizen, which

I guess, spoilers for a 15 year old arc for an anime I do not recommend you watch.

Anyway, Aizen’s sword doesn’t work the way most other swords work. What his sword does is if you ever see it unleashed, in Shikai form, then you have been ‘affected’ by his sword. Then, at any point, he can use his sword to create perfect illusions. These illusions will only work on you if you’ve seen the sword in shikai, but if you have, they’re functionally perfect. Well well well, ain’t that an amazing and interesting power that pushes the definition of what a ‘sword’ can be to its absolute bloody limit?

If you can walk down the street, with a sword, it tells something to the people who watch you. In this culture, too – Aizen’s sword reflects his status as a Captain and it gets its power by showing you his status. Oh, sure, they use this to do … silly things, and it winds up not mattering, because Aizen’s ability to basically violate consensus reality for the majority of the existing cast just kind of goes away in favour of him basically turning into a naked Evangelion Angel with wave motion cannons by the end, but as long as the character’s powers are meant to be metaphorised as a sword…

Well, you get something interesting.