The Botch is a hidden-information bluffing card game for 3 to 12 players where everyone’s an operator in a high-risks crime caper film, which plays out in ten to fifteen minutes. You’ll take risks, you’ll make threats, you’ll break promises and you’ll break bones, and the whole game can be bought on print-and-play for five bucks, and right now.

Or you wanna hear more? That’s fine, then, here we go: 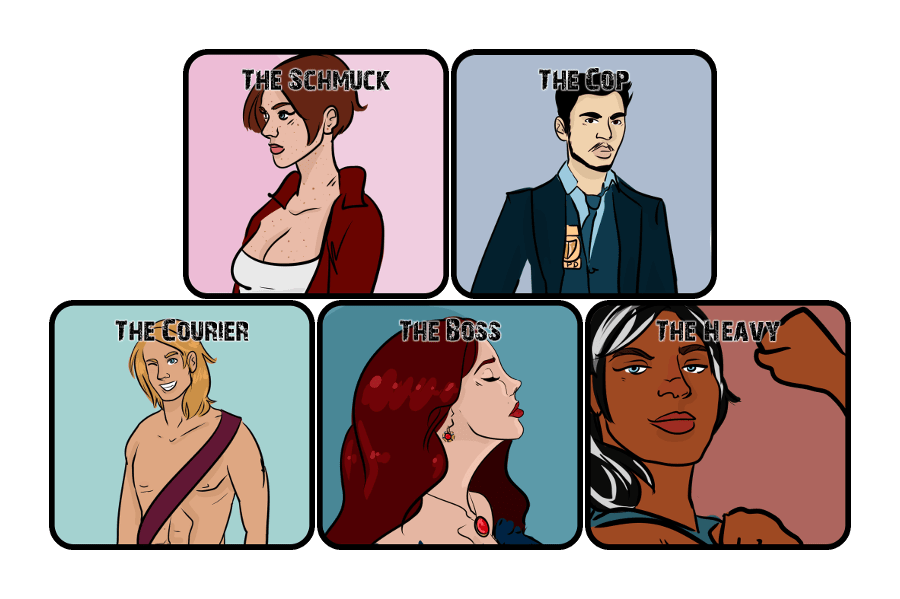 The Botch starts where every player receives a role card telling you who you are in this little crime drama. Someone’s going to be The Boss, the aloof crime lord whose pockets run so deep, nobody dares cross her directly – and everyone wheels around her.

Once you know who you are, you’re handed an item, face down, and two diamonds. What ensues is a fracas where you’re trying to lie, cheat, cajole, steal, threaten and just plain rob your way to ten Diamonds, to walk away with the Boss’ loot.

The Botch also continues my desire to respect players’ space, time, and effort. While other card games I’ve made need physical cards to be playable – as shuffling is part of the game’s loop – you can play The Botch with just printed cards and your own tokens. Each game’s prepared information load is reasonably light – there are two cards for each player, and half of them don’t change. Knowing and predicting where items are going, or what players are going to do is the bulk of the game.

The Botch is a very hard game to master, and it’s designed so that as your group becomes familiar with it, you’ll start expanding it as well – there are an extra seven roles and items, which can be added to the game to complicate things if any one strategy is proving to be too good.

Now, my secret hope is that playing a game this simple (in terms of parts) and with an inherent view towards expansion is going to tease at the minds of younger players. I’m hoping some people will realise that selecting the cards to put in The Botch is a game as well. I’m hoping this will inspire people to play all over again.

I’m also hoping you’ll buy it because it sounds cool.

There will be more devlogcasts about this game, particularly where I talk with the amazing author, Cass Marshall, about what she’s done. For now? Five bucks for a game! Print and play, or a set so slender you can fit it in your wallet. Take it anywhere, play it any time, have fun running the jewels.

And if my pitch didn’t sell you on it…?

That’s okay! I want you making decisions with as much information as you can have, and I want you to buy games that are good choices for you.