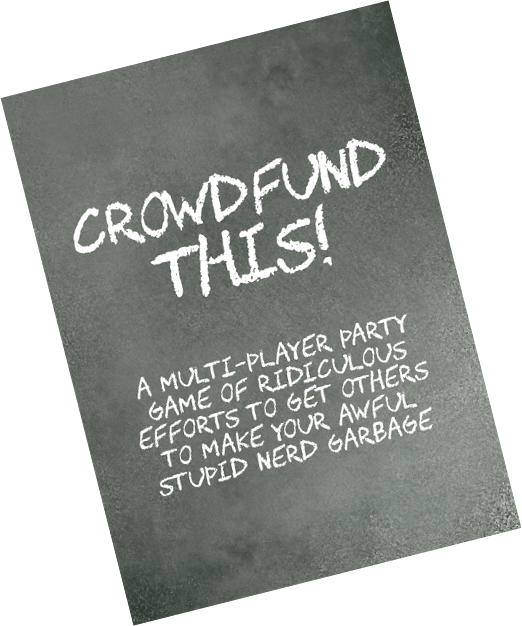 Crowdfound This! is a multi-player microgame about convincing other people to engage in your ridiculous nerd project, where you overpromise and underdeliver, in the hopes of finding the magical combination of suggestions that your friends will rally around. The whole game takes roughly ten minutes to play and three to ten people can play. Sound good? Great, you can buy it here! Need more? Well-Crowdfund This is a game about the obnoxious ‘ideas guy’ person who can come up with a ridiculous suggestion that sounds great but doesn’t necessarily have any skills to follow through. Every player gets a handful of cards that they then have to weave together into a coherent sounding project, in the hopes that the other players will rally around your idea. Every time you frame part of your idea that a card represents, you can set it down, and draw another card, turning your project from something small and manageable to something enormous and ridiculous – all the while risking the odds that you will have a total disaster of a project on your hands.

One of the immediate comparisons it’s drawn is to Cards Against Humanity, which is it’s a game about sitting around and using cards to try and be funny, but while Cards Against Humanity’s core engagement is being forgiven for whatever vile shit you have to say about marginalised people (because it’s just a game), Crowdfund This aims its target of ridicule at the overpromising, trope-and-meme driven world of nerd consumer culture. This is the kind of game that works best if you’re looking for people who can have fun talking about nonsense products and ideas. If you’ve ever dealt with Marketing Departments, you may just remember this dynamic.

Ultimately, Crowdfund This is a joke of a game for joking situations, restrictions to force some creativity in the joke you’re going to tell, and it just so happens to double up as a ridiculous idea generator. If this sounds like the kind of game that’d appeal to you, you can go buy a copy at DriveThruCards. If it doesn’t – that’s fine! I hope my next project will be the one that sparks your interest.