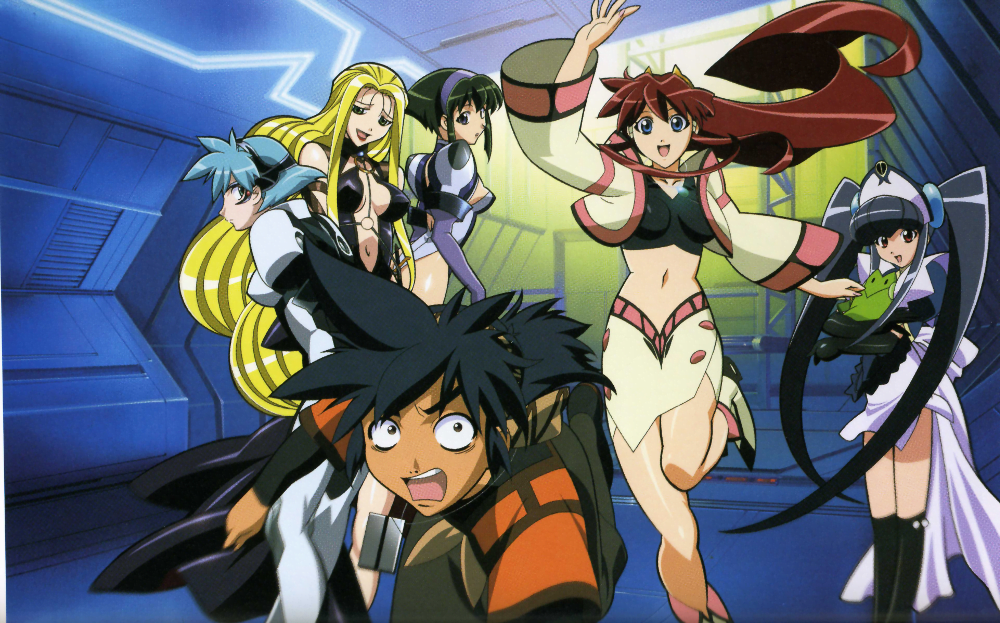 The premise of Vandread is – okay, hold on – there are these two planets of entirely gender-segregated populations reproducing through artificial means that been at war with one another for centuries because the men planet thinks the women planet eat liver and it’s all cast as a propoganda war, where our main character such as he is Hibiki is working in an awful factory job that dehumanises him. He stows away on the warship that holds a mecha he helped to build, to try and steal it, because he’s an idiot, and then Lesbian Pirates attack as the warship is about to go show off how great it is. A Space Accident ensues and the warship is swallowed in part by the pirate ship, which then becomes an Extremely Sweet Ship with three male prisoners on board – Hibiki, and two other guys from his own home culture, a doctor and a navigator. The ship is then flung out into the middle of nowhere and our cast have to work out what happened, why their cultures are the way they are, who they are and why some of the mecha and space-ships they have can now combine into a powerful Vandread Unit.

Oh yeah, the shapeshifting robot thing comes up, and there’s also these unidentified attackers who keep trying to kill them.

This is the first episode.

Vandread then follows an almost Star-Trekky kind of plot arc where they move from place to place, and each new episode brings a new problem they handle and learn a bit about the overarcing plot. Sometimes it’s a internal drama on the space-ship, Hibiki learning he’s a doofus, or sometimes it’s going to a new planet and finding out there’s a problem there. The plot on this one kind of unfolds, but it’s also much more of a story about a world as a concept than it is about anything the story wants to say with that.

For all that Vandread is a story about segregated genders, though, there are two really weird points to it – and they get a bit spoilery, so I’ll jump on the far side of a cut for that, so you can avoid it. 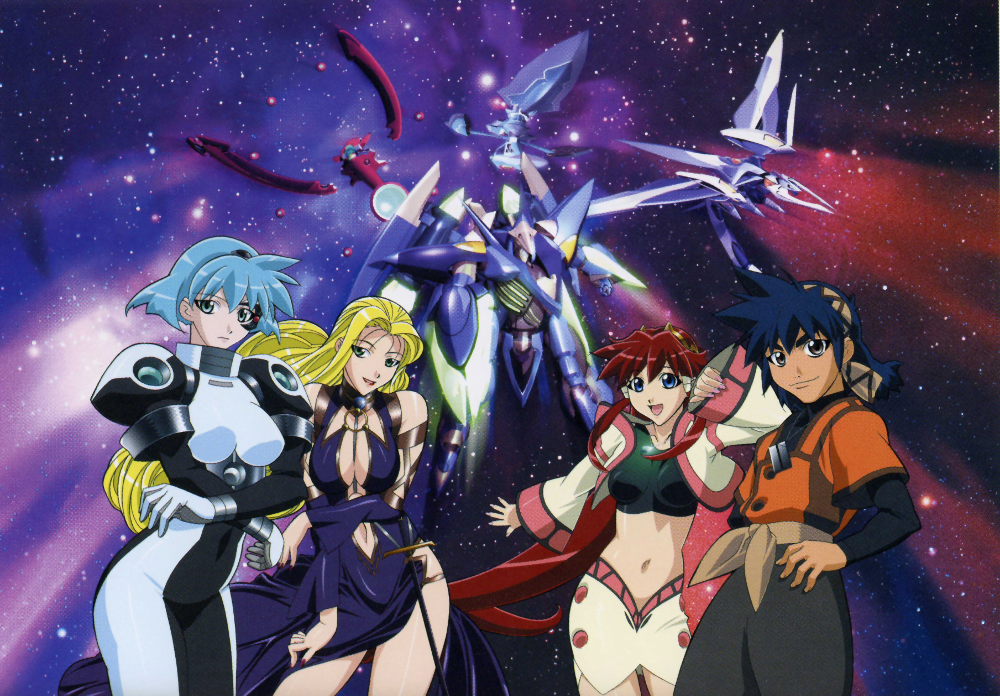 Finding images for this blog post did yield a surprising numbre of promotional artworks that were clearly 4k+ scans of printed images, which is a bit weird.

First things first: The story makes it clear that the women and men of Vandread are separated by an external, colonised force that is harvesting their planets for parts. They’re segregated because these two planets are the specialised farms for testicles and uteruses and related bits. Yes, this is ridiculous. The source of this colonisation is a corrupted Earth, overwhelmed with pollution and self-destruction, creating whole worlds to sustain their long-term health, with planets whose religions are based around keeping their own part clean and safe. So there’s a planet of people who avoid everything to damage their spinal chords, because they’re harvested for just that one part. What’s more, the man-and-woman planets are not designed to be in conflict! They found one another accidentally, and what ensued was a violent war because the man planet had been culturally designed to keep their testicles and what not all as pure as possible. At the end of the second series, there’s talk about destroying both planets and starting again because they keep attacking one another and damaging the farmed material!

And here’s the thing with Vandread that hangs around my head about it: for all that the structure of the story is about a man-only culture’s members being injected into a woman’s culture, the story is pretty much disdainful of men.

There are three male characters in the series, and all of them learn their lives are enriched by including women in them, by listening to women, by respecting the culture of the women. On the other hand, the women’s culture is full of things like relationships and love and food and laughter and parent hood – as opposed to the vat-grown hyper-industrialised militaristic dictatorship of the male planet.

The weirdest thing about this is that this story, which is an anime full of lesbians, is it somehow found the room to include a trans woman – and then holds out an extensive scene defending her womanhood as a woman.

Of course there are readings of the text that are much less pleasant; you can take the lone pirate (dickhead) as a voice of authority, and see his perceptions as being the true values of the series, with all the characters wasting time around him. On the other hand, he’s refuted pretty hard by the way nobody agrees with him and succeeds anyway. You can perceive the defence of the trans woman as being the author of the series trying to shout out NO HOMO really loudly about this plot twist they weren’t seriously thinking through.

I will throw out this last point though. The director and writer of Vandread was Takeshi Mori, who also worked on, amongst other things, Rurouni Kenshin, Gunsmith Cats, Lunar: Eternal Blue, Otaku No Video, Kimagure Orange Road, and Ranma 1/2. After Vandread, they moved on to Bamboo Blade, Darker Than Black, and Eureka Seven. Draw your own conclusions from that body of work about how queer-friendly you think they are.

And the opening theme for Vandread, Trust by Salia, owns bones.