My first draft for everything this month has been a series of articles that are mostly me yelling angrily about various fan theories about how queer series aren’t queer, or how easily you could queer a series and improve it (Blacklist), but one thing I’ve been avoiding doing too much is talking about work that you might think of as serious queer media.

I have a couple of reasons for this. One is that I tend to find this stuff really super alienating. I’ve been looking for options of Queer Media to cover that I think I can cover in a way that’s useful or meaningful. It has involved interrogating what I even talk about, or why.

The third type, which I’ve talked about already, is Subtextual Queer Media, where the queerness isn’t there so much as it’s easy to see queerness if you know about it. You know, stuff where it’s Queer, and the Fanbase are very sure it’s Queer, but if you can watch it as someone who doesn’t know what queerness is, or who believes that same-sex people can just be friends, then it doesn’t make you ask questions.

And when it comes to the Painful Queer media, I just don’t feel like I’m qualified or that I can offer a meaningful insight. What’s more, showcasing this kind of work feels like the wrong fit for me. Not that it’s not valuable or meaningful, or that I think you shouldn’t make it if it’s the kind of art you want to make.

The idea that Queer media is confined to this space where the art has to be tragic, has to be painful, or it has to be completely facile reminds me of Hannah Gadsby, in Nanette, talking about how for the people who aren’t beneficiaries of the privilege system of our world, to stand on a stage and lay bare your soul is not an act of humility, it is an act of humiliation. I don’t think that I have a meaningful lens to offer on that.

I want to write about adventure. I want to write about heroics. I don’t want to try and make some way to connect my damaged soul to the writings of say, an enby making a game about the challenges of American medical health care. I’m damaged in different ways, so I can’t really offer my meaningful lense to the matter, and I don’t want to hold up these traumatic experiences of other people as if I’m somehow good for showing you this thing you totally would never have checked out if I hadn’t shown it to you.

That’s not what I want to write about either! I don’t see the value. My damage and my situation aren’t, I feel, taken seriously in queer spaces, so it’s not like me saying ‘here’s how this intersects with my pain’ is meaningful to anyone. Tragic manpain, I’m sure. And if I can’t meaningfully contribute to the conversation, I don’t want to be seen as performatively looking at things that don’t speak to me. It was bad enough to deal with a month of romance games that made me feel gross, after all.

Nah, what I want to talk about is fighting and reasons. Characters and motivations, people who do stuff and why they do that stuff. Slow boiling coffeeshop AUs are for other people. Instead, I want to show you queer adventures and stories about fighting baddies and punching dragons and slaying or being cool monsters, but like actually being a cool monster and not a monster being a metaphor for atypical body types and therefore you just want to play videogames and sleep in. That means that I lose some space for complexity, which I guess I’m okay with, because what I lose is stuff I wouldn’t do a good or meaningful job dealing with. Let’s instead spend our time finding queer media that isn’t About Queerness but is instead about Doing Things where Queerness is an assumed standard. I can do fun and goofy and non-intense. 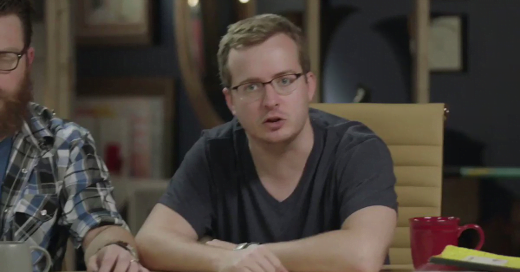 In the words of Griffin McElroy, This is a ding-dong podcast.