I’ve had this card game in progress now for far too long.

The idea is a game where you’re constructing unicorns with interesting names from two halves. Half the cards are unicorn forequarters, the other half are… well there’s no proper term for them (that I’m going to bother looking up) so we just have to call them what they are. They’re unicorn butts. 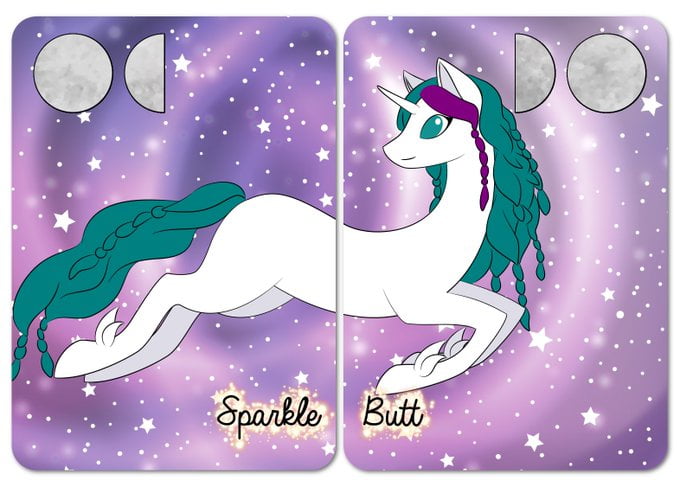 Once upon a time, this game started out as a simple, competitive game with two decks; you would play the cards, two at a time, either adding them to your herd of unicorns, or to an opponent’s herd of unicorns. The original idea was that they were just going to be math functions – so some unicorns would add some numbers, some would subtract some numbers. So you could put together a butt with a – and a head with a 4, and give it to your opponent, to give them -4. Honestly, that game is pretty doable and pretty easy – I might even hammer it out as a sort of pattern-puzzle matchy game for under-sixes sometime.

I wanted though to make this game cooperative, though, and since part of the reason to build a unicorn was to give it a funny/silly/goofy name, and if there were some cards with negative effects, that meant there’d be some unicorn name components that were always bad. Had to kick that one in the neck right away.

I’d also started by setting out 26 cards as butts and 26 cards as forequarters, and I know there’s a horse expert reading this and she’s so mad at my terminology. Anyway, in my attempts to redesign this game, I’ve tried to find a way to minimise that number, or maybe expand my options… and with that came a new idea.

The idea is that each unicorn card has a head, and a butt, on either side. At the start of the game, you put all the cards so the same face is up (say the butt, because butts are funny. You split that deck evenly in half, then flip it over, and shuffle them together. Now you have an even number of heads, and butts. This means that suddenly, my 26 head and 26 butt cards are 26 cards, meaning that the deck now has room for more unicorns (yay) and some other cards (which give me room to make a cooperative AI for the game).

This is a simple little mechanistic change of the game’s design, and now I’ve put it down somewhere I hopefully won’t fricking forget it.