Over on Reddit in February, someone asked about the idea of two player RPGs – the notion of a RPG system where players take turns in the Gamemaster role. That’s all I got – just the basic question of is this a thing?

And well, that was interesting. I thought about it.

The absolute first thought though, was that in the right pair of players, you don’t need anything new or different. Lots of games can be easily adjusted so the challenges can handle a solo character, players can play multiple characters, all those typical ways of dealing with absent players works fine. Barring for games that require voting (and those aren’t that common), there’s nothing that doesn’t already work.

This is a solved problem for players who want to just play D&D and can swap things back and forth with no problem. You could do it super episodic, too! Imagine a Scum & Villainy game that essentially worked like Star Trek: The Next Generation, where each week you swap storyteller to deal with a new thing.

Still, I do see a problem with this: Maintaining suspense and surprise. How do I make sure there are plot elements and narrative beats that handle the give and take of storytelling, and make for a long-term narrative where I can be surprised by things I put into the story without necessarily having stories I laid the groundwork for changed out from underneath me?

While I don’t have a system, I have an idea for a mechanic that can give the game some sinew.

And it involves playing cards. 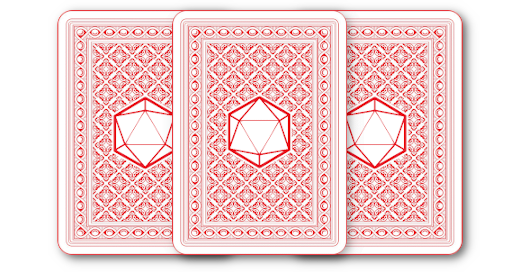 Okay, the idea is you start out with a deck of ordinary playing cards. This is important because you want something that’s reasonably replicable where it doesn’t matter if the object goes away. It can be destroyed, it can be damaged, and it can be written on.

This deck of cards is going to be the interaction of elements that each player can use in their section of the story they’re DMing. When you introduce something you want to make important, or when a player indicates in a session that they want to come back to something, the players take an unwritten-on card, write that on a card and put it back into the deck. Then, when the time comes to exchange control of the DMing role, the new DM draws a few cards and sees what stuff in the story is available to them.

This gives you a way to be surprised when things come back, and it takes some of the long term structure away from the players in a way that makes both players uncertain in an interesting way.

You can write more on each card as things happen; you can use this when a plot changes or transforms something, you can edit its card, and shuffle it back in. You can even do ‘trades’ – where a DM may want to ‘save’ something for later.

The cards can be used as action points too to smooth things over – take a few cards off the top of the deck, and the player can use that card to make rerolls, or abrogate special abilities, or survive things they wouldn’t – and then adding those cards to the DM’s pool of plot tools. So you might want to avoid letting a baddy get away so you spend a card to tackle them – but now that card gives another plot point to your DM for later.