A million years ago – oh wow, 2019? Okay, sounds fake, but whatever – I wrote an article about the idea of owlbear traps. Owlbear Traps are the D&D-specific notion of gameplay elements where a player can be tricked into doing something that’s bad for them or unsatisfying without having actually done anything wrong.

Owlbear traps are some of your basic ingroup-outgroup problems, and it’s very important to know that an owlbear trap is not the idea of unbalanced design; where you make a design and don’t quite realise how good it is, or how bad it is, and so players who choose one option over another wind up unsatisfied because of the power difference. An owlbear trap is intentional.

Owlbear traps are not just as simple as ‘we messed up,’ no no. The owlbear trap is when you find a way to fool yourself into thinking this kind of mistake is not a problem and is, Good, Actually. Owlbear traps are when you’re confronted with power biases in your game and you say something to the effect of ‘I want to cater to a lot of diverse players, but I want these players who choose the things I like to have a better time.’

This is an owlbear trap, but in the case of D&D, I want to outline: It’s really stupid as owlbear traps go. Like, if you’re trying to punish someone through character creations, in order to change their behaviour, you’re not going to do it. This is, essentially, an owlbear trap that won’t catch owlbears.

Players need to be able to see clear stimulus response and have a fast feedback loop. If a player swings an attack at a monster, rolls low, and misses, that doesn’t tell them that they made a bad attack, that tells them that the dice roll was low. The influence of a low number on a die roll is sufficient that any of the consequences of the roll are easily attributed to that roll. Miss chances as presented in 3.5 and 3.0 worked that way too – where you would attack an enemy, and then, regardless of AC or not, you had a % to miss, and it was always a little ambiguous as to whether or not you had to report to players why they missed. 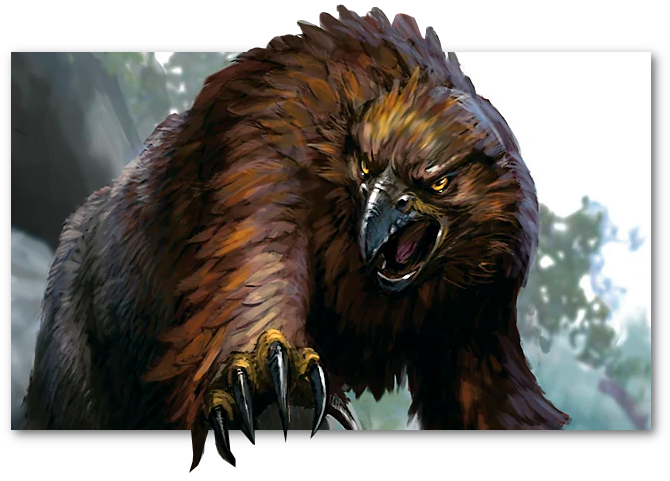 This meant that there were ways to run the game that were extremely ambiguous – players could swing and miss and swing and miss and never really gather feedback about whether they were wasting their time or getting unlucky. 4th Edition had a more clear relationship to what players could know and what they could glean by looking at monsters, so the mechanical information wasn’t so clearly ambiguated.

And that’s for the information and feedback loop of repeated attack rolls in combat.

Now, consider how much more obscure the consequences of your decisions have to be for character design choices to suck ass. Oh, sure, players will often have moments where they compare their character to other characters, but that doesn’t mean they’re right. A player might see another player doing well, and think that means their character is well, but all that means is they can compare themselves to another player, and that player may be good, or may be rolling well, or may have found something that uniquely benefits a campaign, like an undead hunting cleric who turned up in a campaign full of undead.

This means players rarely are able to get a meaningful feedback loop between two characters of different types in different campaigns. Players like me will be doing the math for comparison and making choices based on what’s more or less common, if critical hits are going to happen enough to make me happy, if we find a particular enemy type interesting enough to want to encourage their presence, but that’s an analytical process that doesn’t get, as it were, field tested. But I don’t need to see that Toughness sucks in play to be able to say Toughness sucks! For the players who don’t do that kind of analysis, these owlbear traps never fire. They make their characters, they pick the choices they like, and when those choices don’t let them hit an optimal or above-average performance they don’t notice, because there’s lots of noise of everything else going on in the game.

This is one reason why I think Dungeons & Dragons, with its ability scores and feats and yes, race and class system, oh no shock horror, is a really good system. Each of those choices can do a lot of the work of building your character in a clear, distinct step, and by providing a basic package of – at least hypothetically – roughly balanced character components that can’t slot together redundantly. You can definitely make a character ill-suited to a task you’re trying to aim at, but by providing big, foundational parts, the spaces where you can make mistakes or present yourself with problems are necessarily smaller.

There’s an idealism to the idea that, of course, you don’t do anything like this, and let players pick whatever they like in whatever combination, but there’s a type of player who finds that really appealing and a type of player who finds it overwhelming. The class and race and feat system D&D’s been using for a long time serves to provide a lot of that onramp, a way to give players a useful handle, and then let them customise that choice. If I have to choose between a philosophy between BESM and D&D, I know where I’m going to want to land.

And if you want a D&D that used this tight structure really well, well, have you looked at 4th Edition?