We return to talk about the values expressed by who we, in Australia, present on our currency. I promise this entry didn’t take a lot of research. I’d normally joke that ‘I don’t recognise these bills’ because I’m a digital person and don’t make this kind of cash transaction very often. The previous denominations of currency are here (five, ten, twenty), if you’d like to see them. 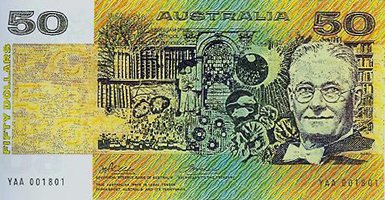 Chances are you know the name Florey, at least vaguely. You want a few moments…?

What if I mention Sir Alexander Fleming?

Right. Howard Florey was one of the two people who shared the Nobel Prize with Fleming for Medicine. They discovered between them this stuff called penicillin, which helped spread antibiotics throughout European culture, and therefore, its economic and physical colonies. Florey was an Australian from Adelaide who conducted the first medical trials of penicillin – trials in which the patient died because Florey and his team failed to make quite enough of the drug. 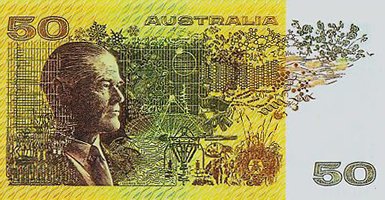 Hobby horse time! In Australia, we have this thing called the CSIRO, the Commonwealth Science and Industrial Research Organisation. While a bit of a kickball politically, CSIRO has been a longstanding part of Australia’s push to scientific discovery and research, and has made crops, space-ship equipment, internet technologies and all sorts of neat things in that same sprawling general category of ‘what good can this thing be?’

CSIRO went on to create the system of wireless TCP/IP transmission that you now know as Wi-Fi, and the patent was used without credit for quite some time by businesses like McDonalds. We sued over that.

Anyway, CSIRO is cool, and Sir Ian Clunies Ross was at first a parasite researcher for its forebear, then eventually, its director. He was also a vet, which means that this was one of the first-printing notes to have two qualified scientists on it.

In the new printing, we have Edith Cowan, who was the first woman elected to Australian parliament. In uh, 1921? Which is not bad, considering that we didn’t have a Parliament until 1900 and all, but it’s still a wee bit embarassing since despite allowing women to vote, we needed to pass special laws to let them be elected.

Edith Cowan was a pro-education, pro-information legislator. In an ironic twist, in her first election, she beat the man who was responsible for passing the legislation that gave her the right – or rather, stopped withholding the right – for her to run for parliament. Once she was elected, she pushed hard for womens’ rights and for education.

The most interesting thing about Edith Cowan’s very interesting life didn’t happen until after she died. Two years after her death, a clock was erected in honour of her – and people fucking protested it. What the hell, people of Western Australia? What possible reason to you have to not want to commemorate the passing of a person who did a thing first?

Now, Edith Cowan has a monument that gets handed around every day, her image is printed out and shared and given and everyone in the country possibly sees her about once a week. And to everyone who wanted to push back against her can suck a duck.

So before we go any further on the specifics of Mr Unaipon, it’s worth noting that David Unaipon was an Aboriginal Australian. To be specific, he was a Warrawaldie Lakalinyeri of the Ngarrindjeri, which is a set of words I am not only unqualified to pronounce, but are older than everything that I consider ‘my culture.’ Specifically, the term ‘Ngarrindjeri’ is a term used for a coalition of Aboriginal people in the area we now call Adelaide, and means ‘The People Of This Land.’

Mr Unaipon is credited broadly as ‘breaking stereotypes of Aboriginal people,’ which can be rephrased as ‘made it harder for White Australians to be quite so blatantly racist.’ David Unaipon was a smart man, and we know that because he filed for nineteen different patents of working inventions. We can also, if we didn’t know it, infer that he was an Aboriginal man, because he couldn’t afford to file those patents fully, given that he was poor, despite having a job as a bookkeeper. There are all these lovely quotes about how clever Mr Unaipon was, but they all use such patronising language to do it.

Setting aside what Mr Unaipon was talked about, and how he broke stereotypes, let’s just look at what he actually did. He was an avid reader, loved studying philosophy, science, music and literature. He invented a technique for, uh, and I’m just going to quote the patent here, ‘converted curvilineal motion into the straight line movement,’ which is used in modern shears. It’s used in almost all modern shears.

Mr Unaipon was credited for this patent once. He received no financial renumeration.

He also wrote poetry and books. He was a recognised expert on ballistics. He also wrote about the synthesis of Christendom and Aboriginal beliefs that he held. He gave lectures, pushed for Aboriginal rights, and when he was travelling around giving these lectures we didn’t let him stay in most of the nice hotels because good christ.

Jesus christ this is a depressing bill.

Basically, we have here a pair of people who at some points in our history, we said we didn’t want. Now they are icons of our nation, shared and recognised by the people of our country… but probably not as much, or as well as we should.