Almost two years ago now, I started what I had at the time intended to be a set of posts about the people who appear on the Australian currency. That post, The Value of a Dollar established my theory that currency is the common art created by a government, and reflects values that government has. We’ve done the five dollar bill, so let’s talk about the ten dollar bill! 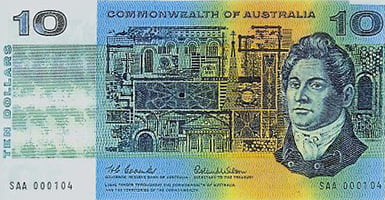 Francis Greenway was a convict sent to Australia for the crime of forgery. Take a moment to let that sink in – for a time, we had a man who was responsible for faking money, on our money. I’m sure he’d have been quite confused by the experience. 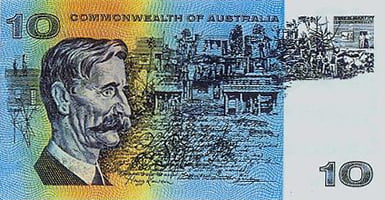 Henry Lawson was a short story writer, a poet, and a journalist when he had the time. Amongst his works was The Loaded Dog, a charming story we tell to children about a good-natured dog so stupid it eats dynamite and dies a horrific explosive death. I feel a bit bad here because Henry Lawson, while a crucial figure in Australian poetic history was overshadowed by… 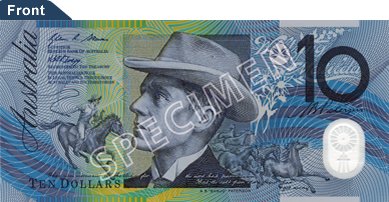 This guy, the new ten dollar bills’ chisel-featured Banjo Patterson. Patterson was… well, a journalist, a poet, and a short story author, and in his list of work we have things like The Man From Snowy River, or Clancy of the Overflow, or We’re All Australians Now, or, oh wait, here’s one you’d have heard of, Waltzing Matilda.

Banjo Patterson and Henry Lawson once had a slow-release rap battle, on the newspapers.

But poetry continues onto the obverse of the $10 with… 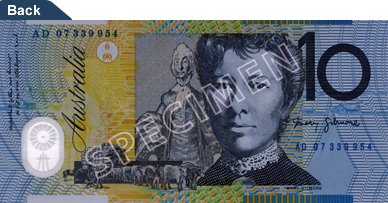 Dame Mary Gilmore was a journalist, poet, and political activist. She was also, as I say, a registered socialist – a firm believer in a structure where the primary purpose of the Australian nation was to benefit Australians – and therefore, she fought for and argued for ‘extreme’ positions in the 1920s like ‘Equal Pay For Women’ and ‘Government Subsidies For Mothers Who Want To Work’ or ‘Give Disabled/Disadvantaged People Money To Live.’

She had to separate from her political party for being ‘too extreme.’

Then, Mary Gilmore went on to write poetry and letters for the Tribune, which was the communist party’s newspaper. And then, because her poems kicked ass, she was made a Dame Commander of the Order of the British Empire by the crown – and she was the first person to be awarded that status thanks to literary work! Then she went on to write patriotic bolstering poetry, believing it important to give people strength to work together during the time of war, particularly No Foe Shall Gather our Harvest – the poem that is included on this note.

I like this. I like that our second most commonly-used currency used to have a forger who made a city pretty, and now it has a poet who opposed the idea of money.

Dame Mary Gilmore’s ideals have not yet been met, and we should not forget them.