Following on from our discussion of the $10 and $5 notes in Australian currency, we move on to the $20. We’re going to do things a little backwards this time: We’re going to start with the newer note. It’ll probably become more obvious when we’re done why. 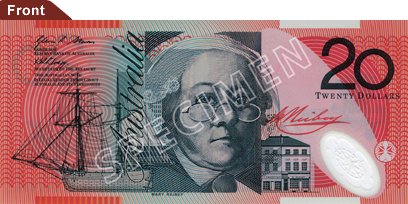 I feel a bit bad that we jump so quickly to this. Ms Reibey was a businesswoman. Like, that’s basically her big achievement, the reason she’s remembered, because she was a woman who became very successful in business. And I mean very successful in business – her estate was valued at £20,000 back when there weren’t many £s at all. If you walk along the dock areas of Sydney (that’s all of them) you’ll find a number of old copper plates on the buildings signifying when they were made – and a startling number of huge-ass warehouses for shipping were made in the 1820s.

See, Mary Reibey (and if I spell her name differently from time to time, don’t worry so did she) was in Australia because John Burrows was arrested for stealing a horse. That is to say, Mary Reibey’s crime-committing alter-ego got arrested and deported to Australia. Why did she steal a horse? Because she was bored. After being deported, she took up work as a nursemaid, then married an East India company worker – and when he travelled, she managed his estate. And his family – which wound up at seven or eight kids (give or take).

And then her husband died.

Most folk figured this would be when the Reibey business holdings in shipping would be distributed. Were they hell. She consolidated, and expanded, and expanded so aggressively that she founded a bank in her living room.

She retired in 1828 and spent her later years kicking around Newtown and giggling at the fictionalised novels people had written about her. 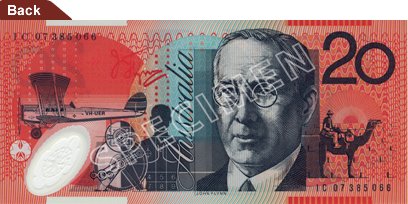 Remember how I mentioned airplanes were important to Australia? Well, turns out if you live out on the stockyards that are each individually larger than Delaware, you don’t have a lot of easily access to doctors. That was, at least, until the Flying Doctors service was started – and it was started by John Flynn.

Flynn was a really nice person, and I don’t mean that sarcastically; he wrote books on how to survive in bush environments and deal with medical problems or foraging for food and he made sure the book was distributed for free in the outback regions of Australia. But knowing that wasn’t enough, he moved on to found the Flying Doctors – which is exactly what it sounds like. Small planes that could reach a spread of territory the size of countries were loaded with a pilot, a doctor, and then flew around stockyards all across the great brown land of Australia, checking up on people.

The Flying Doctors became a really easily ridiculed TV series full of turgid melodrama, because we’re not very good at making TV, which is a goddamn shame because they’re really quite cool and badass and they help people. But oh well. 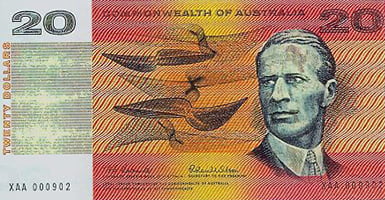 The first $20 was an interesting one because the two figures were linked in a way other notes weren’t: They were both aviators. Now, look, Australia is a country that’s basically the size of America with almost every major population center literally thousands of kilometers away from one another, so flight was important to our early, pre-internet infrastructure.

What’d he do? Smithy, as he was known, was kind of an endurance flier. First and lesser, he crossed the nation in a plane, which when the plane was basically a shoebox with wings and a bike engine, was pretty badass. Then he flew to New Zealand, crossing the Tasman. That was also pretty amazing. And then, he crossed the freaking Pacific.

When planes were a new piece of tech, we had to find out what they could do. We had to prove their limits. And Smithy was a grown man who was willing to strap his butt to one of these little pieces of wood and canvas, and risk his life in literally the most remote parts of the planet.

Sir Charles Kingsford-Smith died in a flight between India and Singapore, pushing the limits of what planes could do. 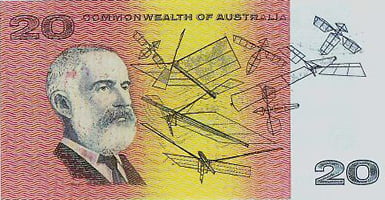 Now here’s the odd one.

Lawrence Hargraves is a slightly strange one to talk about for me because there’s the stories the history books offer, which are interesting and kind of distant. And then there’s the stories my family swap about the guy, stories we have heard from his great-niece.

Who is my grandmother.

So what I can tell you that seems to be publically agreed upon is that Lawrence Hargraves was a geek, one of those multi-disciplinary geeks back before science was quite so easily distributed. Thanks to living on a coastline hemmed in by a mountainside, he had the option of taking to very high altitudes to fly kites, which he did, and, with that thrill undertaken, he then decided to try flying kites with him in them.

Astoundingly, Lawrence Hargraves did not die by doing this.

Lawrence Hargraves was fascinated by the idea of human flight, but he was also scrupulous about recording details. Recognise this man existed before the photograph was widely distributed. If he wanted to take notes on the design of a device he had to break out protractors and measuring tape, and he did. So thorough were his notes that his experiments were easily reproduced, multiple times, by other scientists. We know this about his notes because he refused to seal them. He never applied for a patent, he never tried to close his work off to others and when he passed away he made sure the work was public because he believed ‘science belongs to science.’

I guess the thing that most sticks out to me is this quote:

“Workers must root out the idea [that] by keeping the results of their labors to themselves[,] a fortune will be assured to them. Patent fees are much wasted money. The flying machine of the future will not be born fully fledged and capable of a flight for 1000 miles or so. Like everything else it must be evolved gradually. The first difficulty is to get a thing that will fly at all. When this is made, a full description should be published as an aid to others. Excellence of design and workmanship will always defy competition.”

Hargraves described scientific discovery as work, and he advocated cooperation vs competition to overcome great, almost impossible challenges. In an environment of hypercompetitive markets defined by flying machines, these words from a man who is in no small part responsible for flying machines happening at all should be taken more seriously.