And now we come to the very last of the Australian bills. We’re almost done with this little tour of bills – having already done 5, 10, 20 and 50. 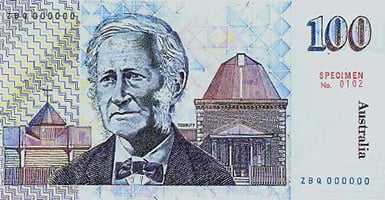 The old printing of the 100 featured on one side, John Tebutt, who can be simply desribed as ‘an astronomer.’ He discovered a comet, or specifically ‘the great comet of 1861,’ which was kinda neat, but there was no way to tell the people in the Royal Society in England about it because hey, the Pacific Ocean is quite a thing let me tell you. When the findings were checked and dated, Tebutt was correctly attributed as the first discoverer of that comet, and that’s where most folks’ stories would stop.

Instead, Tebutt went on to hand-build his own observatory near his dad’s home, and spend the next fifty years studying the stars from a position that had been largely untested. The rest of his career was tireless study and publication.

What’s really interesting to me is that in this printing he completes the arc of all of our currency featuring a scientist on it. 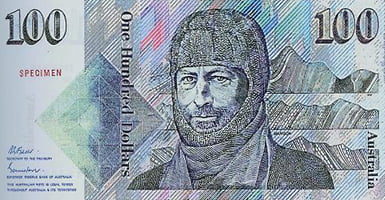 Douglas Mawson was also a scientist. But instead of building something in his dad’s backyard, he went down to Antarctica to study the rocks there. Mawson’s story of exploration of the Antarctic is sadly one of those stories that, like so many other exploration stories, has tragic and sad components; while Mawson lived to tell the tale, many dogs didn’t, and just bringing that fact to mind makes me sad.

On the other hand, it’s kinda weird that our currency featured a dude who once ate dogs.

It was pretty dire as experiences go, I don’t want to act like he’s a bad person. It’s just sad anyway.

In the second printing, however, rather than Antarctic explorers, we have Dame Nelly Melba, whose claim to fame in common parlance is the time someone else named a dessert after her, the Peach Melba – a dish ironically that features none of the name she’d been born with, but was for the name she chose. Nelly Melba, aka Helen Porter Mitchell, was one of the most famous operatic sopranos of the early 20th century.

What makes her significant in our history is that there was a point, in all seriousness, where we, a nation that claims to thrive on music and culture and art and poetry and science, were considered a place that could not yield actual artists, could not create actual ‘real’ culture. And from this came a woman whose voice thrilled the world.

Monash, whose name most commonly connects to a set of university campuses in Sydney, was an engineer who, when Australia was looking for a general, thought he could do a bit of that warring business. It’s kind of funny to me in hindsight that he, as an engineer, fills out the scientist requirement of this bill – because we often joke that engineers aren’t ‘scientists.’

John Monash was appointed to a leadership position for infantry in the First World War – a position that was met with resistance because this Australian was also a German and also a Jew.

If you know First World War history, the classic line is that the troops were lions commanded by donkeys. We created technology that outmoded our tactics; monstrous machine gun nests which we threw soldiers into, watching them being torn apart and somehow thinking that the progress we made was enough. It was a terrible, dreadful conflict, the kind of thing we don’t tend to even glamourise (except when someone in Britain wants to do a Christmas sale, rather tastelessly), and generally, we see the generals in charge of it as ignorant, at least.

Monash, however, was a technologist. He firmly believed that there needed to be a change in mindset of the military, a change that did not take root until years later, in the second world War, thanks to another German general: Rommel. Specifically, Monash had this to say about the role of the Infantry in the military.

the true role of infantry was not to expend itself upon heroic physical effort, not to wither away under merciless machine-gun fire, not to impale itself on hostile bayonets, nor to tear itself to pieces in hostile entanglements—(I am thinking of Pozières and Stormy Trench and Bullecourt, and other bloody fields)—but on the contrary, to advance under the maximum possible protection of the maximum possible array of mechanical resources,

Monash was hailed by other generals for this push, though they didn’t seem to listen to him very much. Eventually, when he was given full command of Australia’s military, he instated policies that called for an advance in technology to diminish the risk and harm to people.