Here’s the idea: Players sit down and assume the roles of actors reuniting after years apart, who used to work together on a successful, formulaic sitcom. After the sitcom, one member of the cast had a very successful career while everyone else did not – the ‘Star’ of the game.

The mechanic that sets this game up is that each player gets a card indicating their role and the degree of fame they have. Then, starting with the player with the highest value card, players close their eyes – meaning that the player with the highest value card has no idea about how anyone else’s career went, but everyone else can see the people who had more successful careers than they did.

This one-way information is meant to play into the game, because the sitcom was a mess behind the scenes. And the hopeful aim of the game is to create a short story, told in flashback, about what the sitcom was like, about what’d happened since, and about the kind of people they were, all told by the oblivious Star piecing together the narrative of what happened to a life that had nothing to do with them. 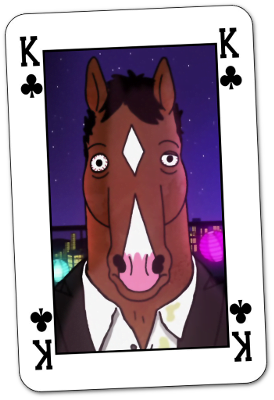 The obvious inspiration for The Reunion was Bojack Horseman, which has a lot to say about the way TV comedy gets made. The thing is, the stories of how TV series were made are all so full of extremely strange stories where so many things go wrong, where you can change or replace any given incident and you’d still have a distinct story.

Now, this central mechanic, where there’s a pyramid of knowledge, excites me because it’s a fun puzzle. One player has to start putting together four or five secrets from the things they can be told, while the other players are trying to tell their parts of a story without breaking character. At the same time, though, this isn’t guided – it’s not like Dog Bear where there’s someone in charge of the game who can be told to steer the game to an actual story point.

The really scary thing to me about this game idea is how do I keep it from getting Content Warningy? The whole point is to give players some reign to create, ideally something ridiculous and hyperbolic, but also with a dark twist as to what things were really like. And when you give people a set of prompts about the failures of a creative process, there’s always this part of me that worries people will take it to a really dark space.

In Dog Bear, there’s not just the Boss guiding the game who I can directly entrust with the authority to keep players from being assholes, but it’s also comically ridiculous, with its cyberetch and nanomachines. Not the same thing here. And now, these are the constraints that the design needs to overcome.