When I compare Onslaught to Khans of Tarkir, it is doing so with a knowing eye of the imperfection of the comparison. Khans of Tarkir was not a tribal set, not in the same way that Onslaught tried to be or Lorwyn was. Indeed, Onslaught and Lorwyn stand on a spectrum of tribality. Onslaught has a lot of tribal – but Lorwyn is bursting with it. Lorwyn is the set that Onslaught looks at and says hey there, whoah, maybe ease back on it a bit. 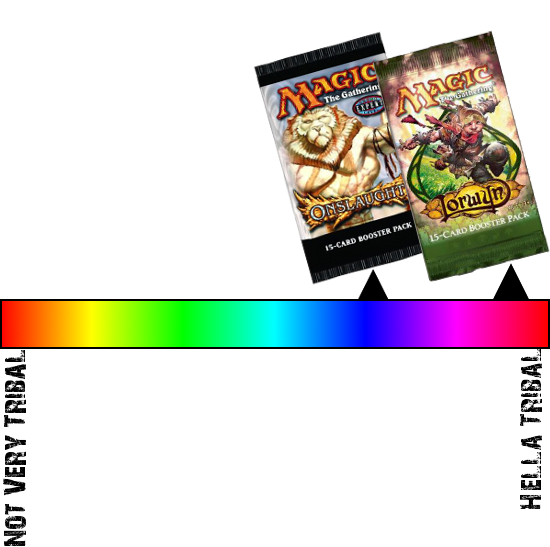 Honestly, Lorwyn‘s tribal theme is overwhelming. There was basically no option to draft that set if you didn’t open a bunch of lords, for example. The tribal themes meant that mechanics connecting types were really explicit. Some tribes just had ways they worked and they were nice and obvious. Some cards were meaninglessly bad without tribal support. Some cards were overwhelming. You could draft the first booster, find no lords, and just drop, because the format was that twisted around them. That is some messed up junk!

We have this example then that Tribal, mechanically, can go too far. Khans did not go that far – Khans sat on the other side of Onslaught – there’s clearly a tribal subtheme, there’s some thing that connects some creature types together, but it’s not the same Lorwyn-style Lords-And-Chaff design. 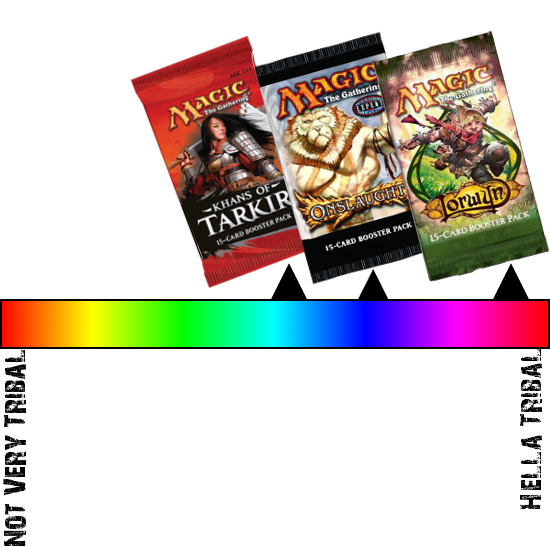 The thing that makes this comparison work to me is that the Khans style lets a player connect to the essence of tribal, it works with tribal, without actually needing tribal mechanically. And it does that by touching on the essence of what makes Tribal exciting and compelling – it does it with identity.

The thing is, players are drawn to Tribal mechanics for some reason. Even when those cards don’t seem to have any mechanical commonality, or even problems between two cards that share types, players will often stick cards together because they have that commonality that they feel is important. Goblin Balloon Brigades do not care whether or not they are alongside Goblin Goons, but there are people who will put them together.

Khans of Tarkir does not have an intense tribal theme – not really – but it does include a number of cards that are strong on characterisation. They have feel and they have identity. If you make a Mardu deck, within the space of Khans, you get the feel for how the Mardu cards work. You know what Mardu means. This deck will feature goblins and warriors and probably a demon or two? But it’ll still feel Mardu. You know how to feel Mardu. You attack. You punish. You do not retreat. Power and aggression and honour, all in a pile of terrible violence, tumbling down over the heads of your opponents. That’s Mardu.

Same thing with the other clans – they stand apart, and with their clan mechanics – even as only a few cards in a deck – they hold a feel together, and they give players an identity to connect to. These clans serve to unify under a theme the way that tribal cards do, without necessarily creating the tightly-wound mechanical problems you saw in Lorwyn, or the confused overspreading you’d see in Onslaught.

Khans managed to be tribal (in the mind of the player) without being tribal (in the mechanical constraints). And then you could see all the cards designed for enemy-colour pairs that could fit into different clans, and marvel, momentarily, at the sheer work that went into making sure Khans of Tarkir stood apart from its history.