You know for all that D&D is seen as a story of heroic fantasy it’s awfully bitsy. I don’t just mean the way that D&D is a game that encourages a truly remarkable amount of special acquisition of items for play – how many people do you know who have a miniature for their characters? – I mean that the story that plays out in the game winds up being about stuff. Lots and lots of stuff.

I’ve been writing about ‘stuff’ in games lately, reading about how we treat material objects, and while there’s definitely a different kind of materiality when you talk about a playing card, a dice and a meeple versus the text on a page that reads +3 longsword, there’s still something to be said about the way that D&D, 3.5 and 4e especially (because those are the editions I know) focus characters over an inevitable wardrobe full of stuff. 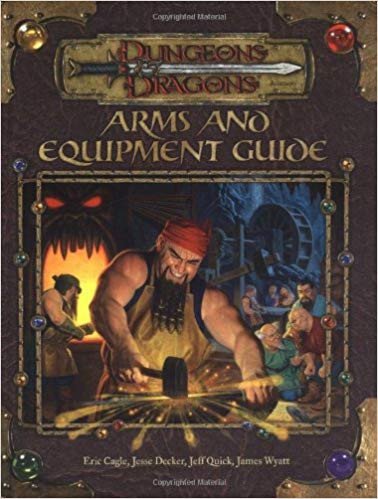 Now, there’s a reason for this, and it gets at one of the basic assumptions of the game that D&D wants to be. D&D ostensibly is a game about heroic fantasy, but connected to the idea of this heroic fantasy is a need for adventurers to be mostly, heroically empowered but still fundamentally scaled heroes that can be compared to normal people. It’s not the X-Men, it’s a place where your hero who swings a sword can’t be expected to cut through the bars of a prison, but if that sword was magical, then they could.

Now, this isn’t a bad thing per se, but it does tell you something of the basic assumptions of a world like Dungeons & Dragons and it’s a basic assumption that I’m used to seeing in a lot of, of all things, first person shooters. Yes, I’m probably going to talk about DOOM again, maybe. 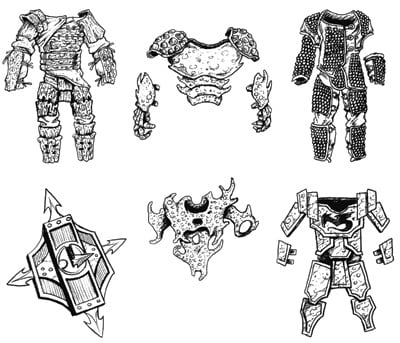 When you start to talk about what stuff is used for in D&D, it’s pretty easy to see that stuff can do a lot more than people can do. People are limited, they’re made of meat, and they’re not capable of long-lasting, permanent effects. Even the wizard has to spend spell slots to fly, but a pair of winged boots will take you into the air as long as you like. The boots are expensive, and that’s another element (the relentless roll of capitalism).

One other thing is that items can be systematised, because objects, we believe, behave consistently and repeatedly. Despite the fact that the D&D world is typically represented as pre-industrial (except the good ones), these items are made and represented as if they are in their own ways kind of mass-produced; a jagged fullblade from one continent will work the same as a jagged fullblade from another.

This is another funny detail about this worldview: The items you’re building and examining are being treated as if they’re just making a thing that can exist; it’s not a matter of someone choosing to create something to overcome a task or have an effect (and indeed, if you approach a DM with a specific request for an item function that isn’t from the existing ruleset, that can be seen as asking for something ‘too specific’). It’s not that you made a weapon that does more damage when it hits an opponent in a vulnerable moment – it’s that you made a jagged or vorpal weapon, and those existing elements have math to them.

Stuff gets to be consistent! Stuff gets to work, and keep on working! We live in a world full of machines that work consistently until broken, and it seems that that plays into how we want magical devices to work in D&D. We don’t find that unrealistic, that a character can wander around in a small town’s economy’s worth of super-specialised consumer goods that literally nobody non-Adventurey could afford to meaningfully buy, we don’t find it unrealistic that these objects can be somehow mass produced and we don’t find it odd that these things can do much more than a person can do, because we accept that it’s okay for objects to do these things…

… and that it’s not acceptable for people. 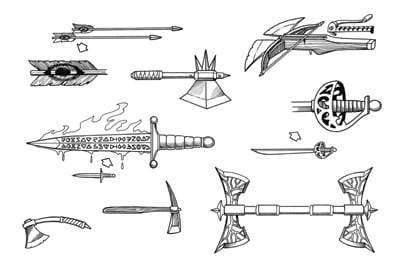 This plays into the way that the worlds of D&D are made, by the way. Not only are places like the Realms and Eberron full of underground caches full of fantastically expensive and yet still practically useful antique hardware, they’re also places that mysteriously have investors and traders who can be bothered making these goods and trying to sell them on despite their fantastically obvious market problems.

This relationship to stuff is one of the things that breaks easily when you start trying to use D&D for other stuff. Infamously, the game D20 Modern tries to dispense with the relationship to stuff, making mose equipment mundane and focusing the game instead around the ‘wealth check’ that gave you a general idea of what you were capable of buying. The result was that your stuff suddenly didn’t feel like it mattered, but your character never mattered as much as their stuff – so you mostly spent your time piloting around a pair of guns and a skill list.