In Magic: The Gathering, there’s a character called Jace Beleren. You probably have heard of him. You really have if you’ve hung around me for any length of time, because I tend to make fun of him a lot. Yet for all that I talk about him, I very rarely talk about him. I tend to just make fun of the concept of him, and that’s meant to be funny in and of itself:

Also “What’s Jace up to? Let’s Check on Jace!” and “Jace Died On The Way To His Home Planet” https://t.co/8nr9zDSiUh

Jace is a character pulled between an unfortunate series of limitations and I think it’s worth my time to sit down and actually address them – because there is not one Jace that we talk about. There is a complicated, intricate web of Jaces. Come with me, beyond the fold, to the Jaceception.

First of all, Jace, the character, is bound to the needs of Jace, the Marketing Tool. Jace is a character created to fit an advertising archetype. Wizards knew they were shifting away from heroes unlike the players with the end of Time Spiral block, and introducing Planeswalkers. They were planning and making choices about Planeswalker characters in order to serve this marketing directive, and that means Jace was going to be in the collective stuff of the game, regardless of how the actual introduction of the character worked out. 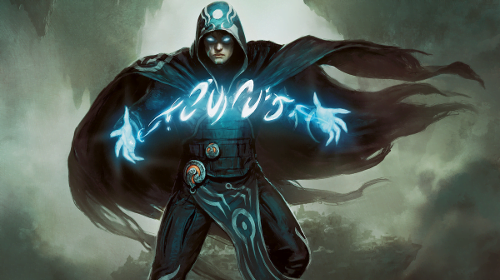 Jace was going to be on booster boxes and advertising materials, and this incarnation, this character, was made to reflect what marketing and brand could best interpret as the reality of what would resonate with their player base. This meant that there’s a Jace who’s a demographic. This Jace is, well, he’s not really much of a character. He doesn’t do anything, really: he’s just there to be a symbol, a presence. He’s an icon.

The problem with this Jace is that he’s everywhere. He’s on the posters, he’s a centerpiece in art, he’s on standups and game mats and he is, very importantly, brand. It’s very easy to feel like Wizards make Jace look extremely important: They are.

There’s another Jace. The Jace that exists between the minds of players based on an impression, based on a tone, and based on what we’ll call… 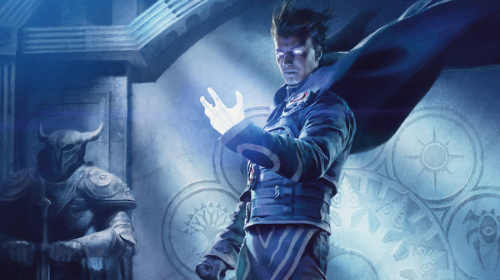 You know what no, let’s just be honest about it.

It’s not hard to go back and find these cards. Cards like Essence Scatter, Redirect, Counterspell, Lay Bare, and Control Magic have all been printed with Jace flavour text, flavour text that players experience and tends to show up at points in play when players are most likely to be annoyed.

There’s a real kind of unfortunate shadow-boxing here. Because the thing is, this flavour text is by no means different to the genre of flavour text on counterspells that was extremely popular for years before Jace’s arrival. It was often unattributed, or attributed to short-lived characters – rarely did these things have a consistant or recurrent voice.

Basically, Wizards gave players a voice they liked, but this time, attached it to a personae, a persona that players could connect to, and there, the players realised, that person was a total dink they didn’t like. There’s some natural contrariness, of course; when a player does a cool thing in a game, maybe it feels bad that another character is getting the one-liner.

I’m not trying to say these complaints are illegitimate, by the way. The character that was created in the space players experienced, with the tools Wizards used at the time, was very easy to dislike. Regardless of how sensible that dislike was, it’s still there… and this Jace, this character, is still a butthead who I really don’t want to deal with.

And then there’s the Jace who we were first introduced to. This is a minor thing – really – but it’s enough to stick in the minds of people who care about these things. When Jace was introduced at first, there wasn’t a lot of certainty about how he should, well, be. You see this sometimes referred to as early installment weirdness, where work that’s still dealing with responses and feedback from the community makes choices that maybe, later on, look silly.

This weirdness from the period when they were finding their feet meant that details that maybe should have been mentioned (like Alhammaret was a huge Sphinx and also kind of a total jerk) weren’t. It wasn’t really until Magic: Origins that there was a robust idea both of who Jace really was, and how his story worked. 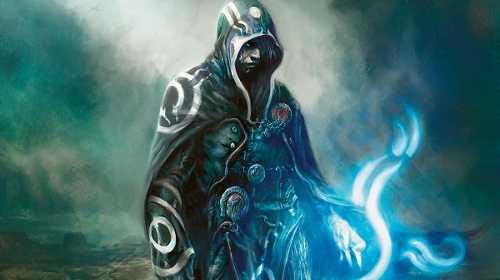 Now, the nice thing about the Jace that we wound up with is he’s a telepath, a mind mage. What that means is that Jace can always have an excuse for weirdness in his memory, for errors of omission or declaration. Any time he doesn’t like what his memories say or do, he can wipe them out, to avoid the stress or agony of those memories – and that creates some of the new tension that we’ll get into later.

This sort of early-on oddness is a minor thing! But it still means that there’s stuff about Jace, stuff about how Jace was, that is kind of not really how Jace is. And it means there’s more confusion about who people mean when they talk about Jace.

Now let’s talk about Jace, as I’m reading him, in the new, current stories.

Wait, before we do that, let’s talk about the Gatewatch, his hero squad buddies. 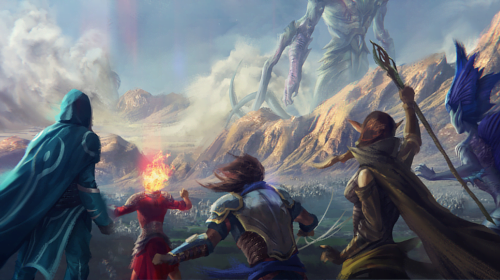 The Gatewatch characters that we’ve seen fleshed out heavily are characters based around a really simple, graspable structure: The things they are good at are not necessarily the things they want. This is a really reliable, really good superhero trope; power doesn’t solve your problems, power gives you a different set of problems. This is best illustrated with the two easiest examples:

Gideon is a character whose special ability is being invulnerable. He can’t (mostly) be hurt, which means he’s good at surviving things. Except, as his first encounter with Erebos showed, Gideon cares more about the people who fight alongside him than he does about his own survival; being invulnerable just means being able to stand and see the people he cares about dying. In Amonkhet, Gideon was happy to undergo the trials, and suffer, but when he saw someone else being hurt, it broke his perspective on it. Gideon wants to Save Everyone, and his powers inherently only let him Save Himself.

Chandra is a character whose special ability is destruction. She wrecks things, and she’s really good at wrecking things. Thing is, Chandra as a character would much rather be hugging people, lounging around, casually chilling out and indulging her wants. Yet, when it comes down to it, what Chandra is empowered to do is wreck things. Which means Chandra, typically, is looking for things she can damage in order to take care of people. She is, literally, a character with a hammer always looking for nails.

Where does Jace fit in this model? How does his what he does conflict with what he wants? 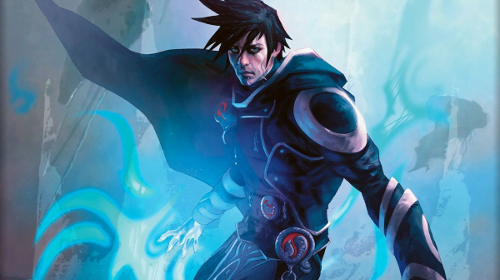 What Jace wants, I think, more than anything else, is to be an okay person. Not a high bar to reach, you’d think, but then he has to face up to the fact that the tool he has is something that makes it very easy to be a bad person. He’s a telepath, his powers let him deal with memories – they even let him manipulate his own memories. And worst, that last little clause means he’s always going to be doubting whether or not he is a good person.

This is part of his philosophical outlook, as a blue character: Jace believes we are not born to a thing, an inherent attribute of a thing, but we are the byproduct of our actions, our choices we make. He thinks of himself, as a tabula rasa, and everything he has done since that beginning forms Jace, the person. And this brings up one of those conflict points:

Is Jace, the person now, the same person, as Jace, the person who forgot everything? Are they different people? Jace is afraid that these two people migth be the same person. Jace is afraid he might be, in a way, responsible for the actions for someone who could be considered a different person, and that means he’s left with this constant, nagging, persistant fear that he’s a bad person, that a form of him, once in the past, did something unforgiveable, then made him forget it. It’s after all, a very clever plan.

Every time Jace uses his powers in a way that skirts the moral line, it bothers him, and it bothers him not because of just its moral outlook, but because he’s afraid that represents who he really is.

Which is also, in a way funny: He’s bothered more by what his actions say about who he is than he is about how they impact other people. Which, you know, isn’t a trait of great people.

The Sum Of Jace

At the bottom of all this, under all these layers, in the narrative, creative space that the game presents, in service to and against the conflict of all of these, there is, I hope, room for Jace, the character. Or rather, the many more Jaces of the story. The interpretation. 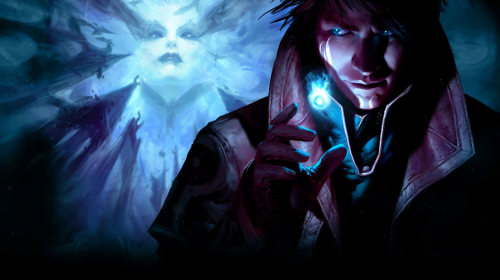 Jace as a character, in the fiction, is someone I kind of like. He’s a bit of a dork, he’s not as smart as he thinks he is, but he wants to try to do good, and he’s such a fussy nerd he’s bad at realising he needs to ask for help. His worldview informs his behaviour, and he recognises just how morally dubious telepathy is as a power.

The problem is, that that’s not the only Jace out there. And Jace the meme, Jace the Poochy – the Poochy people actually like – is still really annoying. And losing to Jace The Mind Sculptor, no matter how you cut it, is going to sting. There’s a dink Jace, there’s a marketing Jace, there’s an Old Jace. There are missteps about how to handle the character, how to present the character, but that’s not the same thing as the character himself being inherently bad.

The thing I have to remember, though, is when people talk about hating Jace, they might not even be talking about the same person as me.