Confederate monuments are not monuments to history.

Well, they are, but that’s not what they are.

Every single work of art chooses what not to depict. Like every single map chooses to leave out details in order to represent the information it cares about, every single artwork has to choose a point to stop telling you what surrounds it. And Confederate monuments aren’t about the history that is.

They’re about the history that some people wishes there was.

Look at them. Look at how they present the people and events. Heroic struggles against a foe, a very unspecified foe, for an equally unspecified reason. As the Lions of British public works fail to remind you that the Lion is not native to England, and in fact, the people of England did a lot of harm to the places that have Lions, the image and the icon were taken for their own expression, for what they could make people feel about what they wanted to be true.

Now, I want to show you an example of this kind of art, but presenting this art without context inherently allows the art to speak for itself. So I’ve made some subtle annotations to the artwork so you can focus instead on the art as an object of intention, that it was something someone constructed and why they did it. You know, rudimentary postmodernism, questioning the base assumptions of our art. 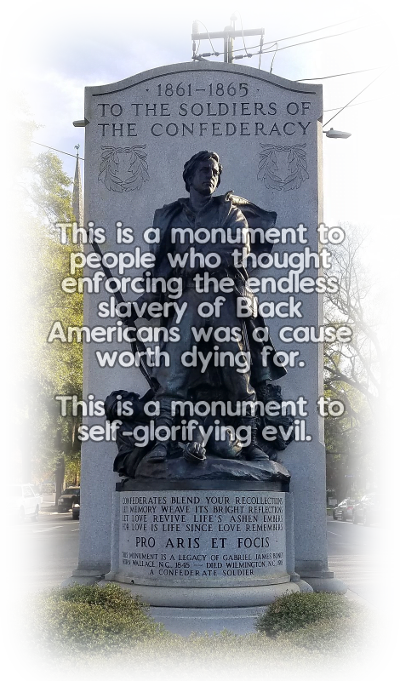 The soldier is presented with a raised foot, holding a weapon, looking nobly at the future; the figure is shown as powerful, whole, is constructed and crafted in a single colour but with shapes that suggest the blowing of wind, the vivacity of life cast in metal and stone. There is an inscription full of importance and vigor, in the language of our culture’s view of Value.

The Public Art of the Confederacy, which presents soldiers alone, in positions of glory, and valour, and success, are presented as skilled and noble. They are in uniform, they are standing at attention, they are glamorised. You don’t get statues showing them throwing black infants into a river; you don’t get the statues that show these people as part of long-term and constant genocide. The history that you’re seeing, then, is not the history of what happened, but rather a tiny, tiny window into something that did happen, and by ignoring everything else, a dsesperate aim to keep the rest of that information hidden and lost. Let these people look noble, and do not think of every single round they shot, every wound they took, every personal deprivation was in the name of continuing the generational torture of Black Americans.

There is a generation of Southern Americans, growing as the conservative movement carries this vile meme with it, who are convinced that The Confederacy Wasn’t That Bad Actually and this art is part of why. These statues, these statues to men and women who hate America, who stand proudly and nobly against the American ideal of No Slavery, they are art that wants to make their evil normal, and acceptable, and calmly casual.

Your art shapes your world.

And this art glorifies evil.

If you want to keep it around, if you’re against the idea of the destruction of art, which usually is used as a way of examining art as inherently intransient, which is its own problem, but if you want to keep this art around, then you owe it to your culture to put it in context. Surround these statues with monuments of the lynched and slain. Add plaques commemorating the invisibly dead who did not get to be valorised in death because their crime was being born into a black skin under someone else’s ownership.

Or tear them down, and put them in museums, the Ways We Try To Forgive Ourselves For Genocide Museum.